Chronicling the feminist art world from the ground up 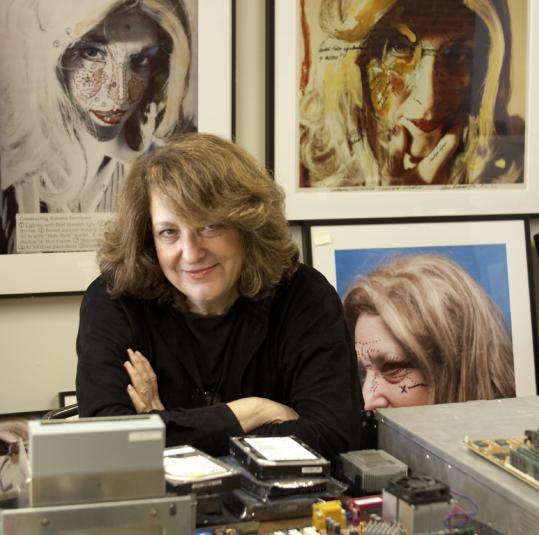 In an age when memoir is ubiquitous and reality TV has eclipsed scripted drama, it’s sobering to recall a time when feminist artists were ridiculed and excluded for connecting the personal to the political and channeling it into art.

“If you could identify, if you reveled in emotion [in your art], you were breaking the rules. It was all form and no content,’’ says Lynn Hershman Leeson, whose film “!Women Art Revolution’’ — or “!W.A.R.’’ — documents the history of the feminist art movement. It opens Wednesday at the Museum of Fine Arts. “What the feminists did was truly radical,’’ she says. “They had to invent forms’’ for their expression outside the white-male-dominated gallery-museum culture.

Leeson, herself an artist in the mid-1960s, borrowed a camera and spent the next few decades filming friends and colleagues in her Berkeley, Calif., home, along with demonstrations, exhibitions, street art, and performance pieces. The result was several decades’ worth of archival footage and interviews with the artists of the ’60s, ’70s, and ’80s who had faced a discriminatory art establishment, broken barriers, created innovative art, launched feminist art programs at universities, and set up exhibition spaces like the Woman’s Building in Los Angeles and A.I.R. Gallery in New York.

Judy Chicago may be the sole household name among them — largely because her landmark work “The Dinner Party’’ was derided as pornography on the floor of the US House of Representatives — but Leeson points out that Chicago was hardly alone. “These women worked for years, and no one paid attention to them. Now they’re getting mentioned in reviews of the film and many of them are finally being paid what [their art] is worth,’’ says Leeson.

Judith Baca, Adrian Piper, Faith Ringgold, Eleanor Antin, Nancy Spero, Martha Rosler, Yvonne Rainer, Carolee Schneemann, Faith Wilding, Hannah Wilke, Martha Wilson, as well as curators, academics, and critics, testify in the film to the seismic cultural shift brought about by the feminist art movement. Spero humorously recalls being derided and humiliated when she showed her portfolio in the ’70s at New York’s Leo Castelli Gallery. Art historian Amelia Jones says that, as an undergraduate at Harvard University, “I don’t think there was a single woman artist whose work was discussed in any one of my classes.’’

Leeson, who has directed three feature films — “Teknolust,’’ “Conceiving Ada,’’ and “Strange Culture,’’ all starring Tilda Swinton — says the significance of her footage surprised even her. “Marcia Tucker [former Whitney Museum curator and New Museum founder] is such an important art figure in New York and no one else ever did a video interview with her,’’ Leeson says. “When she died, they came to me. That’s shocking. This is the only footage that exists of many of these artists.’’

So what took so long to put it all together? Leeson says the sheer volume of material was daunting. In 2004, she began to examine her raw footage and ended up editing the film herself, a four-year process. “It was excruciating. I could not do my own art; I could only do this. When I first began filming in the ’60s, I didn’t know this would become a movement. There was so much good information, but who would I put in? How would I make it all work? I wanted the film to be clear and entertaining and funny, not a bunch of angry women complaining — that’s what the propaganda always said. I wanted to put the best story out there and in a way that people would want to see it.’’

The key for Leeson was to bring the film full circle by including young women artists such as Miranda July, Cindy Sherman, Jenny Holzer, and Janine Antoni who were influenced by and benefited from the feminist legacy, even if they didn’t know it. Leeson also expanded “!Women Art Revolution’’ into an ongoing project that includes a website, curriculum guide, and 100-page graphic novel she created with young artists Alexandra Chowaniec and Spain Rodriguez.

“I worked with women who are in their 30s and have no idea what it was like back then. . . . It’s changed in the last few years with women philanthropists who’ve created interest in and a market for women’s art,’’ says Leeson, who has seen her own artwork from that period rise in value because “it’s now considered pioneering,’’ influencing artists such as Sherman. She was able to finish her film thanks to money from the sale of her art.

Leeson says that after 42 years she was able to complete the film because she found an ending, which isn’t an ending at all. In partnership with Stanford University, she established a complete interactive online archive (rawwar.org) of her raw footage and information about all the artists. “This opens it up to a different technological generation. It will grow and continue,’’ she says. “I wanted to do the project as well as I could to create an understanding of the era. This isn’t a closed story.’’