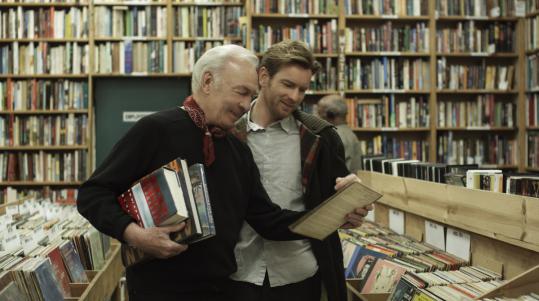 Christopher Plummer and Ewan McGregor play a father and son in “Beginners,’’ a story that writer-director Mike Mills based on his own relationship with his father. (Focus Features)
By Loren King Globe Correspondent / June 5, 2011

Filmmaker Mike Mills’s “Beginners’’ is an autobiographical portrait of his relationship with his father. But it has another, more unlikely inspiration: Errol Morris’s 1988 movie, “The Thin Blue Line.’’

That documentary’s visual grammar struck a nerve when Mills saw it in 1993. He was then a successful graphic artist, a graduate of The Cooper Union and designer of album covers for bands such as the Beastie Boys and Sonic Youth. Morris’s stark images in the film — “a milkshake line, taillights, and shots of evidence,’’ as Mills put it — convinced him he “could make something like that.’’

“Beginners,’’ which opens Friday, is about two fresh starts: Oliver (Ewan McGregor) is a graphic artist on the brink of a serious relationship with Anna (Melanie Laurent) as he’s grieving the death of his father, Hal (Christopher Plummer). Hal, a museum director, was essentially reborn at 75 when he came out of the closet and embraced an openly gay life. Oliver’s memories of his father’s joie de vivre, even in the face of illness, inspire him to take a few risks of his own.

Mills’s second feature (his first was 2005’s “Thumbsucker’’) is a memory piece that drifts back and forth in time and blends nonfiction flourishes such as historical stills and Pop Art-style expressions of characters’ thoughts. “To explain 1965 or 1938 — does this phone help you understand it? Or does watching people kiss? The sun? The stars? There’s a piece of Mr. Morris in that for me,’’ says Mills, 45, in town last month to present “Beginners’’ at the Boston Gay and Lesbian Film Festival.

“This filmmaking style is really me. I went to art school, not film school, so I have that language. I think like that, but you don’t have the nerve to ask to do it in a feature. I do think I was in a life crisis when I wrote the film. My second parent had just died, I was 38 years old. I wasn’t at all sure that the world would let me make this film. But it’s the film I’ve always dreamed of making. I put all the elements of my life into the film.’’

The central nugget of the film happens to be true: The director’s father, Paul Mills, former director of the Oakland Museum of California, came out at 75 and died of lung cancer four years later. Other aspects of the film are not strictly autobiographical.

“I was very free when writing. Even when doing a portrait, by the time you write it in a scene and location, it’s fiction at that point. I embraced that and wanted that. I took facts from my parents’ biographies, but I knew this was my version of the story. My two sisters, or my dad, would have different versions. My dad was an art historian; he would get that. He fictionalized his own life for a long time,’’ says Mills who in the 1990s played in a band called Butter 08. He shouldn’t be confused with the R.E.M. bassist also named Mike Mills.

Oliver’s rocky romance with Anna may be fiction, but the film’s depiction of the bond between son and father, including the father’s romantic advice, is not. “After my father came out, he was more electric and fully there. In truth, it was messier; we argued, but that was wonderful. It went from polite to messier, more real. He became engaged in my life and in my relationships. We had amazing conversations that weren’t happening before. I wasn’t done with that conversation when he died. Even if it didn’t happen to me, I’d want to write that,’’ says Mills, who last year married artist and filmmaker Miranda July, whose “The Future’’ recently screened at the Boston Independent Film Festival and opens here at the end of next month.

Mills also instructed Plummer and McGregor “not to be burdened or feel limited by me and my dad. I told them, ‘Make it your own,’ and they understood that.’’ McGregor, he says, quickly bonded both with Plummer (“a charming, mischievous rascal who’s so engaged and open to something new,’’ says Mills) and Cosmo, the Jack Russell terrier who nearly steals the film as the dog Oliver inherits from his father.

“Ewan was great at working with him, he was respectful and generous to the dog as an acting peer. He ended up getting a dog as soon as we finished, not a Jack Russell but a poodle mix,’’ says Mills. “I inherited my dad’s dog and he passed away when I was writing the film. Dogs are a big part of my life, but I didn’t get what a commercial hook it was, having a cute dog in a movie. He’s in the poster, the trailers. He deserves it all.’’

The dog may have been an easy sell, but not Mills’s storytelling élan. Critics may be wowed by his originality but “when you’re not an established actor or director, that’s a negative to potential financers. It’s so easy to get talked out of it or yelled out of it,’’ he says. “Especially all the stills and history parts; people were saying, ‘Really? You’re going to do that?’ It’s funny to be reminded how diametrically opposed these forces are. I’m lucky Ewan liked it, or I wouldn’t be here.’’

Mills plans to make another feature, but right now he’s just enjoying the positive reception “Beginners’’ has earned on the festival circuit. “I have the best job in the world. I love every part of it. I love going city to city to talk about the film to strangers who go into a dark room and watch your thing for 100 minutes. That’s crazy in this day and age; such a weird, old, magical ritual,’’ he says. “I hope I can keep doing it because movies like this are not what the market really wants. So I don’t take it for granted at all.’’