Hey, Boo: Harper Lee and "To Kill a Mockingbird" 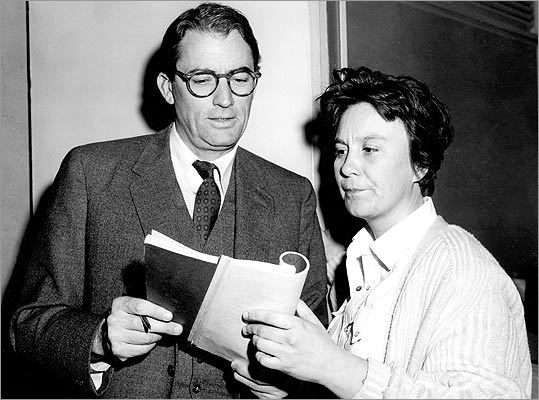 Gregory Peck and Harper Lee on the set of “To Kill a Mocking- bird.’’ The film version of Lee’s 1960 novel was released in ’62. (Universal Pictures/Photofest)
By Mark Feeney Globe Staff / June 1, 2011

Here’s a riddle. Why is any documentary about Harper Lee like a doughnut? Because both have a hole in the middle.

The author of “To Kill a Mockingbird’’ hasn’t given an interview since 1964. Hard as it is to do a film about a writer, a creature whose imaginative life is lived internally, it’s that much harder to do one where the writer stays off-camera. At least we see photographs of Lee in Mary McDonagh Murphy’s reverently chipper film, “Hey, Boo: Harper Lee and ‘To Kill a Mockingbird,’ ’’ and get to hear her voice.

Murphy tries to compensate for Lee’s absence with lots of presences. As might be expected with a book that’s sold more than 30 million copies, “Mockingbird’’ has many admirers. A lengthy parade of them appear in the documentary. Oprah Winfrey heads the list. “I devoured it,’’ she says of the book. “I wanted to be Scout,’’ she notes of the book’s narrator. “I thought I was Scout.’’

Others include Tom Brokaw, the singer Rosanne Cash, and a raft of writers: Anna Quindlen, Wally Lamb, James McBride, Lee Smith, Mark Childress, Scott Turow, Diane McWhorter, Allan Gurganus. It’s like a board meeting of Oprah’s Book Club. Each talking head gets to read a passage (a nice touch), and we see a picture of the interviewee from around the time he or she first read the book.

“To Kill a Mockingbird’’ was published in 1960. So we see news footage of civil rights protests and related images from the era. The closest thing to a dissenting opinion comes from an otherwise-complaisant Andrew Young. “I didn’t need to read it,’’ he says of the book. “I knew what it was talking about.’’ Otherwise “Hey, Boo’’ is the documentary equivalent of a group hug, right down to the segments showing middle schoolers in Westchester County, N.Y., and Birmingham, Ala., discussing the book in class.

We hear from Lee’s 99-year-old sister (no shyness about the camera from her!), friends of Lee’s, the head of the historical museum in her hometown, in Alabama, and several people associated with the 1962 film version, including Mary Badham, who played Scout. The documentary relies heavily on clips from the movie. That’s understandable — inevitable, even — but also a disservice to Lee and her imaginative achievement. Gregory Peck in his white three-piece suit (how come he never sweats?) is an impressive sight. But it’s so much of a lesser thing than the image of Atticus Finch that Lee’s words have allowed each of those 30 million readers to create in his or her own mind.

Between the interviews and film clips, “Hey, Boo’’ intersperses Lee’s biographical particulars. She grew up a tomboy and befriended an odd little kid next door by the name of Truman Capote (the model for Dill in the novel). The documentary notes, and persuasively dismisses, the rumor that Capote wrote or extensively revised Lee’s novel, but in doing so it inflicts something of a hatchet job (did there have to be quite so many pictures of Capote at Studio 54?). Lee moved to New York and, supporting herself as a reservations agent for Eastern Airlines, she published five stories. Then came the book whose original title was “Atticus.’’

HEY, BOO: HARPER LEE AND “TO KILL A MOCKINGBIRD’’