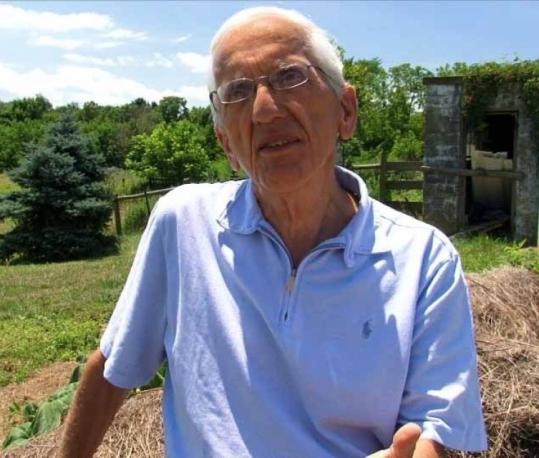 T. Colin Campbell, of Cornell University, at his childhood farm in Virginia, has researched the effects of a vegan diet. (Monica Beach Media)
By Loren King Globe Correspondent / May 16, 2011

What “An Inconvenient Truth’’ did for global warming, Lee Fulkerson’s persuasive documentary does for a vegan diet.

Despite the educational tone of the film, it’s not as dry as it sounds. Bolstered by two American doctors’ decades of separate research, “Forks Over Knives’’ offers compelling evidence that a diet heavy in animal protein and dairy leads to an increase in heart disease, cancer, diabetes, and other severe illnesses. The film delivers a concise history of Western eating habits, with graphs and charts punctuated by entertaining real-life experiences.

Fulkerson keeps the information viewer-friendly, including himself among the skeptics who are converted. He was a Red Bull-swilling, red meat-eating guy who believed himself healthy until he consulted with a pioneering doctor who urged him to alter his diet. Within a few months, Fulkerson’s cholesterol levels, weight, and blood pressure dropped. We also get testimony from Joey Aucoin who, when we meet him, is gobbling a host of medications to treat a rash of diseases including diabetes and hypertension, as he battles depression, fatigue, and allergies. After switching to a diet of fruits, vegetables, grains, and legumes, and undertaking an exercise regimen, he’s medication-free and says he has never looked or felt better.

The film’s primary experts are nutritional scientist T. Colin Campbell, of Cornell University, and Dr. Caldwell B. Esselstyn Jr., a top surgeon and head of the Breast Cancer Task Force at the Cleveland Clinic. Both became passionate advocates for a vegan diet separately after many years of research. This included Campbell’s involvement in a major study, finished in 1990, of 6,500 people across rural China that showed the incidence of cancer, heart disease, diabetes, and obesity increased in proportion to encroachment of a Western diet, including fast foods, in the country. They also point to the low incidence of disease in counties that don’t eat much animal protein and dairy, such as Japan. There’s other evidence, too: When the Nazis confiscated occupied Norway’s farm animals during World War II, Norwegians did without meat and rates of disease fell. After World War II, they returned to eating meat and disease rates rose.

So why don’t more Westerners realize the benefits of eating less dairy and animal protein? Experts interviewed in the film cite the corporate interests of big agriculture, which have influenced official nutrition guidelines for decades. But “Forks Over Knives’’ doesn’t rail against any of this. The health experts urge Americans to wake up and take control of their diets and their health.

At times this simple advice seems a little too simple; it’s not clear how, exactly, a vegan diet supplies enough protein and other nutrients over the long term and not much is made about other factors that contribute to grave illnesses. But for those who would claim that a plant-based, whole-foods diet is a bit extreme, Esselstyn responds: What’s more extreme than having your chest split open for bypass surgery?

FORKS OVER KNIVES Written and directed by: Lee Fulkerson