Director always up to task at hand 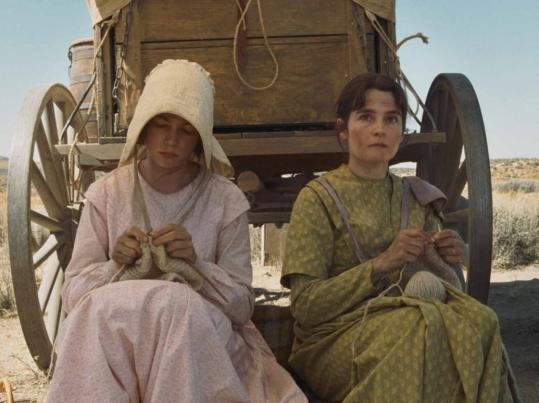 It would be unfair to describe Kelly Reichardt as a taskmaster. But anyone planning to work with her should be prepared for toil. Reichardt’s fourth feature, “Meek’s Cutoff,’’ which opens Friday in Boston and gets a sneak preview tomorrow night at the Harvard Film Archive, strands three families who’ve wandered away from the Oregon Trail in 1845. Their hope was to take a detour across the Cascade Mountains into Willamette Valley. It’s harder than it looks. And, frankly, it already looked extremely hard. Over the course of two hours, the faces of these goodly emigrants (played by, among others, Michelle Williams, Will Patton, Paul Dano, and Shirley Henderson) go from long to longing — for food, for water, for some clue that their guide, a bearded blowhard named Stephen Meek (Bruce Greenwood), knows what he’s doing.

The shoot lasted for six months, is a distillation of real events, and required the actors to haul and lug and trudge in the arid heat of teeny-tiny Burns, Ore. “I really wanted to make a film about labor,’’ Reichardt said in a two-part conversation that began in a loft atop a movie theater in Park City, Utah, then continued several weeks later over the telephone. “I keep thinking of things like [Robert Flaherty’s 1922 film] ‘Nanook of the North’ and watching someone build an igloo.’’ But it was the emigrants’ diaries that inspired Reichardt and her regular writing collaborator, Jon Raymond.

The movie introduces its wagon party at the point at which enchantment has curdled into the work of staying alive. “We had the actors come out for a week of pioneer camp, where everybody learned how to start a fire without matches and to cook bread in the ground,’’ Reichardt recalled. “Michelle learned how to load the rifle and shoot the gun. But a lot of it was learning how to walk the oxen, how to feed the animals, just all the chores one would do in a day.’’

“Meek’s Cutoff’’ is a work of furtive ambition: eight people walking from one side of the screen to the next. Big deal! But actually, yes: Big deal. The film meets a standard of both general excellence and personal idiosyncrasy that is increasingly rare in serious American moviemaking. It’s art, freighted with the politics of ownership and gender.

The Paramount Center at Emerson College has devoted the weekend to Reichardt, showing her first two films, the barely screened, understated marvel “River of Grass’’ (1993) and her critically adored study of friendship “Old Joy’’ (2006), as well as a 48-minute short she shot on Super 8 film called “Ode.’’ (All three are screening this evening: www.artsemerson.org.) Her movies have realism in common, the heightened and sustained illusion that we’ve happened upon a situation. Even when a famous actor like Williams, who was also the star of Reichardt’s 2008 film “Wendy and Lucy,’’ is at the center, Reichardt’s illusion holds.

Greenwood knew what he was getting himself into with “Meek’s Cutoff’’ but was still surprised by both the challenge (he called his character an orangutan) and the finished result: “It was difficult for me to appreciate until well into filming that that wide environment in which your character exists is speaking as loud as your character is speaking.’’ By phone, Greenwood said Reichardt doesn’t give a lot away. “She plays it close to the chest in terms of what she’s creating,’’ he said.

“Once I saw pieces of it put together,’’ he said, “I was astonished at its power: that opening sequence that has that super-long crossfade where you see the horses walking across the sky. There’s so much more information here than my loudmouth character blathering his way into the boondocks.’’

Reichardt grew up in 1970s Miami (“when it was not a happening place’’) and attended Tuft’s School of the Museum of Fine Arts in the 1980s. Boston opened her eyes. For one thing, she saw a lot of movies. She took classes on Indian cinema and on directors like Germany’s Rainer Werner Fassbinder. “Then I would go to the Brattle Street Theatre and see a different double feature every night. So the amount of film I took in in my 20s and 30s was a lot.’’

Her classmate and good friend was the filmmaker Todd Haynes, who’s one of the producers of “Meek’s Cutoff.’’ “No one I lived with was really going to school,’’ she said. “They were in bands. They were doing different things. I lived with a photographer, a painter, and we were all really integrated with the city then.’’

Reichardt worked in a mail room. She cleaned houses three days a week. After graduation, she moved to New York, where she made music videos and worked on Hal Hartley’s first film, “The Unbelievable Truth’’ (she played a tiny part and was the wardrobe supervisor). She said working on Haynes’s controversial debut, “Poison,’’ inspired her. “AIDS hit and suddenly everything sort of tumbled in that. You suddenly had to be clued in, if you were working in the film scene and all your new friends were gay. That was when I first started paying attention to what was going on — or not going on.’’

In college, she said she tried to figure out film structure by breaking movies down. She laughed at the memory of turning to a film like “Five Easy Pieces’’ to do that. “If you watch ‘River of Grass,’ it’s clearly like I haven’t figured it out yet. It has a leg at the center. I’m trying to figure something out.’’ (It’s better than she remembers.) What followed were several frustrating years during which Reichardt said she couldn’t get a film made. She even spent four futile months in Los Angeles trying, with Jodie Foster’s help, to produce a script she’d written. “I didn’t have the temperament,’’ Reichardt said, “or the social skills to make a film in that environment.’’

During this period, she was couch surfing and frustrated, but the defeat in Los Angeles opened a new door. At Haynes’s suggestion, she began teaching (she’s now at Bard) and returned to the Super 8 of her college years: “That was a way to figure out as I went along without it being expensive and without no one paying attention.’’ She also became a better editor during this stretch, which helped her figure out where to put the camera.

Meeting Raymond, a novelist, was also important since it was an opportunity to work with, as Reichardt puts it, “someone whose writing is stronger than my own.’’ They met in Portland, Ore., through Haynes. She had a copy of Raymond’s book “The Half-Life’’ on a cross-country road trip on Route 50 doing what she called the “In Cold Blood’’ drive. She was struck enough to call Raymond from Garden City, Kan., and ask if he had any short stories. One of them became the basis for “Old Joy.’’ She had given up on feature filmmaking at that point, having concluded that the movies were “a man’s game.’’ Finding Raymond helped her decide to reverse course yet remain independent.

Using the camera, she said, was better than going to a meeting and asking someone for money. And having the name-recognition of actors like Williams and Greenwood and a producer like David Koepp have, to some extent, helped make the process worthwhile for her. But she knows the kind of resolve required to work on and watch her movies. “You’re either up for the kind of filmmaking we’re doing, or you’re not.’’