A teen-friendly prom? Whose reality is this? 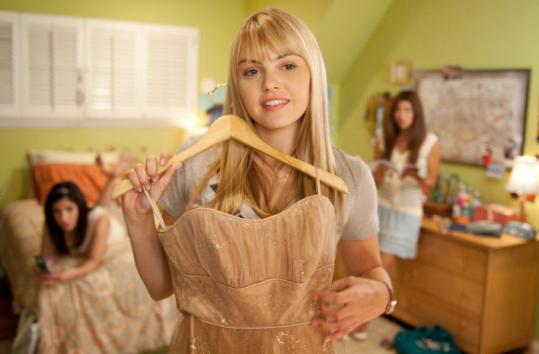 “In three weeks, ‘Starry Night’ will be Brooksides’ best prom ever!’’ No, that’s not Judy Garland talking to Mickey Rooney, or Archie to Veronica, but squeaky-clean class president Nova (Aimee Teegarden) speaking to her worshipful minions. The course of prom night never does run smooth, so writer Katie Wech throws in complications: a fire that destroys the decorations and forces Nova to work overtime with Jesse (Thomas McDonell), the class delinquent who has to help her in order to get his diploma. Good girl meets bad boy — jeepers, can it ever work out?

That “Prom’’ plays as pleasantly and inoffensively as it does is due to the performances, particularly McDonell as the rebellious Jesse. He brings the relaxed insouciance of a young Johnny Depp to his watered-down role, and he’s easy enough on the eyes for the film’s target demo. (A recent subject-heading on the actor’s IMDb message boards reads “Hello unknown hottie.’’) Teegarden may fare better on TV’s “Friday Night Lights’’; here she’s all adorable grimaces and shrugs.

“Prom’’ is deeply unthreatening stuff — “Gossip Girl’’ without the sex, “Skins’’ without the drugs, “Glee’’ without the show tunes and dysfunction — and that’s the reason for its existence. It’s a sweet, generic safe harbor for young kids, parents, and those teenagers who want to hide from the world for a couple of hours. All the girls are pretty and ethnically balanced (and if they’re not pretty, they’re funny, and if they’re not funny, they don’t exist). All the bad boys are misunderstood. There are no mean girls or bullies, nor is there a computer or barely a cellphone in sight. And at the end everyone forgets their differences and dances. Where do we sign up?