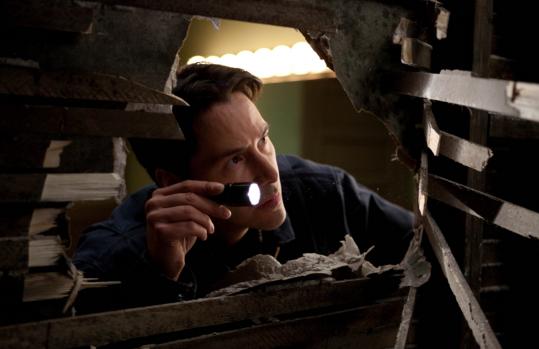 Keanu Reeves has been a major star for 25 years now without seeming to do very much at all. Sure, he saved humanity in the “Matrix’’ movies and the LA transportation system in “Speed,’’ but in both cases he seemed vaguely startled, as if he’d woken up from a nap to find himself kickboxing. Reeves’s true subject, it’s becoming clear, is passivity and its limitations — how long a righteous young dude can maintain his slack before being called to action because it’s the right thing to do or because the girl needs rescuing or, if nothing else, because that’s what we want from movies.

Reeves is no longer young, though, and as he hits the back half of his 40s, he’s possibly wondering how long he can keep saying Whoa. “Henry’s Crime’’ makes this explicit. It’s a bank-heist thriller that’s also a shaggy-dog comedy about acting and theatricality, and it moves its hero backward from near-total inertia to an engagement with life by making him take on one role after another.

If that sounds a little overloaded, it is, and director Malcolm Venville can’t always keep the script’s low-budget whimsy from curdling. Yet if “Henry’s Crime’’ is occasionally too pleased with itself, it’s also pleasantly unpredictable, and it has a trio of sweet hambone performances at its center.

One of these, surprisingly, is from Reeves himself, once his character, Henry Torne, is roused from torpor. A Buffalo toll taker who watches life pass by with the cars, the hero agrees to drive a shady bunch of friends on an errand and, without quite knowing how, is suddenly in prison for accessory to bank robbery. In a few years he’s free, slightly chagrined (Reeves plays this very well), and circling the bank again, figuring that if he did the time, he might as well do the crime.

Conveniently, there’s a bricked-up tunnel leading to the bank’s vault from the theater across the street. Inconveniently, a local production of Chekhov’s “The Cherry Orchard’’ is in rehearsals, complete with exasperated Euro-trash director (Peter Stormare) and vain leading lady. This is Julie (Vera Farmiga), who fills the world with as much egotistical noise as Henry seems to subtract from it. At this point, “Henry’s Crime’’ decides it might as well be a love story, too.

So far so good, if maddeningly self-conscious, but the best part of “Henry’s Crime’’ might be James Caan as Max, the hero’s old-school cellmate and reluctant mentor in the art of separating banks from their holdings. Max prefers being in jail — he fakes a mad-dog act every time he comes up for parole — but he allows himself to be freed less from greed than from sheer curiosity about what Henry’s up to.

The film keeps piling on the secondary characters — here’s Fisher Stevens as a weasely crook — and some of the plot twists invite ridicule, including the one that gets Henry into the “Cherry Orchard’’ cast, or the finale that rewrites Chekhov in the hopes of true love. I wouldn’t say that Reeves and Farmiga have chemistry — they’re different species entirely, like turtles and cats — but they’re fascinating to watch together, and you can tell Farmiga is charged up by the handsome slow-moving vehicle that is her costar.

Caan has one of his better roles in a while — Max is a con artist with emphasis on the art — and he brings a loopy comic zest that’s a delight to us and probably a relief to him. As for Keanu (surely we’re on a first name basis by now?), the pleasure of “Henry’s Crime’’ is watching the actor emerge once more blinking in the sun of active engagement, as a character and a movie star. If this isn’t one of his most excellent adventures, it’ll do.