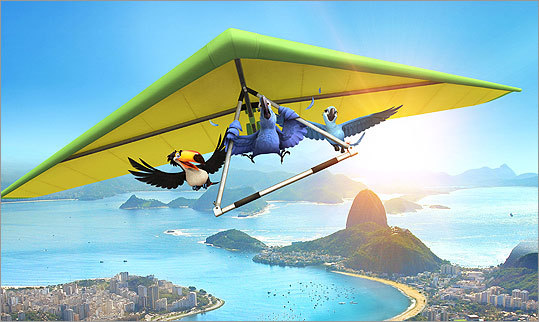 Director Carlos Saldanha, who grew up in Rio de Janeiro, says the idea of Blu hang gliding around the city was one of the first images that came to mind.
By Tom Russo Globe Correspondent / April 10, 2011

You know the work of Blue Sky Studios from the “Ice Age’’ series. Now, with “Rio,’’ that Fox animation division is hoping to plant some modern-age critters in our collective cartoon consciousness, along with an equally colorful character, the Brazilian tropicopolis itself. The movie stars the distinctive voice of Jesse Eisenberg as Blu, a virtually extinct breed of macaw whose cozy existence with his owner in wintry Minnesota goes south, comically, when they’re beckoned to Rio for a propagate-or-perish mating opportunity. (Sure, Blu doesn’t know how to fly, but conservationists can’t be picky when dealing with the last of a species.) No sooner is Blu introduced to spirited she-macaw Jewel (Anne Hathaway) than the two birds are snatched up by smugglers. The inevitable wacky escape and pursuit ensues, with Jamie Foxx’s canary, will.i.am’s cardinal, and George Lopez’s toucan along for the flight.

The movie is directed by Carlos Saldanha, 42, a longtime Blue Sky animator who directed both “Ice Age’’ sequels after teaming with studio cofounder Chris Wedge on the first installment and 2005’s “Robots.’’ Speaking by phone from the company’s Greenwich, Conn., offices recently, Saldanha shared his hopes for his new passion project.

Q. You actually grew up in Rio, so was the movie something that started with your own experience?

A. I came up with the story. After we finished working on the first “Ice Age’’ around 2002, I started to think, why not do something in Rio? I was seeing things set in Paris, China, Madagascar — but not Rio. Knowing the city, I always felt that all the visual contrasts and the culture of music and samba could make it a really fun place to set an animated movie.

Q. Given the level of collaboration involved in making these movies, is it difficult to find the opportunity to do a story that’s so personally driven?

A. A little bit. It took me 10 years and five movies to get there. I had already sold Fox on the idea around the time of “Ice Age 2,’’ but they put it on the back burner because it’s definitely easier to go for sequels.

Q. Is there a particular scene or setting in the movie that best captures Rio as you know it?

A. Blu hang gliding around the statue [Christ the Redeemer] is a sequence that was in my head from the get-go. Also, when I was a kid, I was always interested in nature and birds. I was very aware of issues in Brazil like bird smuggling and endangered species, and I wanted that to be a crucial part of the movie. There’s a [sad] moment where a street kid that helps “birdnap’’ Blu and Jewel walks into a room full of caged birds. I always wanted that image to play strong. And on the positive side, there are scenes that capture Carnival, which brings back childhood memories of street parties and going to the Carnival balls. I took some of the Blue Sky team to Rio a couple of years ago so they could experience that for the first time — like Blu, in a way. It’s one of those things that you have to do in your lifetime.

Q. A little closer to the office, your team also did research at the Bronx Zoo. Is that still a fairly traditional process — lots of animators sitting around zoo exhibits with their sketchpads?

A. Yeah, that’s something that I don’t think will ever change. Nothing better than the real thing to inspire you, and to let you know where you can take creative liberties.

Q. Like having a macaw perched on a hang glider?

A. You know, the hang gliding sequence is actually very accurate. It’s not very common that a hang glider just flies around the statue like that, but it happens. You have to get a special permit, though. So that was a bit of creative liberty.

Q. You’ve worked with your share of quick-witted performers — Denis Leary, John Leguizamo, Robin Williams on “Robots.’’ How did Jesse Eisenberg and the “Rio’’ cast rate?

A. With Jesse it’s not so much about ad-libbing whole lines, but about the pauses and the little reactions. We’ve also got Jemaine Clement from “Flight of the Conchords’’ as the villain [a cockatoo named Nigel], and talk about ad-lib heaven. His song is really funny. [Sample lyric, delivered in a Kiwi-inflected samba-rap: “I’m evil/I’ll fill your cheese balls with weevils/I poop on people and I blame it on seagulls.’’] And will.i.am was a big surprise. He’d come in and read the lines, but then just go on rapping and doing funny things. There’s a moment where he does this great riff imitating Anne Hathaway.

Q. Sounds like she had some fun of her own with this.

A. Anne’s so energetic. There’s a scene where Blu and Jewel have to escape smugglers by running chained together through the favela of Rio, the slums, and Anne did all of that stuff barefoot, running around the room. She was exhausted at the end.

Q. You gave one of your kids some voice work playing Blu’s owner as a little girl in the prologue. So is that the coolest part of the movie for her?

A. No, she’s happy to hear herself, and it’s fun to have my kids do a little of that, because I don’t get to spend a lot of time with them during production. But what the kids really like is meeting the stars. It’s like, “Forget Dad — let’s go hang out with will.i.am!’’

Q. Was it clear from the outset that music would be such a big element of the movie?

A. Well, it’s hard to think about Brazil without thinking about its music. If there’s one thing that’s most recognizable about the country, that’s probably it. So we got Sergio Mendes as our music guru on this. He’s been around making music for 50 years, but he’s got such a contemporary sensibility. He was the catalyst for bringing in everybody from will.i.am to Carlinhos Brown, a Brazilian percussionist.

Q. Blue Sky’s latest “Ice Age’’ short, “Scrat’s Continental Crack-Up,’’ plays at the start of “Rio.’’ Is there another “Ice Age’’ on the way? Other projects?

A. “Ice Age: Continental Drift’’ comes out next year. I’m not directing that one, but everybody from the “Rio’’ team has already crossed over to that. And Chris Wedge is doing another project called “Leaf Men’’ [from the book by William Joyce].

Q. We’re seeing quite a run of animation from a bunch of different studios, including “Rango,’’ “Mars Needs Moms,’’ and the new “Kung Fu Panda’’ and “Cars’’ movies. Is there a greater spirit of coexistence in the animation business these days? Several years back, you had Fox making its animation debut with “Anastasia,’’ and territorially re-releasing “The Little Mermaid’’ at the same time.

A. I think there’s an overall commitment to try to make good projects, and that studios do try to set up their slates so that everybody can get their run for their movies. Some years that seems impossible, there are so many things happening, but in general there’s room for everybody. We root for other projects. It’s good that we keep the animation niche strong — not just for all of us, but for kids, too.

Interview was condensed and edited. Tom Russo can be reached at trusso2222@gmail.com.