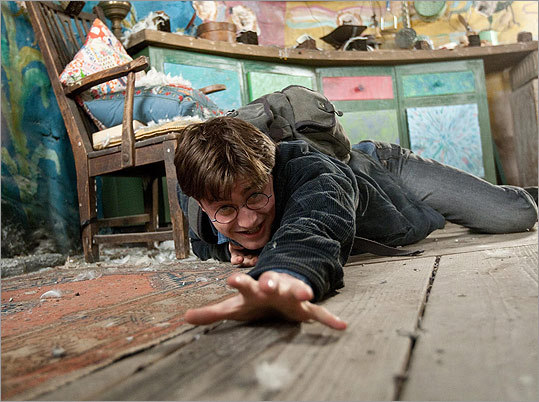 That sinister black magic! That spectral, racy clinch between Harry and Hermione! Those death and disfigurement scenes! Daniel Radcliffe in Victoria’s Secret lace! There’s a fair amount about “Harry Potter and the Deathly Hallows Part 1’’ (2010) that isn’t really for the grade-school crowd, but that’s hardly a news flash. Give the movie (and the Blu-ray extras) credit for not talking down to a young audience in documenting Harry’s brooding search for Voldemort-foiling artifacts. The disc features pop-up visual commentary that adds 20 minutes to the movie, along with another 20 minutes of branching featurettes. Kids probably won’t care about Malfoy Manor’s visual roots in Charles Foster Kane’s gothic sanctum, but they might get a kick out of looking behind the scenes at Ralph Fiennes getting a digital nose job as Voldemort. (Design and location snippets also might help revive UK tourism; you’ll see that all those remote, craggy, color-desaturated British landscapes required a lot of digital tweaking to appear that starkly uninviting.) The film regularly breaks to show refresher clips from the rest of the series, which many adults will welcome — as will young viewers/readers, albeit in a greatest-hits way, since you know they’ve got the entire, sprawling story line memorized. A special featurette shows how Radcliffe pulled off the trick of playing seven Harrys at once. And for the kid in all of us who just can’t wait for July’s “Part 2,’’ there’s a sneak peek at the first scene. (Warner, $28.98; Blu-ray, $35.99)

THE CHRONICLES OF NARNIA: THE VOYAGE OF THE DAWN TREADER (2010)

C.S. Lewis’s Lucy and Edmund Pevensie (Georgie Henley and Skandar Keynes) are back, taking to the high seas for a rescue mission with Prince Caspian (Ben Barnes) and their peevish cousin (Will Poulter, “Son of Rambow’’). The territory is a little familiar after the first two installments, but the change of scenery, complete with arthropod sea serpent and translucent merfolk, helps maintain interest. “Pirates of the Caribbean’’ may still rule the marketing waters, but “Dawn Treader’’ really does have the kids in mind. Extras: Production featurettes; games; on Blu-ray, animated tie-in short. (Fox, $20.98; Blu-ray, $24.99; available now)

Disclosure time: I might have judged Disney’s “Rapunzel’’ riff a tad quickly when it first hit shelves a couple of weeks ago. It felt like the movie had focused so completely on its much-publicized bid to boost the adventure — and broaden its demographic — that it neglected the princess element. But my own kids, both boys, have responded to Mandy Moore’s charm with the sort of repeat-viewing requests that always indicate a household hit. The emotional-roller-coaster bit that Moore delivers after Rapunzel finally leaves her tower certainly is appealingly quirky. It’s like the Ariel medley that wasn’t: “Part of Your World’’/“Um . . . or Not.’’ (, $29.99; Blu-ray, $39.99; available now)

Jack Black gets his silly on for Jonathan Swift the same way he does for “Kung Fu Panda’’ or “Yo Gabba Gabba!’’ or the Kids’ Choice Awards — not with socially satirical sophistication, but with loads of energy. Black’s skadooshed Lemuel Gulliver is a Manhattan mailroom slacker whose voyage to Lilliput makes room for an amusing foosball gag, Toho-style battle action, and an anti-war rock-out to Edwin Starr. Yes, you may have regrets about a pee-as-firebuster joke — again with the rewinding? — but remember, it’s there in Swift’s text, too. Extras: More goofing around in deleted scenes and featurettes. (Fox, $29.98; Blu-ray, $39.99; available April 19)

A super-cool-looking video game world and a time-tested story about a father (Jeff Bridges) and son (Garrett Hedlund) working to reconnect — a little something for everyone on family movie night. (Disney, $29.99; Blu-ray, $39.99; available now)

In a newly produced 45-minute segment, Linus gets grief over his continuing refusal to give up his old blue cotton crutch. Truer than most newer specials to that always-slightly-twisted “Peanuts’’ tone. Don’t miss Linus ranting about how all kids have insecurities — and then throwing Charlie Brown under the thematic bus. (Warner, $19.98; available now)

And speaking of kids who only seem to hear “Wah-wah-wah-wah-wah’’ when the adults in their life start talking. . . (Shout! Factory, $29.93; available now)

Iron Man, Captain America, Thor, and Hulk assemble as Marvel’s dream team: a possible indicator of how the live-action version might work when it hits theaters next year. (Disney, $19.99 each volume; available April 26)

Titles are in stores Tuesday unless specified. Tom Russo can be reached at trusso2222@gmail.com.