The Taylor model no longer can be read in the stars 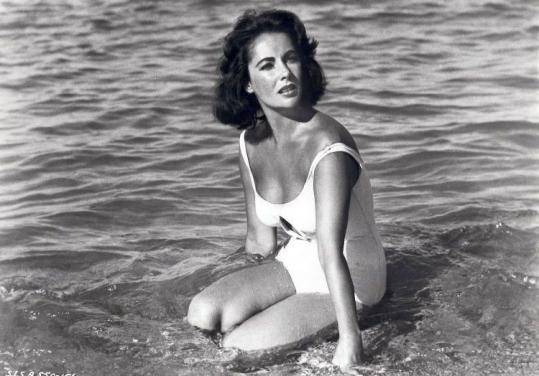 In 1987, Elizabeth Taylor released “Elizabeth Takes Off: On Weight Gain, Weight Loss, Self-Image and Self-Esteem,’’ a kind of how-to book about dieting. It’s unclear and perhaps unfair to judge from her subsequent public appearances — at the Oscars in 1993 and AMFAR galas, in the dusky glamour of her White Diamond perfume ads — whether she liked the results. But the book is inadvertently instructive nonetheless: She never released a volume on attaining and keeping movie stardom. There’s no reliable how-to for that.

The “self-image’’ and “self-esteem’’ aspects of the diet book were crucial to its author’s success. Taylor, who died last month at 79, demanded pride of ownership. She understood the power of the way she looked. Audiences, in turn, got a charge from that power. Taylor’s death allowed us to put a frame around her fame — as, say, the first celebrity and the last movie star. If she truly was the last movie star, one wonders how that could be. To get close to an answer, you would have to begin with the body. It was ample without ever being too much. In the hip, the bosom, the hair: More was more. Two curves were an hourglass. The arms carried a little flesh. The face seemed full — of mischief, desire, and strength. The idea of that body — the trouble it caused, the hearts it broke, the eyes it popped — died with Taylor, too.

It isn’t as though we look at Taylor now and wonder how she could have been famous. With all due respect, she wasn’t Shelley Winters, whose murder Taylor unwittingly seduced Montgomery Clift into committing in “A Place in the Sun.’’ Lots of women, lots of movie stars were built like Taylor, full-figured, untoned, and uninhibited, with Marilyn Monroe, Sophia Loren, and Gina Lollobrigida completing an unmatched Trinity of mid-20th-century bodaciousness. From France, in the 1960s, there were Brigitte Bardot and Catherine Deneuve.

Jane Russell died on the last day of February, meaning that, in less than a month, the movies lost two of its last legendarily heavenly bodies. In 1953, Russell and Monroe, the strapping brunette and the iconic blonde, left their footprints, handprints, and signatures alongside each other at Grauman’s Chinese Theatre. Russell and the Trinity embodied male sex fantasies while appearing to play shrewd roles in their own objectification. The gaze only made them stronger, which is what some exotic entertainers mention when talking about the thrill of their work. Taylor, of course, took a different approach: She made her body part of the drama. If we didn’t already know why Brick won’t give Maggie a baby in “Cat on a Hot Tin Roof,’’ that untouched negligee that clings to Taylor more or less outs him. Taylor wasn’t simply being with her body. She was acting with it.

But time has shown that the Taylor model has been unsustainable. It’s Audrey Hepburn’s physical slightness that has endured, as well as the vestal restraint it promoted. Just looking at what makes its way down the red carpet now, flesh has given way to bone, sin has given way to purity. Increasingly, we are no longer watching women at the movies. We’re watching weight. The goal of many careers now appears to be the promotion of fitness as a sort of talent.

The world’s biggest movie stars are long with a comic hint of voluptuousness — Angelina Jolie’s cloud lips, Gong Li’s incongruous bosom, Aishwarya Rai’s planetary eyes. Julia Roberts appears to have aged into a new exoticism. She looks fuller and happier than she ever has. She also makes fewer than one movie a year. Pedro Almodóvar successfully turned Penélope Cruz into a Loren-Lollobrigida sex bomb in “Volver.’’ It’s a body type that worked well for her later in the musical “Nine.’’ She was the only reason to see it.

Juliette Binoche consistently exemplifies the corporeal confidence of which Taylor was so full. Binoche uses the curves of her body in human terms rather than in pursuit of superhuman indestructibility. She is an aberrantly, glamorously real woman in a distressing universe of wraiths and action figures.

The transitional star from Taylor’s lavish, calculating sexuality to the sexless posing we have now is Jane Fonda. By the 1970s, she had shown women in serious modern roles, not just love stories. But in doing so, she killed some of the fun. She played a few of the same parts Taylor did — a hooker, a drunk, to name two — but she changed the nature of the sexuality from hot to cool. Her off-screen romantic life was an adventure, too, but she made it seem immaterial to her movie work and political activism. even though they were obviously connected. After the erotic space-camp of “Barbarella,’’ Fonda no longer wanted us to notice her body. She wanted us to connect with her mind. What followed in the 1980s was a kind of flagrant, viral misogyny in American movies that never quite subsided. (As if that weren’t enough, Fonda herself spawned a fitness craze with a series of videos.)

Of course, there was a moment at the end of the 1990s when the hourglass ideal seemed resurgent. Kate Winslet and Jennifer Lopez were newly famous and their brick-house bodies were much ogled and pursued. Sadly, the sand ran out. And rather than flip over the timer, we simply opted for a comically thinner model, like the plastic thing that comes in a box of Boggle. Neither Winslet nor Lopez did much to help change the perception. Winslet, perhaps scared off by the intergalactic success of “Titanic,’’ spent her career making professionally satisfying, Oscar-worthy, commercially microscopic films that made her a completely new, if reliably carnal woman in every film. She opted to act rather than scandalize.

Lopez, meanwhile, chose the latter over the former, overextending her talents until we wondered what they were in the first place. But perhaps more than any other star in the last 20 years, Lopez would have seemed to provide some semblance of Taylor’s style of fame. It’s all a blur now, but Lopez’s life was a paparazzo’s dream back then: divorces, marriages, a stint as P. Diddy’s moll, red carpet drapery. She had love affairs and courtroom dates. But she and the movies did very little to exploit the notoriety with larger-than-life bombast, with sexuality. At the height of her stardom, Elizabeth Taylor was Cleopatra. At the height of hers, Lopez was a maid in Manhattan.

Taylor never seemed to answer to anyone. What didn’t kill her only made her more famous. The limitation in mourning Taylor and considering her legacy is one peculiar to the movies. True stardom is a kind of natural resource. When it starts to dry up or mutate, we freak out. Can it be replenished? How? Where will we find our next great screen goddess? (If television producer Mark Burnett is reading this: Mark, I know what you’re thinking, and it’s a terrible idea.)

It’s not just our feelings about stardom that have changed in the last 50 years. It’s our idea of the body. One of the joys of watching AMC’s “Mad Men’’ is the arch pleasure it takes in the archetypal body of the 1960s woman. The camera doesn’t ogle the hourglasses and pear shapes. It seems to study them with a kind of documentary care, none more thoroughly than that of Christina Hendricks, who plays Joan Holloway, the head of the ad firm’s secretarial pool. It’s a cunning performance. In season two, she mourns Marilyn Monroe’s death, but in dealings around the office she appears to be a woman after Taylor’s heart. Because of a contract dispute, “Mad Men’’ won’t be back on the air until next year, so Hendricks has some down time. It’s unclear what else she can do. She hasn’t starred in any movies. But her glamour, her guile, her bodily command insist that someone let her try.