Trapped in a clash of cultures 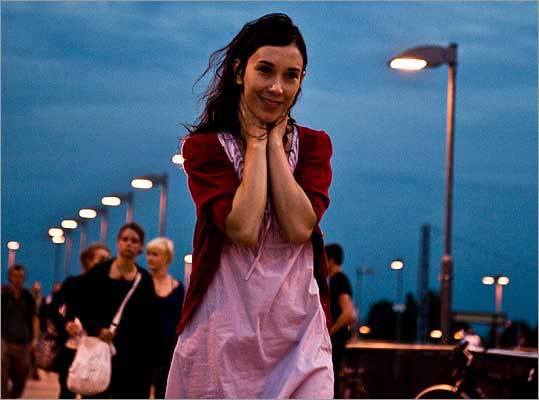 ‘When We Leave’’ is a powerhouse melodrama that feels didactic and manipulative even as it rips your heart out. A German-made film about a Turkish woman’s flight from an abusive husband and her attempts to start a new life in Berlin, it plunges us into a culture clash that pits women’s rights on one hand and honor killings on the other. The lead performance is just about perfect. So why do you come out feeling generically outraged rather than stoked with a righteousness that’s strong and true?

Sibel Kekilli, the galvanizing wild woman of 2004’s “Head-On,’’ plays Umay with the grace of a Modigliani saint and the stubbornness of a Joan Crawford heroine. When “When We Leave’’ opens, she’s getting an abortion because she can’t bear having another child with her sadistic brute of a spouse (Ufuk Bayraktar). Quietly leaving her in-laws’ Istanbul home one morning with her 5-year-old son, Cem (Nizam Schiller), Umay grabs a flight to Berlin and appears on her family’s doorstep, expecting that she’ll be welcomed back home.

Instead, her immigrant father Kader (Settar Tanriogen) and older brother Mehmet (Tamer Yigit) close ranks against her. The movie’s most compelling secondary drama lies with the heroine’s mother, Halyme (Derya Alabora), an intelligent, feeling woman immobilized by her community and traditions. “You want too much,’’ she scolds her daughter. “Better than too little,’’ Umay snaps back.

“When We Leave’’ dramatizes the plight of young, secular Muslim women who are raised in Western cities and then asked to become second-class citizens when they marry and return home. Feo Aladag, a German actress writing and directing her first feature, does her best to humanize the men, showing how trapped and hurt they are by their social strictures and by Umay’s flouting of them. For her part, Kekilli plays the lead with a headstrong stubbornness that stops short of giving the part any unflattering complexities. The actress holds the camera with a simple, unadorned beauty that lights up the movie and at times threatens to overwhelm it.

“When We Leave’’ rolls inexorably along to an ending that probably isn’t the tragedy you’re expecting but may actually be worse. Aladag stacks her deck with the adorable Cem — less a character than a plot function — and a shy, sensitive German boyfriend (Florian Lukas) for Umay, and you can tell the director is moved by every woman’s subjugation rather than this particular one. That makes for effective advocacy and less effective drama. As powerful as the movie is, it stays on the outside of a culture looking in.

Written and directed by: Feo Aladag

In Turkish and German, with subtitles