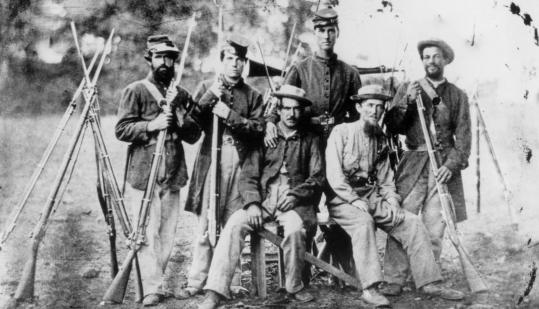 Ken Burns’s landmark documentary “The Civil War’’ was televised on five nights in 1990. One of many archival photos he used was this one of Confederate volunteers. The new DVD reissue includes interviews with Burns (pictured last fall in Boston), the late Shelby Foote, and others. (Library of Congress)
By Saul Austerlitz Globe Correspondent / March 27, 2011

One hundred fifty years ago next month, Confederate militiamen opened fire on Fort Sumter, in South Carolina, in the first battle of what was to become the Civil War. It was to be fought in 10,000 places, costing the lives of more Americans than any other war. The process of understanding what took place, of wrestling with its implications, has continued, unbroken, since that April 12, 1861 bombardment began.

Now, for the war’s sesquicentennial, PBS Home Video and Paramount have reissued Ken Burns’s epochal 1990 documentary, “The Civil War,’’ in a deluxe “150th-anniversary’’ package that includes new and previously unseen interviews with Burns, historian and novelist Shelby Foote (who died in 2005), and others. (The clumsy title gives rise to the image of an infinitely aged Burns, digital video camera in hand, filming the Battle of Bull Run.)

“Between 1861 and 1865, Americans made war on each other and killed each other in great numbers, if only to become the kind of country that could no longer conceive how that was possible,’’ the film observes at its outset. It proceeds from there, delving into the experience of the Civil War from a staggeringly varied array of perspectives: those of Abraham Lincoln, Robert E. Lee, Ulysses S. Grant, Frederick Douglass, Union soldier Elijah Hunt Rhodes, and Southern diarist Mary Chesnut, among many others.

Burns, 57, and with other mammoth documentary series on iconic American subjects such as “Baseball’’ and “Jazz’’ under his belt, still shudders when remembering the 5 1/2-year process of making “The Civil War.’’ “My previous films, I think we were keeping one or two balls in the air,’’ he says. “This one was keeping 40 or 50 balls in the air at once, in terms of all the narrative strands that we had to tie together. That’s what made it so terrifyingly difficult to do.’’

For Burns, the war had beckoned as a recurring subject in all of his earlier films, summoning him to take it on. “The Civil War was the defining event circling around all the other films I’d made,’’ says Burns. “It’s the most important event in American history, and I’m a filmmaker making films in American history. Gradually you’ve got to feel, correctly or not, that you’ve got to tackle it, or try to tackle it, and hope you have the chops to do it.’’

Burns sought to tell the story of the Civil War in large part to counteract some of the grotesquely distorted versions that had previously appeared onscreen. “ ‘Birth of a Nation’ and ‘Gone With the Wind’ essentially think that a terrorist group are the real heroes here,’’ Burns said. “We felt there was a different story that needed to be told, that didn’t have African-Americans as passive bystanders, but active, dedicated, self-sacrificing soldiers in this intensely personal drama of self-liberation.’’

“The Civil War’’ succeeds in large part because of the lyrical pithiness of its narration, written by Burns, his brother, Ric, and Geoffrey C. Ward, and read by historian David McCullough (“John Adams’’). Its brevity, notable for such pronouncements as the memorable quote from Virginian Wilmer McLean, who remarked that “the war began in my front yard and ended in my front parlor,’’ masks a surprisingly deep erudition. The topic being far too large to ever entirely master, Burns leaned instead on the parts that might adequately represent the enormous whole. “It’s impossible to understand or represent the whole thing, and so you look for symbolic and signal events,’’ he says.

Burns drank deeply of the available Civil War scholarship, drawing on the intellectual resources of nearly 25 scholars of the war, ranging from Marxists to Lost Cause apologists. The research process never stopped, leading to some frantic final moments. “The last day of editing we actually added something we learned, new information, we added a photograph,’’ remembers Burns. “It drove the editors crazy.’’

The addition of Rhodes, whose plain-spoken diary entries from the Union front lines are among the most moving in the film, was an example of the fortuitous accidents that went into the making of Burns’s masterpiece. “I happen to live in a little village in New Hampshire, and one of my fellow townsmen was the great-grandson of Elijah Hunt Rhodes. He had sort of piled together, in a vanity publication, his ancestor’s diary. And I just went, ‘Oh my God!’ ’’

Although a dazzling multiplicity of perspectives informed “The Civil War,’’ only a handful of scholarly voices are heard in the film itself — chief among them the gentlemanly Foote, who provides a knowing take on the Southern military effort. “One of the previous films I’d made, on Huey Long, was an hour-and-a-half film that had about 35 different talking heads,’’ says Burns. “And I thought, jeez, ‘The Civil War’ was originally going to be five hours, and expanded to 11. We’d have hundreds! And what turned out is very few people were able to make it come alive, and that’s what we were looking for.’’

“The Civil War’’ made Foote a star of sorts, and the reissued DVD set includes outtakes from Burns’s interviews, which give a deeper sense of him as a patient, probing interviewer, and Foote as both a charming storyteller and something of a Southern apologist, arguing that slavery was more a propaganda item than a prime mover of the war.

“The Civil War’’ made an enormous splash upon its first broadcast on PBS, and Burns suggests in the DVD commentary that its success stemmed less from the film itself than from the war’s centrality to the narrative of American history: “We touched a nerve.’’ His modesty aside, “The Civil War’’ has earned its place in the pantheon of American documentary filmmaking by virtue of its rigor, its honesty, and its clarity. Above all, Burns was able to wring a kind of fair-mindedness out of a subject still able to inflame Americans whose great-grandfathers were not yet born when the war was ended. All of this while never losing sight of the horrors of slavery. As Burns notes of his film, “We were mindful of the fact that these were human beings on both sides.’’