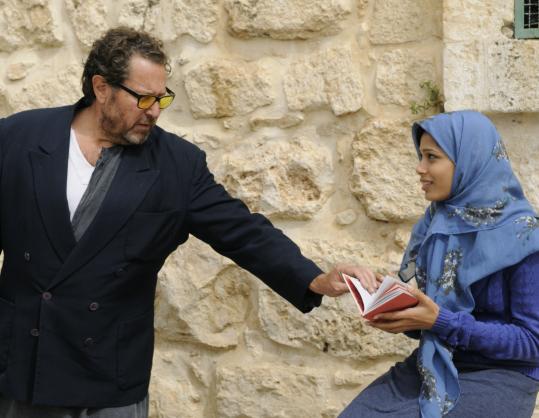 Julian Schnabel directs Freida Pinto in a scene from “Miral,’’ in which Pinto plays a Palestinian caught up in the strife with Israel. (Jose Haro/The Weinstein Company)
By Sebastian Smee Globe Staff / March 27, 2011

Julian Schnabel achieved fame — and great wealth — as a painter in the 1980s. His first feature film, “Basquiat’’ (1996), was an homage to his late friend, the painter Jean-Michel Basquiat. It starred Jeffrey Wright in the title role, along with Benicio Del Toro, Gary Oldman, Dennis Hopper, and David Bowie as Andy Warhol. His next two films, “Before Night Falls’’ (2000) and “The Diving Bell and the Butterfly’’ (2007), saw a more personal vision emerge. His latest, “Miral,’’ has stirred up controversy because it describes the Israeli-Palestinian conflict from a Palestinian point of view.

Q. The film is based on a book by Rula Jebreal, who is your girlfriend. How did you meet?

Q. She had written an autobiographical novel based on her experiences coming of age in East Jerusalem. How did you come to make a movie based on it?

A. She had never had a book turned into a movie before. She had someone working on a script, and she showed it to me. I didn’t like it at all. I told her she should do it herself, and that I’d help her. We began location scouting in June of 2008 and preproduction a year later. And now it’s opening.

Q. I liked the look of the film. It felt very intimate, with lots of close-in movement. Like your other movies, it felt intensely personal. Is that what you were trying to achieve?

A. Absolutely. You know, some people wonder whether you can make a 3-D movie without all the special effects. I say, “Sure, you just move the camera around.’’ My whole approach, to be honest, is intuitive. When I make a movie, I don’t have a storyboard. I work spontaneously wherever possible. It keeps things fresh for me, and for the actors. It’s important for them to have fresh situations to react to. You have to let them work off the locations.

Q. The film has already been controversial. The American Jewish Committee says it has “a clear political message, which portrays Israel in a highly negative light.’’ If someone came from another planet and asked you to explain the controversy, what would you say?

A. I would say it’s based on people being scared, and losing their place. On the one hand, you have people who are disrespected and displaced. And on the other you have people who have been disrespected and displaced. Unfortunately, having that happen hasn’t made all these people more sensitive to one another. But you can’t generalize. There are conflicts going on within Palestinian society and conflicts going on within Israeli society. And everywhere there are many people who desperately want to make peace. One of the sad things is that civil society has been a hostage to politicians on both sides. And, of course, they’ve also been the recipients of decisions made by other countries — England, for instance — when all these borders were established. The point is, the movie is not an inexhaustible and omniscient story of the Israeli-Palestinian conflict. It’s the story of one girl and her family. People who say the film isn’t balanced have to understand: It’s not one-sided; it’s from the point of view of one side. There’s a difference. The whole notion is to understand one another. If you want to do that, you have to see things from the point of view of the other side.

Q. You’ve described yourself as a child of Zionists.

A. Well, I’m just from a background where we wanted Israel to succeed. I think anyone who wants that really qualifies as a Zionist. Some people have obviously felt that the film is anti-Israel. But when an American criticizes something about his government’s policy, he’s not accused of being anti-American. And in the same way, when a Jew criticizes Israel’s policies it doesn’t mean he’s anti-Israel. It means he cares.

Q. There’s a moment in the film where Miral’s father says, “Seeing you does my heart good.’’ That struck me. The whole film is very beautiful. So is the star, Freida Pinto. So I wondered, do you ever think about beauty in relation to politics? Do they have anything to do with each other? Can beauty, for instance, act as an antidote to political strife?

A. Did you ever see the film — by Jean Cocteau, I think — in which someone says that beautiful people have special rules that are just for them? [“People who are very beautiful make their own laws’’ — Vivien Leigh in José Quintero’s “The Roman Spring of Mrs. Stone.’’] I mean, have you seen what Rula looks like?

Q. Yes, I was going to say, she also looks very beautiful.

A. Well, my point is just how close she looks to Freida. I wanted to get an actress who looks like Rula. Freida looks like she does, but she can act. She carries the film. She wouldn’t have got where she is without being a great actress. Yes, she’s beautiful. Will more people see the movie because she’s in it? I would hope that that’s a good thing. That’s the way the Hollywood system has traditionally worked, and I suppose it’s why actors are paid so much.

Q. How does Rula feel about her homeland these days? Is she hopeful? And what about you?

A. I think she is hopeful, yes, and I am, too. There are good people on both sides of this conflict. And reasonable people. Israelis and Palestinians both helped me to make this film, and I’m so grateful to them all. And if you look at the credits, it looks like Daniel Barenboim’s [mixed Arab-Israeli youth] orchestra. Also, if you look at what’s happening in the region, people don’t want dictators, and restrictions, and controls. They want freedoms and rights, dignity. They’re pro, not against. They’re for human rights.

Q. You first achieved fame as a painter. Are you still devoted to your art-making?

A. Oh, yes. In fact I have a show coming up at the Museo Correr in Venice during this year’s Biennale. I don’t want to make movies for a while — I want to get back to painting.

Interview was condensed and edited. Sebastian Smee can be reached at ssmee@globe.com.