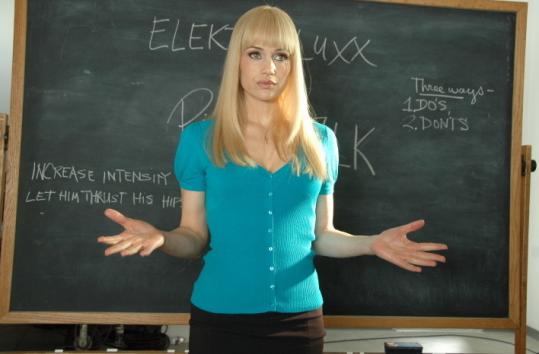 It would be nice to report that Sebastian Gutierrez agrees with me. But “Elektra Luxx,’’ his comedy about an ex-porn star, two vacationing adult-movie actresses, and an uptight sex blogger does a lot of winking and teasing. When a woman famous, in part, for playing a major role in “Boogie Nights ’’ appears here as a fully clothed Virgin Mary, the movie is telling both a joke and the sad truth: Adult-movie movies want redemption.

This one is a sequel to 2009’s “Women in Trouble,’’ which Gutierrez made in an enjoyable state of high, sub-Almodóvar anxiety. The new movie is a lesser concoction with many of the same characters and actors but without the manic fizz. It’s just a mess in three overlapping parts. Elektra (Carla Gugino, in a blond wig) finds herself mixed up with a flight attendant named Cora (Marley Shelton), who gave Elektra’s late ex his final erotic thrill. Joseph Gordon-Levitt plays a blogger who shoots his streaming videos in his mother’s basement. And two of Elektra’s peers — played by Adrianne Palicki and Emmanuelle Chriqui — go to Mexico.

Otherwise, Gutierrez deserves credit for giving Kathleen Quinlan something funny to do (she plays a writer in Elektra’s porn-for-amateurs class) and treating us to the happily unpredictable comic stylings of Lucy Punch. But this is a safe, borderline-nonsense movie that calls for a surprising performer at its center. Gugino is tough and carnal. But most of her sexiness stems from that aforementioned business of leaving the bodily details to the imagination. She seems too wily and a bit too dignified for a movie like “There Will Be Head’’ (she’s also Gutierrez’s girlfriend, so there’s that, too). “Elektra Luxx’’ needs a star whose secret weapon is that she only looks and sounds as dumb as people think she is. It needs Melanie Griffith.

Gutierrez has also had a hand in schlock (“Gothika,’’ “Snakes on a Plane,’’ and “Rise: Blood Hunter’’) and some of that trashiness shows up here but not often. As a director, he’s slightly craftier. Throughout “Elektra Luxx,’’ Gutierrez flirts with humor and film noir in blips of inspiration. There’s a good sequence, for instance, in which Elektra passes a stranger (Timothy Olyphant) in a stairwell and openly fights the urge to follow him up and knock on his door. This appears to be an occupational hazard: A porn scenario might erupt anywhere with her. Of course, the joke has an extra ply or two since the fantastical knock in most adult movies tends to be done by a man.

Down in Mexico, we discover that Palicki and Chriqui are a good team for laughs. Palicki is slow and literal; her character is in love with Chriqui’s, who is sleeker, quicker, and smarter. Somewhere in both those story lines resides an actual movie. Today Guiterriez releases another new film titled “Girl Walks Into a Bar’’ exclusively on YouTube. Maybe some of that movie’s in here.

Written and directed by: Sebastian Gutierrez