Adjusting sci-fi stories for the screen 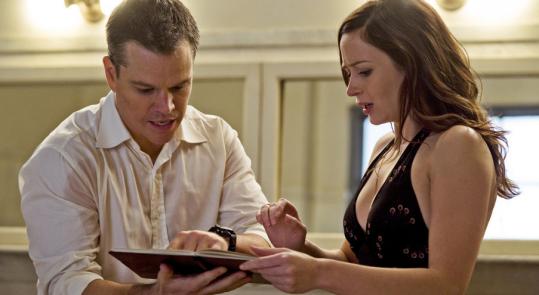 Some writers — James Joyce, say, or Thomas Bernhard — do not seem to readily lend themselves to cinematic adaptation, while the works of others, such as Jane Austen or Dan Brown, practically cry out to be seen on the big screen. And sometimes writers, in a strange pattern of reverse osmosis, find themselves discovered by ever-wider audiences as a result of their cinematic second lives.

No one exemplifies this more than Philip K. Dick (1928-82), the once-obscure science fiction novelist recently granted the rare honor of a Library of America edition devoted to his writings. Dick’s body of work, which includes the novels “The Man in the High Castle,’’ “The Three Stigmata of Palmer Eldritch,’’ and “Valis,’’ stands on its own merits, notable for its bleak humor and fizzing, burbling paranoia. If that were not enough, a cavalcade of Dick film adaptations, beginning with 1982’s classic “Blade Runner’’ and continuing through the new film “The Adjustment Bureau,’’ directed by George Nolfi and starring Matt Damon and Emily Blunt, have drawn waves of attention to Dick for almost three decades now.

Reading Dick’s writings offers a surprisingly consistent experience; watching adaptations of those writings, not so much. For every “Blade Runner’’ emerging from Dick’s work, there seem to be a fistful of duds such as “Screamers’’ (1995) and “Next’’ (2007), which echo Dick only insomuch as they are records of a nightmare world in which films like these provide the only entertainment.

Dick has often been treated as a jumping-off point for filmmakers — a supplier of atmosphere and little else. The movies adapted from Dick’s novels and short stories frequently indicate more about the filmmakers than the presumptive source material. The bril liant “Blade Runner,’’ adapted from Dick’s novel “Do Androids Dream of Electric Sheep?’’ is true to Dick’s scenario while finding its own brand of melancholy futuristic anomie occasionally at odds with its source material. The most memorable special effect of “Blade Runner’’ is its sharply rendered portrait of dystopian Los Angeles, which launched a thousand inferior science fiction films. Directed by Ridley Scott, “Blade Runner’’ is far and away the best film to emerge from Dick’s oeuvre without necessarily being the best Dick adaptation.

A monster hit in its day, “Total Recall’’ (1990) is now better remembered for offering journalists an endless series of crafty puns when its star, Arnold Schwarzenegger, was elected governor of California in a recall election in 2003. Based on his short story “We Can Remember It for You Wholesale,’’ “Recall’’ clumsily melds Dick’s metaphysical themes (“If I’m not me, then who the hell am I?’’) with director Paul Verhoeven’s two-fisted action sequences. By 2011 standards, the film’s special effects are nearly prehistoric, but “Total Recall,’’ made with Verhoeven’s signature verve, does preserve Dick’s warped sense of humor: The film’s most memorable image is the brief flash of a three-breasted woman. The future is an odd and beguiling place.

Steven Spielberg’s 2002 film “Minority Report’’ was the harbinger of the second wave of Dick adaptations. Imagining a world where criminals are caught before they commit their crimes, Spielberg deftly balances Dick’s taste for grimy grotesquerie (star Tom Cruise, temporarily blinded, eats a moldy sandwich and drinks spoiled milk) with his own trademark silvery sheen. Cruise is a detective on the run, accused by his own systems of planning a murder he knows he has no intention of committing. “Minority’’ is a sci-fi whodunit structured as a series of charged encounters, with Cruise surrounded by a colorful supporting cast of characters that includes Samantha Morton, Max von Sydow, and Tim Blake Nelson. Its biggest nightmare, though, is its depiction of an individually tailored consumerist future: Cruise is terrorized by ads calling out his name as he attempts to surreptitiously make his way through a mall.

Action-film master John Woo (“Face/Off’’) seemed like an ideal fit for Dick, but “Paycheck’’ (2003) is a botch from start to finish. Ben Affleck, his face frozen in a constipated gaze, is a slick engineer who gives up years of his life in exchange for a fabulous windfall, only to find himself unexpectedly fleeing for his life. “Paycheck’’ features the shady corporations and technological wizardry that are a regular feature of Dick’s work, but Woo prefers his familiar gunplay to any more nuanced exploration of Dick’s critique of corporate influence. And the less said the better about poor Uma Thurman, thrust into wildly unflattering clothing and stuck with all the film’s worst lines.

Few might have suspected that the director of “Before Sunrise’’ would be the ideal Dick adapter, but Richard Linklater’s “A Scanner Darkly’’ (2006) makes use of the rotoscope technology of his earlier gem, “Waking Life,’’ to notably mind-bending effect. “Scanner’’ “stars’’ Keanu Reeves, Robert Downey Jr., and Winona Ryder, or animated versions of the same, with drawings matching the outlines and movements of the actors themselves. The plot concerns a cabal of junkies who may or may not be addicted to a mysterious compound known as Substance D, and the film throbs and pulsates as if it, too, had Substance D shooting through its veins. Madly changing tones, “Scanner’’ never allows us to secure ourselves in relation to the film: Are we inside the madness, or safely outside?

“A Scanner Darkly’’ is the most Dick-esque (Dick-ensian?) of the movie adaptations to date, its buzzing, jesting sensibility the ideal cinematic analog for Dick’s warped, perversely comic dream worlds. “The Adjustment Bureau’’ offers a more traditional take on Dick, but it doubtless will not be the last time the science fiction master takes to the screen. Long may he warp our minds.