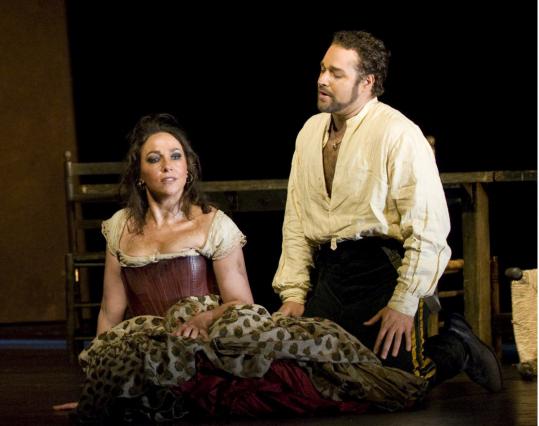 Ironically, 3-D has rarely seemed as gimmicky as in “Carmen in 3D,’’ a filming of George Bizet’s 1875 warhorse as staged in 2010 last year at London’s Royal Opera House. Not that they’re throwing spears or tenors at the screen; on the contrary, the film, directed by Julian Napier, faithfully captures the painterly realism of Francesca Zambello’s production, originally mounted in 2006. The crowd scenes especially are busy tableaux of Gypsies and Spaniards, flat scrims reminiscent of Velasquez or the 19th-century Impressionists that the third dimension only turns into pages from a lavish pop-up book.

When 3-D really works, it can add an entirely new dimension of dramatic space, and you get that in a few moments here, in some of the duets and toward the end, when Don Jose (Bryan Hymel) stalks his ex-lover Carmen (Christine Rice) across all points of the stage. But most of “Carmen in 3D’’ uses RealD technology without using it well, and the high-contrast lighting emphasizes one of 3-D’s biggest flaws — the way reflective surfaces, like the shine of a guard’s patent leather hat or even the extras’ hair, play havoc with the polarized filters in your plastic glasses.

Oddly enough, the live 2-D opera broadcasts that movie theaters have been programming in the last few years have much more presence. With “Carmen in 3D,’’ that there-ness is thrust in your face, and more often than not it’s a distraction, even if you’re not getting double images from a miscalibrated projector, as happened in the first of two screenings I attended. (The revolution may be here but they’re still working the bugs out of the system.)

As opera, the movie probably won’t convert newcomers, but fans will get a charge from Rice’s lusty, low-down playing of the title character, and Hymel turns Don Jose into an acceptably brooding romantic chump. The finest performance, so far as these inexpert eyes and ears can tell, comes from Maija Kovalevska as the virginal Micaëla, whose third-act aria is intensely moving even if you’re not reading the dark gray subtitles along the bottom of the screen.

Even with established crowd-pleasers like the “Toreador Song’’ (enter bullfighter Escamillo, as played by Aris Argiris, on a scene-stealing horse), it’s a long night to spend fiddling with your 3-D specs: 170 minutes, including a 20-minute intermission. Still, when it’s done well, as it seems to be here, “Carmen’’ is as full-blooded and over-the-top a celebration of passion, stalking, and spurned-lover homicide as you’ll ever see. No, it’s not very politically correct, nor has it ever been, but a good production can kick like a mule. How ironic that a technology that promises to make the experience more “real’’ than ever only serves to muffle its hooves.