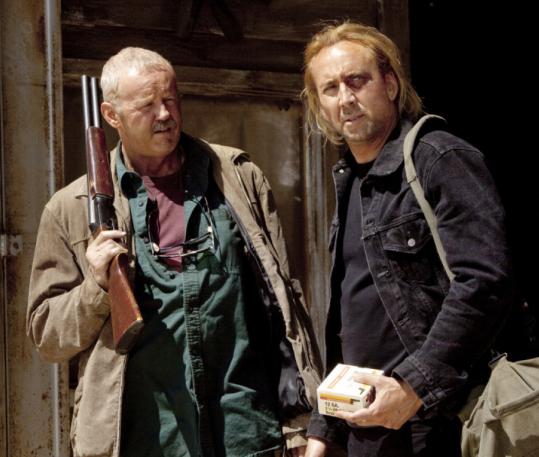 It must be handed to Nicolas Cage. He continues to boldly go where few actors willingly do: the dumpster. His career now is almost completely reverse-engineered. Some actors aspire to emulate Brando and Hoffman. Cage wants to top Michael Dudikoff and Jeff Fahey. Even by the substandard precedent set by his usual landfill contributions, “Drive Angry’’ is something new for Cage — a movie that feels like it’s straight from cable.

You laugh at the news that he plays a character called John Milton and that Milton is an escapee from hell who wears a leather jacket and wispy blond hair and wants to stop a cult leader from sacrificing his infant granddaughter (yes, Ghost Rider can be a grandpa). As urgent as that sounds, it doesn’t do much to prevent him from, say, conducting a motel-room shootout with a naked woman screaming in his lap (“I never disrobe before gunplay’’) and a giant cigar in his mouth.

This is the rare major release that permits — in swampy, criminally expensive 3-D! — the study of how some effects are too cruddy to achieve specialness, how not all stuntpeople, dancing extras, and men playing State Trooper Number Three are created equal. You can also truly appreciate how not every burning car that’s piloted over a camp of dancing cultists is awesome, which goes double for fake breasts. This is a movie that began at the bottom of the barrel and saw no reason to climb out.

But there is William Fichtner, who plows along as an agent of death. He looks hale and self-amused in a decent suit, his skin as tight as a pair of Spanx. David Morse and the horror veteran Tom Atkins show up here and there. And Billy Burke, better known as Bella’s dad in the “Twilight’’ saga, plays the bayou cult leader.

Amber Heard, a pert Texan, rides shotgun with Cage. She wears the requisite Daisy Duke shorts and a white tank top that refuses to stain and seems only to tighten around her chest as the minutes drain away. She’s the bridge between Scarlett Johansson and Kristen Stewart, but I wouldn’t feel safe crossing it.

It’s unclear whether Cage’s ongoing attraction to this sort of film represents a kind of bizarro megalomania: There’s no one worse than me! But the trouble with “Drive Angry’’ is that his sheen of cool has now worn thin. Indeed, he handles much of the movie’s killing and brooding using the last weapon we expect to experience under these circumstances: his professionalism. Eww.