Left off the list? Oscar snubs are no laughing matter 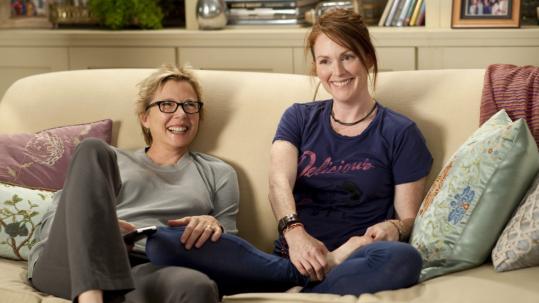 From left: Annette Bening (nominated) and Julianne Moore (not) in “The Kids Are All Right.’’ (Suzanne Tenner/Focus Features)
By Wesley Morris Globe Staff / February 20, 2011

Annette Bening has won wide and just plaudits for her work as an uptight doctor in “The Kids Are All Right.’’ The odds are decent for her to win her first Oscar next Sunday on her fourth try. Playing a flaky, flustered, philandering liberal, Bening’s costar, Julianne Moore, was just as good but was not nominated. She, too, has been nominated a bunch without a win (four times). It’s true that sentiment isn’t on Moore’s side the way it is for Bening, who owns two losses to Hilary Swank. But what worked against Moore?

Tone, I think. Moore is breathless and antic and wildly physical in “The Kids Are All Right.’’ She’s in a screwball comedy. Bening is in a soap opera (although what she does is much shrewder than anything you’ve ever seen on a soap). Moore is having all the fun that Bening can’t. (Oddly, the man with whom she’s having the fun, Mark Ruffalo, is a supporting actor nominee, adding another grain of salt to her wound.)

Moore, of course, is the sort of professional who would be pleased just that a movie she worked on was so enthusiastically received. But her omission — in favor of five longer-faced performances — raises an ongoing question about our understanding of acting and the stamp that Academy Awards place on that understanding: Is a great performance an unhappy one? Are we wary of consistently lauding acting that amuses? In “Goodfellas,’’ Joe Pesci sort of addressed that matter when he berated a guy who found him funny. He won an Oscar.

At 83, Oscar is old, and the more senior he gets the more he appears to lose his sense of humor. Of the 20 slots for actors, none is filled by a completely comedic performance. It’s true that part of what makes Jesse Eisenberg, Jeff Bridges, Melissa Leo, Geoffrey Rush, Christian Bale, and Jeremy Renner so good in their respective movies is their skill at using humor to upend the surrounding gravity. Bridges, Leo, and Rush excel at this, gluttonously, shamelessly using everything they have to get everything from us. But this year their hammy comedy is in the service of the suffering and death around them.

“The Fighter’’ and “Toy Story 3’’ are semi-comedies, movies that are funny but not so much so that they lose sight of emotional aspirations higher than laughter — which, of course, from the standpoint of the awards season, is the trouble with comedy: It’s a lesser art form. At least that’s how it’s treated, like a genre we want to sleep with but would never marry.

In the last three decades, the Academy’s various omissions have inspired bouts of dread. Whither women directors, box-office hits, foreign-language films, Steven Spielberg, the young, the openly gay, the American-born, black people? With the Oscars, comedy has always been something of a joke. Since 1976, 190 movies have been nominated for best picture. Fewer than 30 are comedies.

The last lead performances to win for pure comedy were Cher in “Moonstruck’’ (1988), Frances McDormand for “Fargo’’ (1997), and Helen Hunt for “As Good As It Gets’’ (1998). Comedic work often does better in the supporting categories: Dianne Wiest, for instance, was nominated three times and won twice. In 1989, Geena Davis, Joan Cusack, and Sigourney Weaver were all nominated (Davis won).

That same year Kevin Kline won his only Oscar for the idiot-bully he played in “A Fish Called Wanda.’’ Marisa Tomei, Mira Sorvino, Alan Arkin, and Christoph Waltz also won for comedic performances. It never became a habit. Since 1976, only Diane Keaton, Tom Hanks, Cusack, Wiest, and Renée Zellweger (“Cold Mountain’’ was not funny, but she was) have been nominated more than once for comedic work. And some of the best comedic acting of the last 25 years — Steve Martin in “Roxanne,’’ Susan Sarandon in “Bull Durham,’’ Reese Witherspoon in “Election,’’ Johnny Depp in “Ed Wood,’’ Laura Dern in “Citizen Ruth,’’ Mark Wahlberg in “I Heart Huckabees’’ — was ignored by the Academy.

There are comedians in its ranks. But given the number of them who have “gone serious,’’ the conventional wisdom appears to be that dramatic acting confers a more gratifying credibility. In 35 years, the only comedian to win for being funny has been Whoopi Goldberg. Robin Williams, Jamie Foxx, and Mo’Nique won for trading the mask of comedy for its more serious opposite. Of course, the Academy can’t omit what doesn’t exist; and to be fair, the state of American film comedy has been rather dismal. Most of what’s funny from Hollywood and New York now is on TV or animated.

Still, another egregious snub this year is Matt Damon in “True Grit.’’ Like Moore, two of his costars are nominated while he is not. Deploying a trick Texas accent and ace timing to keep up with Jeff Bridges, Damon is a riot. In at least one scene, a shooting contest, he upstages Bridges. Hairy, bucktoothed, and something of a rube, he is effortlessly funny. It’s possible, however, that Oscar voters thought Damon was just funny-looking. It wouldn’t be the first time. They passed him over last year after he put on weight, a fake nose, and a toupee to play a pathological liar in “The Informant.’’

Instead, they nominated him in the supporting category for a solid but comparatively dull performance as a South African rugby player in “Invictus.’’ He and Moore make comedy look easy (the road to the concession stand is paved with proof of the opposite). Yet, apparently, when we look for obviously great acting, we want the work to show. We need to see suffering or pain or tragedy. Maybe Damon and Moore should have learned ballet while coming down with a stutter.

The closest Oscar wants to get to comedy is the host of the telecast. Of course, it just hired two actors to emcee. Which means if Sarah Silverman wants to get near this show, she’ll have to play Cordelia — or King Lear.

Even a moviegoer who doesn’t buy into the rapturous fan hype surrounding “Inception’’ — who suspects that the central concept of dream-explorers is both overly literalized here and comic-book shallow — has to maintain a certain awe for the way Nolan brings that concept to cinematic life. On the level of craft rendered in the service of a heady idea, the movie is startlingly rich and painstakingly thought out, from the city grid that folds over like origami to the shifting tectonic plates of dreaming narrative to a cast cannily chosen to suggest both a heist gang and a movie crew. “Inception’’ is complete filmmaking, and the Academy was absurdly remiss to not nominate it. TY BURR

Man walks into a canyon crevice. Man’s arm gets trapped in crevice by falling rock. Man cuts off arm with dull pocket knife. Name another director who could make this narrow, nauseating episode into a watchable movie, let alone a stylish, engrossing Oscar contender. Boyle’s latest is a best picture nominee because of his impressive sense of how to make small stories big and big stories riveting. His viewers feel each exaggerated pulse of life, near death, and spiritual awakening. Only David Fincher, who managed to make code-writing a spectator sport, pulled a better-dressed rabbit out of a more unassuming hat. JANICE PAGE

Room should have been made in this category for two Afghanistan-related films. Tim Hetherington and Sebastian Junger rightfully earned a nomination for “Restrepo,’’ their jarring digital-video chronicle of life — and the near constant threat of death — at an outpost in the Korengal Valley. But Amir Bar-Lev’s film about Pat Tillman was squeezed out of the competition. Tillman famously jettisoned a lucrative career with the NFL’s to join the Army Rangers. His 2004 death by “friendly fire’’ was covered up by government and military officials who retooled him as a one-dimensional “hero’’ suitable for propaganda. Bar-Lev allowed his family and friends to recall a man. “The Tillman Story’’ burns through layers of deception to expose unadorned truth.

What does it mean to be a best supporting actor? It means that an audience gets excited whenever you show up on screen. It means that you truly support your star, helping him to be believably passionate, thunderously angry, or, in the case of Jesse Eisenberg, cocky and detached. Timberlake does this surprisingly well in David Fincher’s movie about Facebook — so well that you forget that the guy playing Napster cofounder Sean Parker is a recording artist who made his millions by selling records. He was Sean Parker as much as Julia Roberts was Erin Brockovich. He was more Sean Parker than he was Justin Timberlake, and for that, he should have been up for a statue.

As Eduardo Saverin, Mark Zuckerberg’s Harvard classmate at the dawn of Facebook, Garfield represented not just the conscience of the movie, but that of a generation. Betrayed by Zuckerberg, Garfield’s Eduardo, after burning through his wealthy father’s money, plummeted into the chasm that the social networking site created between “friend’’ as noun and as verb. At the deposition for his lawsuit against Zuckerberg, when Eduardo says, “My father won’t even look at me,’’ Garfield heartbreakingly reveals the loss his character has endured, one that cannot be measured, or repaid, in any sum of millions.

Well, of course she wasn’t nominated, since Lewis’s five onscreen minutes show up the rest of the film as the earnestly topical working-class drama it is. Lewis plays the ex-girlfriend of a wrongly convicted man (Sam Rockwell). When star Hilary Swank and others descend on her shack to question Lewis about what she saw and has been sitting on for so many years, “Conviction’’ punches through its democratic reserve to convey a sense of real damage and personal blight. It’s a beautifully bizarre bit of overacting that briefly lifts the film up to a higher, more idiosyncratic level.

Not to give away anything, but Kunis plays two characters in Darren Aronofsky’s lugubrious psychological thriller. She’s the confident, relaxed, funky Lily — the young ballet dancer as a Manhattan Holly Go-Darkly — and she’s the Black Swan that lives inside the head of Natalie Portman’s Nina Sayers, goading the fragile ballerina into sex, drugs, and rock ’n’ roll. The achievement of Kunis’s hugely enjoyable performance is that she lets us see the subtle degrees of difference between the two, even as Nina plunges further into confusion. “Was I good?’’ Lily says. You bet. TB

Since every frame of Roman Polanski’s cruelly comic political thriller seemed to drip with menace, it was deliciously easy for viewers to be as steered off course by Williams’s political wife as was her costar, Ewan McGregor. Caustic and charming by turns, Williams had a slinky way of entering a scene that felt something like surveillance, with a kick of mischief. The National Society of Film Critics rightly honored her tart turn with a best supporting actress award, but unfortunately, the Academy blinked. MB