A little romance: Love and laughter bloom in the garden of 'Gnomeo & Juliet' 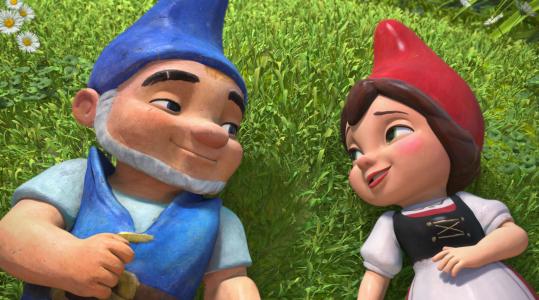 How you respond to the computer-animated family film “Gnomeo & Juliet’’ will depend on a number of factors: How tall you are, whether you think the works of William Shakespeare are to be idly pillaged, base-level cynicism, your feelings about garden statuary. That last is critical. If the sight of a ceramic dwarf in a pose of cutesy outdoor activity doesn’t light up some corner of your soul — whether from unironic delight or kitsch appreciation — you do not belong at this movie.

Pity, that, since this 3-D UK import is as enjoyable as non-Pixar kiddie flicks get, a high-spirited, high-end comic revamp of Big Bill’s eternal tragedy. “Gnomeo & Juliet’’ owes more to the “Toy Story’’ franchise than it should — like the whole idea of backyard figurines coming to life when we’re not looking — but it has its own bizarre charms and a breezy confidence that renders it the very definition of a simple pleasure. I had a great time, as did the 6-year-olds in the row in front of me, as did the snarky college students in the row behind.

You know the story: Two households, both alike in cheesy suburban landscaping, in modern-day England where we lay our scene. Gnomeo (voiced by James McAvoy) is the doughty scion of blue garden gnome Lady Bluebury (Maggie Smith), whose backyard has been in perpetual conflict with the neighboring red-gnome principality of Lord Redbrick (Michael Caine), who puts his daughter, Juliet (Emily Blunt) on a pedestal. No, literally, he puts her on a pedestal in the middle of a garden fountain and tells her never to leave.

Undutiful daughter goes midnight adventuring and meets Gnomeo, who up to now has wasted his time in lawn mower drag races with the evil red Tybalt (Jason Statham, bringing his testosterone growl to a new forum). For a while, the course of true love runs smooth and with winning sweetness — McAvoy and Blunt have genuine aural chemistry — and then the complications kick in. Hearts are broken. Crockery, too.

What “Gnomeo & Juliet’’ lacks in originality it makes up for in appealing leads, a witty, Shakespeare-flecked script that only occasionally tips over into pop-culture pandering, a clean yet detailed visual look (courtesy of the Toronto-based Starz Animation), and a mildly subversive sense of casting that extends to Ozzy Osbourne as a suck-up terra cotta deer in Tybalt’s entourage, Patrick Stewart as a statue of the Bard, and Hulk Hogan as the voice of an infomercial for a lawn mower called the Terraffirminator (“Your lawn will be afraid to grow!’’). Even the film’s 3-D isn’t bothersome, since it provides a spaciousness that makes this tiny tale as large as it needs to be.

Adding a weird nostalgic spin are the Elton John oldies that have been wedged into every conceivable crevice of the film. An orchestral version of “Your Song’’ wells up during the romantic scenes, “Saturday Night’s Alright for Fighting’’ gooses the drag races, “Crocodile Rock’’ gets dragged out for the curtain call. At one point, Juliet’s nerdy suitor Paris (Stephen Merchant) briefly morphs into a gnome version of John at the height of the singer’s diamond-studded camp ’70s glamness.

It turns out that Sir Elton is the executive producer of “Gnomeo & Juliet,’’ and it’s just possible that the entire movie is taking place in a heretofore unexplored corner of his brain. That wouldn’t be more enjoy-ably strange than anything onscreen.

Rated: G (gnome in a thong)