He’s haunted by the spirit of his lost love 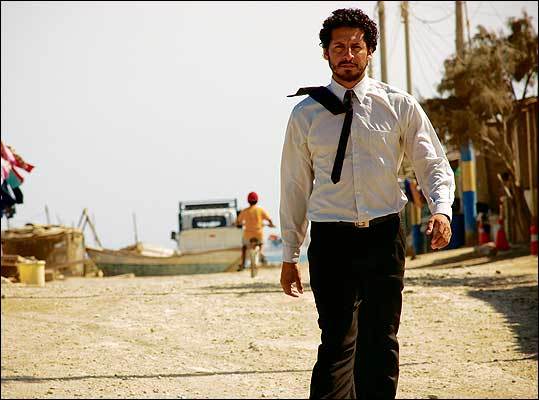 You’re a married fisherman with a pregnant wife. You’ve fallen in love with the handsome artist who, months ago, moved to your tiny close-knit Peruvian coastal town. The villagers gossip about him (“I haven’t seen a single painting!’’) and then about you. Your denials only make you seem guilty: I’m not like him; and by “like him’’ you mean “comfortable with who I am.’’ Then something unexpected happens. The artist is swept out to sea, yet his soul continues to haunt you.

If this scenario sounds even loosely familiar, “Undertow’’ could be the story of your life. This drama is a first feature by Javier Fuentes-Léon that manages to outgrow the limits of its story. Before his accident, Santiago (Manolo Cordona) wants Miguel (Cristian Mercado) to stop living a lie. After, he finds that he needs Miguel with new urgency. He doesn’t want to be alone. Miguel, meanwhile, likes the supernatural arrangement. Since he’s the only person who can see Santiago, it allows Miguel to think he’s walking publicly with him on the beach. Death looks like the only way Miguel can live a happy life with Santiago.

I’m not sure the movie succeeds as a work of logic or physics. For instance, of all the rumors spreading around the village, none appears to involve seeing Miguel holding hands with thin air or rolling around on the beach by himself. “Undertow’’ is a love story that, if you squint, could be a physical comedy, and only loosely is the film touched by tragedy. Tatiana Astengo plays Miguel’s wife, Mariela, and the best thing about her performance is the way she channels hurt into self-motivation.

Like most films about gay men, “Undertow’’ can’t envision a normal life of couplehood. But Fuentes-Léon works in a blithe and breezy magic-realist manner that fends off attendant feelings of depression. The movie’s larger, more serious question is, “What does it mean to be a man?’’ Fuentes-Léon’s answer isn’t unhappy. For Miguel and Santiago, it just arrives too late.

In Spanish, with English subtitles