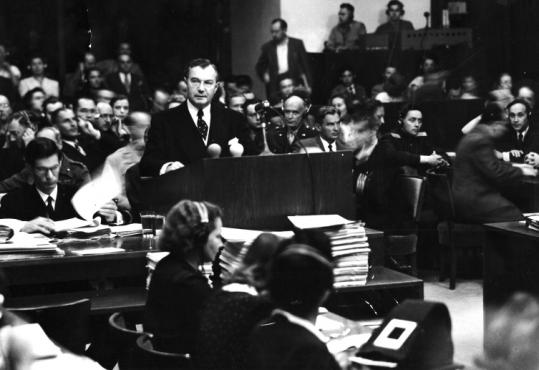 Under the aegis of the US War Department, writer-director Stuart Schulberg and his brother, Budd (scriptwriter for “On the Waterfront’’), made “Nuremberg: Its Lesson for Today.’’ This intelligent and impressively concise documentary about the famous Nazi war crimes trial now gets its first US release more than 60 years after it was made. Sandra Schulberg, Stuart’s daughter, oversaw the restoration of the documentary, along with Josh Waletzky, director of the documentary “Partisans of Vilna.’’

What took so long? The film was made for German audiences. One can see that in the multiple German titles in the film. (The text of the documentary’s original narration is read, and very well, by Liev Schreiber. There are subtitles for the frequent bits of German heard on the soundtrack.) Then the Cold War made the film’s courtroom sequences seem anachronistic, with their shots of Soviet prosecutors and judges alongside US, British, and French counterparts on the International Military Tribunal.

The most striking thing about “Nuremberg’’ is how it manages to be frankly didactic (note the subtitle) without ever at all feeling didactic. Much of that achievement is owing to the briskness with which the documentary moves along and sureness with which it gives its account.

After situating the viewer in the Palace of Justice, in Nuremberg, Schulberg shows us Supreme Court Justice Robert H. Jackson, who served as chief US prosecutor, delivering his opening statement. The documentary then cuts back and forth between the courtroom and archival footage.

That footage begins with pages from Hitler’s “Mein Kampf’’ (text and documents receive considerable attention in “Nuremberg,’’ itself a kind of court brief). We see film of the Reichstag fire, the militarization of the Rhineland, the annexation of Austria and the Sudetenland, Kristallnacht, the outbreak of war, and Nazi atrocities. Some of that footage, of naked concentration camp inmates and corpses, is deeply disturbing, though the camera never lingers.

The 22 defendants in the dock look alternately bored, glum, and defiant. Prosecutors and defense lawyers conduct themselves with almost painful solemnity. The most horrifying bit of testimony comes from former Auschwitz commandant Rudolf Hoess when he describes the sorting process for new prisoners. “Children of tender years were invariably exterminated,’’ he blandly says. “We knew the people were dead [in the gas chambers] when the shrieking stopped.’’

Because of the bright lights required by newsreel cameras, several defendants wear sunglasses, which adds an incongruous element to the proceedings. So do the headphones worn for translation purposes by nearly everyone in the courtroom. That incongruity underscores the uniqueness of the trial — and of the documentary. “Nuremberg’’ is at once history lesson, courtroom drama, and character study. Hermann Goering, for example, usually seen resting his head on his fist, with one earphone askew, looks like the world’s most evil and overindulged little boy, not that anyone would ever apply the words “tender years’’ to him.

NUREMBERG: ITS LESSON FOR TODAY

Written and directed by: Stuart Schulberg

In English and German, with subtitles