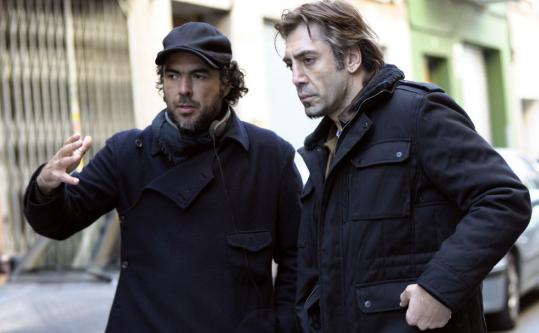 Javier Bardem (right) with director Alejandro González Iñárritu on the Barcelona set of “Biutiful.’’ Iñárritu calls Bardem “one of best actors in the world’’ and says that he wrote the part of Uxbal with him in mind. (Jose Haro/Roadside Attractions)
By Lynda Gorov Globe Correspondent / January 23, 2011

LOS ANGELES — Best to save the baby talk for last. Javier Bardem may be having one with fellow Academy Award winner Penélope Cruz, but he’s also famously private, and few subjects are more personal than readying for birth.

Forget it. There’s no prodding Bardem in that direction. Inquire how first-time fatherhood might influence his film choices: silence. Wonder aloud whether an animated feature is in his future: a low laugh, followed by a change of subject. Ask outright if he’s gained weight along with his wife: not going to happen.

“I can’t answer that,’’ Bardem says after a decisive pause. “It’s too personal. You know me.’’

Actually, US audiences don’t know much about Bardem beyond the basic biographical sketch: Born into an acting family, broke through a decade or so ago as persecuted Cuban writer Reinaldo Arenas in “Before Night Falls,’’ won a best supporting actor statue for his role as a vicious murderer in the Coen brothers’ “No Country for Old Men,’’ now half of one of moviemaking’s hottest couples.

Bardem, 41, may be in Los Angeles physically, but he has hardly gone Hollywood. In fact, his latest project is far off the mainstream movie path. “Biutiful,’’ a subtitled Spanish-language film that runs almost 2 1/2 hours, is a melancholy, often tragic, meditation on cancer, divorce, death, fatherhood, human trafficking, and talking with the dead, among other uncomfortable themes. Bardem plays Uxbal, who works both Barcelona’s underworld and the afterworld, yet never has enough euros for his two children and their loose, bipolar mother.

“Biutiful’’ has received mixed reviews, and Bardem is no shoe-in for another Oscar nomination. The Golden Globes, Screen Actors Guild, and critics awards picks all overlooked him. That has rankled some insider fans.

Julia Roberts, his “Eat, Pray, Love’’ costar, hosted a high-end screening of “Biutiful’’ earlier this month and told Entertainment Weekly magazine: “If there’s not hope for talent, then we’re [expletive].’’ She went on to laud Bardem’s performance as a “magic trick and a miracle all together.’’ Sean Penn and director Michael Mann have been championing him, too. Finally, last week the British Film Academy nominated Bardem for leading actor.

Bardem, however, shrugs off talk of another Oscar with the shaggy-haired nonchalance he brings to so many of his characters. For him, the process is his path. The rest — from editing to awards shows — is beyond his control and not worth worrying over. Having recently completed director Terrence Malick’s as-yet-untitled movie, also starring Rachel McAdams and Ben Affleck, he’s already on to the next thing and the thing after that.

“I’ve been there and sometimes you think about [awards], sometimes you don’t,’’ Bardem says. “In the end, you can’t put your thoughts on that because it doesn’t belong to you. You did what you did and now it’s some people’s opinions on whether it was well done or not. That’s part of our job. You do something. You put it out there, and the moment you do, it doesn’t belong to you anymore. . . . We all did the best we could; and now, based on a million things, not only the work but the campaigning, publicity, there’s a whole different world of things that affect the response of people. Once it’s over, you have to put it behind you.’’

Bardem says all this in English that has improved greatly but can still trip him up. He says acting in a second language, even one that’s becoming second nature, is never as natural as summoning emotions and passions in his native tongue. (“The gap between acting in English and Spanish every time it’s smaller but . . .’’) That was another attraction of “Biutiful’’: the chance to work in Spanish, under the direction of Alejandro González Iñárritu (“Amores Perros,’’ “21 Grams,’’ and “Babel’’), and with a cast and crew who could communicate as one.

Iñárritu says he wrote the part of Uxbal with Bardem in mind, and he was hugely relieved when the actor said yes. He calls Bardem “The Minotaur. He can be Greek. He can be Roman. He has this story in his face.’’ And despite leading-man looks, Bardem brings the lived-in face of a character actor with him to every film, including “Biutiful.’’ It almost helps that a total stranger bashed in his nose without provocation in a bar a decade ago.

“I have known incredible actors with great skills, amazing skills, but there is something that is not true, that does not connect,’’ Iñárritu says. They are performing, they are interpreting, but it is a craft. And I am interested in the truth . . .

“This character has to be in the street life, to be a rude guy, a physical guy, to survive in those neighborhoods,’’ Iñárritu continues. “But he also has an interior life and emotional baggage, and I know from having known him before as a person, that he has those two characteristics, even beyond being one of the best actors in the world.’’

Both writer/director and star know “Biutiful’’ is a hard sell, especially for US audiences more accustomed to the upbeat ending. This is not that. But both also see light in the darkness. Both take umbrage at descriptions of “Biutiful’’ as bleak, calling them simplistic and saying they fail to see how moviegoers won’t empathize with the flawed protagonist played by Bardem. “I think that the world is boiling and ‘Biutiful’ is just my attempt to analyze it,’’ Iñárritu says.

“Yes, it’s sad but it’s also very rewarding,’’ says Bardem, who had long wanted to work with Iñárritu “It’s about the human spirit at its best. . . . ‘Biutiful’ is always about the material. The script was very powerful. It had a lot of dimensions. It was a great, good challenge.’’

Bardem’s choice of projects is less intentional than emotional. He says he looks for quality rather than specific content, but that even after dozens of movies (“Jamon Jamon,’’ Woody Allen’s “Vicky Cristina Barcelona’’), “of course I can be perfectly wrong.’’

For Bardem, “Biutiful’’ fit. But despite absolute confidence in the director, even he couldn’t be sure how it would turn out. He never is. Sometimes it’s better, sometimes it’s worse, always, he says, it’s a surprise. Bardem goes so far as to say he typically doesn’t have a clue until a movie is playing in a theater.

“It’s like the movie is not complete until the first audience watches the movie,’’ he says. “The movie has to be seen and told and have somebody listen to it and watch it and bring some thoughts to it.’’