A new character for her to play: movie star

British actress Manville getting attention for role in 'Another Year' 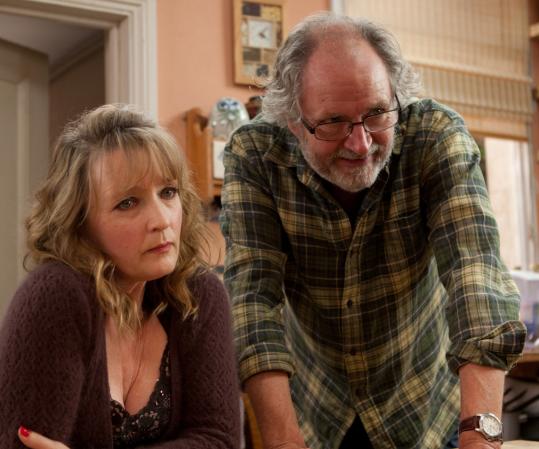 Lesley Manville, who stars with Jim Broadbent in Mike Leigh’s “Another Year," says being a character actor in Britain means something very different — and more substantial — than it does in America. (Simon Mein/Sony Pictures Classics)
By Loren King Globe Correspondent / January 16, 2011

Having emerged as this season’s surprise scene-stealer, Lesley Manville is making the most of her moment.

The veteran British stage and television actress has been featured in nine films directed by Mike Leigh. “I’m the record holder,’’ Manville says. She’s been earning accolades for her high-wire performance in Leigh’s latest, “Another Year.’’ The film follows a four-season cycle in the lives of an aging, happily married couple and the needy friends in their orbit. Even in an ensemble that includes the formidable Jim Broadbent, Ruth Sheen, and Imelda Staunton, Manville’s presence is so dominating that it’s produced an awards-season squabble over whether she’s the lead or a supporting player. Sony Pictures Classics, the film’s distributor, has decided on an all-out campaign for a best actress Oscar nomination after Manville earned best actress honors from the National Board of Review.

“It’s three leading roles, really. It’s complicated for ; I just take a backseat and let them deal with it,’’ says Manville, 54, over the phone from London where she lives with her son, Alfie Oldman, 22, from her brief marriage to actor Gary Oldman. The whirlwind of publicity is new to Manville, who describes herself as “very much a British working actress. I’ve had an amazing career. I’ve worked with A-list theater directors in this country at the National Theater and the Old Vic — that’s the one Kevin Spacey runs. I’ve been quietly getting on with it for all these years.’’

Her long list of roles has ranged from Natasha in “Three Sisters’’ at London’s Royal Court Theater to Mrs. Rose in the BBC miniseries “Cranford’’ to Ouisa Kittredge in “Six Degrees of Separation’’ last year at the Old Vic. But what’s registering Manville on America’s cultural radar is her indelible turn as Mary, the lonely, wine-guzzling friend of the tolerant Tom and Gerri (Broadbent and Sheen). Manville says the film resonates with audiences because it taps into universal themes of aging, loneliness, and mortality.

“People have told me they know someone like Mary, or they’ve understood aspects of her at points in their lives. For her, unfortunately, everything is colored by loneliness. Gerri and Tom were lucky that they met and found love; Mary never found it, and now she finds herself at this age and she’s not embracing anything about the phase of life she’s clearly in. The film slowly peels away her delusions like an onion right down to her raw state.’’

Manville, who acknowledges she’s more glamorous off-screen, had no qualms about showing Mary’s rawness. “It would never occur to me not to look dreadful if that’s the job description.’’ But that’s a British stage actress, not a movie star, talking. “Ruth [Sheen] and I laugh so much when we’re doing question-and-answer sessions with American journalists and they tell us how refreshing it is that our faces move and are expressive [because] we’ve not had a load of botox. We’ve done nothing; these are the only faces we have.’’

Leigh, best known for his slice-of-life portraits of the British working class in films such as “Vera Drake,’’ “High Hopes,’’ and “Happy-Go-Lucky,’’ wouldn’t have it any other way. Famously, the writer/director collaborates for many months with his actors to create characters and their worlds. Manville calls “Another Year’’ Leigh’s most personal film to date. “He’s 67 years old, and this film is about the difficulties of getting old, of the loyalty of relationships, and loneliness. I don’t think I could have made this film 10 or 15 years ago; at least I wouldn’t have played Mary quite so successfully. The richer your experiences, the more you’ve lived through, the greater your catalog is to call upon,’’ she says. “My skill is to take all the universal issues in the film and shove them through the sieve of the character.’’

It’s essential to the story, of course, that Mary show the effects of drinking, from her tipsy, too-much-information conversations to flagrantly inappropriate behavior that embarrasses her friends and has harsh consequences for her. Playing drunk “was a new experience for me,’’ says Manville. “We didn’t over-discuss it. With Mike, you can be doing big, emotional scenes but because of the long process, you’re so connected that you can stop in the middle, have tea and chat, and then go back. I found it tough to get back to the drowsy, half-conscious state, so I’d just be quiet and mildly kept it on the go.’’

Playing a tippler, especially one who “sees herself as a bit of a babe,’’ could result in scenery-chewing, but Manville says the bottom line is that Mary “is big and over the top when she’s drunk. Mary does behave in an extreme way — you can’t avoid it. It’s what she’s like. Mike saw it as organic and believable. If I’m going to a barbecue and I get drunk and talk too much, then that’s what you do. It’s up to Mike. He watches our improvisations and out of that he distills the script. Our job is to be in character and behave as the character would. If it’s perceived as over the top, I can’t do anything about it.’’

Manville’s set to re-team with Leigh this summer on a play that will be developed using the same “voyage of discovery’’ process as his films. Then, who knows? “I’d love it if doors open for me in America. There are directors I’d love to work with there. I’ll always do theater but I’ve got to pay the mortgage,’’ she says. Meanwhile, awards season buzz has stirred up Manville’s two devoted sisters still living in her native Brighton, England. “They are thrilled beyond belief. I tell them every day to calm down,’’ she says. “I want it for them more than anyone else.’’ Manville says she’s been able to discuss the surreal experience with her two colleagues who have been there: Staunton, who was Oscar-nominated in 2004 for “Vera Drake,’’ and Broadbent, who won a supporting actor Oscar for “Iris’’ in 2001. In the end, Manville is too seasoned a pro not to realize that the attention will be fleeting.

“I’m a character actor. In the United States, that tends to mean old people who play small parts. Here it means anyone who plays people not like them,’’ she says. “I love playing women at the far ends of the social scale. I’ve done it all my life; that’s where my ability lies. Unlike Mary, I’ve very comfortable in my skin — thankfully.’’