A superhero whose strength is boorishness: 'Hornet' has a subversive streak 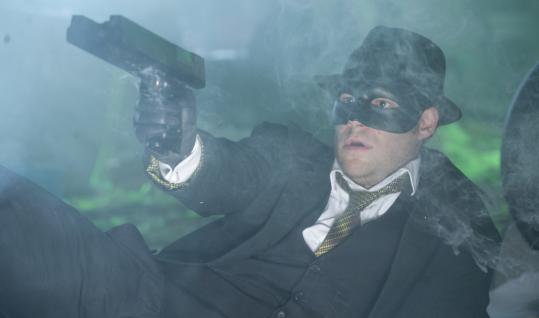 The new film adaptation of “The Green Hornet’’ raises a few intriguing questions. What if a superhero didn’t just pretend to be a loud, obnoxious creep as part of his secret identity but really was a loud, obnoxious creep? What if his sidekick turned out to have all the talent? And what would happen if the slaphappy French filmmaker Michel Gondry (“Eternal Sunshine of the Spotless Mind,’’ “Be Kind Rewind’’) tackled a big-money action extravaganza?

We have our answers. The first half of “Green Hornet’’ undermines every promise a superhero movie is supposed to make with genuinely subversive comic verve. It’s off-putting, rude, misshapen, and more often than not hysterically funny. The second half, sadly, is an ear-splitting train wreck.

A lot of people are going to be offended, and I can’t say I blame them: The movie waves its hero’s boorishness like a red flag. Co-writer/star Seth Rogen takes the classic archetype of the playboy by day/masked avenger by night — from Batman to Iron Man an established source of Hollywood profits — and reveals him for a braying sociopath. In this telling, pampered newspaper heir Britt Reid is an idiot getting by on his money and on the mad skills of his employee and new BFF, Kato (Taiwanese pop singer Jay Chou, arriving in the US pop arena with a deft three-point landing).

Why the revisionism? In part, because the Green Hornet was always the superhero equivalent of an independent vendor, created for radio in the 1930s and showing up in movie serials and on TV (the 1966 series costarred Bruce Lee as Kato). The character isn’t owned by Marvel or DC, so he’s a free agent — fair game for the anarchic likes of Kevin Smith (the “Clerks’’ director took a whack at a Hornet script that never got made), Rogen and co-writer Evan Goldberg, and Gondry, whose marvelously rickety shaggy-dog contraptions are as far from Marvel’s sleek money machines as you can get.

So “The Green Hornet’’ is a series of comic riffs — not so much a parody but, like Gondry’s “Be Kind Rewind,’’ a tale of two boobs running with a bad idea until it turns unexpectedly excellent. Having lost his disapproving white-knight father (Tom Wilkinson) to a mysterious bee sting, Britt bonds with dad’s Chinese mechanic over the merits of the perfect latte and drastically retooled foreign cars. What starts as a drunken prank becomes a bumptious career in crime-fighting — wholly ridiculous until LA’s preening Mr. Big (Christoph Waltz, cashing his “Inglourious Basterds’’ Oscar win with a shrug) decides to fight back.

If you get into its off-kilter rhythms, the movie’s first hour can be startlingly funny, with the contrast between Kato’s efficiency and Britt’s general uselessness milked for all its worth. (The Green Hornet’s gas-bomb pistol, it turns out, is invented only because the hero can’t be trusted with a real gun.) There are two ways to play the Asian-manservant thing: Either treat it as a politically incorrect no-flyover zone or dig right into its racially loaded contradictions. Gondry and his stars dig, wickedly dismantling the master-servant dynamic in favor of boss-employee, then buddy-buddy, then rival-rival, and finally something like unequal partners, Kato being slightly more equal than Britt.

There’s a very tenuous plot — something involving the crime boss and a slick district attorney (David Harbour) — but the filmmakers aren’t interested. It’s like they got up in the morning with the vague idea of making a superhero film and here it is the mid-afternoon and they haven’t got around to it yet. So they turn up the heat: After a ridiculous room-trashing fistfight between the hero and his sidekick (about as ridiculous as the similar fight in “Iron Man 2’’), “The Green Hornet’’ devolves into an overlong, confusingly shot demolition derby. What starts as a lark turns into a headache.

Did I mention that the movie’s in 3-D? Someone should have let Gondry know. Except for a few swooping highway scenes and one eye-dazzling multi-split-screen montage — each panel taking place at a different depth — “Hornet’’ could have and should have been shot in two dimensions. (If there’s satire there, it’s at the consumer’s expense.) But the entire movie’s a flip-off in a sense, sustained by its playful spirits and love of anarchy until the whole thing comes crashing down. In the end, there are only two special effects on display: Chou, with his charismatic bad-boy cool, and Rogen, who scrawls all over the movie like a baby with a crayon.

Because superhero movies have to feature a Girl, Cameron Diaz turns up as Lenore Case, Britt’s overeducated secretary at the newspaper. She’s his Pepper Potts, except that Pepper eventually melts while Lenore takes one look at these two and can’t be bothered. The role’s disposable and intentionally rather cruel. Chou plays his role as something of a brat, too, and so does Waltz, whose character decides in the third act that he isn’t scary enough and gives himself a super-makeover. “The Green Hornet’’ paints heroes and villains alike as emotionally needy little boys playing dress-up with live ammunition. If the movie works for you at all, you’ll never look at the Dark Knight the same again.