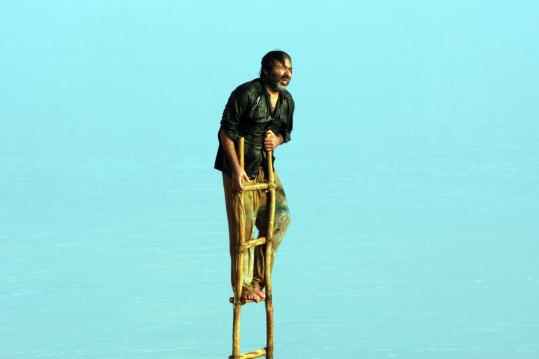 “The White Meadows,’’ a film by Mohammad Rasoulof in collaboration with Jafar Panahi, tells the fable-like story of Rahmat, who collects tears as people unburden their sorrows into glass jars. (M-Line Distribution)
By Loren King Globe Correspondent / January 9, 2011

The annual Boston Festival of Films from Iran (Friday through Jan. 29 at the Museum of Fine Arts) is one of the most extensive exhibitions of contemporary Iranian cinema in the United States. This year’s edition showcases the compelling documentaries and innovative features that audiences have come to expect in the festival’s 18 years, and from Iranian filmmakers, many of them living in exile or persecuted because of their commitment to portraying the realities of political and social oppression. Among the most notable is internationally acclaimed director Jafar Panahi, who was handed a six-year jail term last month for his “anti-regime’’ film about the unrest that rocked Iran in June 2009 after the disputed reelection of President Mahmoud Ahmadinejad.

Panahi’s collaborator, director Mohammad Rasoulof, whose feature “The White Meadows’’ closes the festival on Jan. 29 (Panahi edited the film), received the same six-year sentence. He was arrested along with Panahi and 14 others last March (most were later released). Carter Long, the Katharine Stone White Curator of Film and Video at the MFA, who programmed the festival with Tom Vick of the Freer and Sackler Galleries in Washington, D.C., said he anticipates “some form of acknowledgment’’ of the filmmakers’ sentence during the festival. “We received a number of suggestions and pledges of support for some type of relevant programming,’’ said Long.

“The White Meadows’’ is one of several films in this year’s event to ad dress themes of artistic expression in an oppressive climate. Writer-director Rasoulof weaves poetry, mythology, metaphor, and the absurd to tell the fable-like story of Rahmat, who sails from island to island on salt-filled Lake Urmia to collect tears as people unburden their sorrows into glass jars. It is a moody and imaginative tale that challenges contemporary Iranian society’s notions of misogyny, family, and religious zealotry.

“The mesmerizing artfulness of Iranian cinema will be at the forefront in Mohammad Rasoulof’s beautiful and poignant ‘The White Meadows,’ which is not only my favorite film in this year’s festival, but is very likely my favorite film from the last year,’’ said Long.

Panahi and Rasoulof may be the best-known examples of Iran’s persecution of its artists, but other directors represented in the festival also struggle against censorship and must work outside of their homeland. Many of the topical films in this year’s lineup are directed by women and deal with political oppression and social constraints for women in Iran.

Rakhshan Bani-Etemad is probably Iran’s best-known and most prolific female filmmaker. Her latest documentary, “We Are Half of Iran’s Population’’ (screening Jan. 15-16), chronicles attempts by various coalitions of women activists in Iran to make their voices heard as the country readied for the 2009 presidential election. In the film, journalists, lawyers, feminists, humanitarians, and students speak directly to the camera and urge the presidential candidates to consider issues facing women, including oppressive divorce laws, unemployment, unequal pay, and the horrific honor killings that still take place in rural areas of the country. The director invited the four presidential candidates to watch her finished film: Mehdi Karroubi, Mir Hossein Mousavi, and Mohsen Rezaei attended, along with their wives, who offer their own views (often with much more urgency than their husbands) after the screening. Only Ahmadinejad, the controversial winner, declined the invitation. “We Are Half of Iran’s Population’’ will be shown with Reza Haeri’s “All Restrictions End,’’ a 30-minute, free-form film that documents Iran’s history through the evolution of clothes and fashion.

The plight of women in Iran is also the subject of two notable features. In Shabnam Orfinejad’s directorial debut, “There’s Nothing Behind the Door’’ (Jan. 27-28), the lives of four women intertwine. In one story, Leila, accompanied by a policeman, arrives at her husband’s apartment after being granted custody of their daughter. Despite repeated attempts, there is no response from her husband. Influenced by American films such as “Memento,’’ the film unfolds in a series of flashbacks and becomes more complex as the characters contradict each other’s description of events.

“My Tehran for Sale’’ (Jan. 19-20) is poet and filmmaker Granaz Moussavi’s apparently autobiographical debut feature about a young actress in Tehran who is banned from performing. Like many young people in Iran, she is forced to lead a secret life in order to express herself artistically. At an underground rave, she meets Iranian born Saman, now an Australian citizen, who offers her the opportunity to escape the country and live a life without fear. Currently a doctoral candidate at the University of Western Sydney, Moussavi shot her film, an Australian-Iranian co-production, on location in Tehran, where she filmed under the radar at great risk to all involved, according to IndieWire.

The personal and political meet head-on in Nahid Persson Sarvestani’s documentary “The Queen and I’’ (Jan. 26-27). Disillusioned by the Islamic revolution that forced her into exile, Persson Sarvestani seeks out Queen Farah Pahlavi, wife of the late former shah of Iran. Over the course of two years of filming, Persson Sarvestani and Pahlavi engage in confrontations that eventually evolve into an unpredictable and curious journey of two women in exile.

Robert Adanto’s “Pearls on the Ocean Floor’’ (Jan. 16) offers a look at women artists who speak candidly about how their work seeks to address issues of identity, gender, social restrictions, religion and secular modernity, tradition, and evolution. Through their words and their art, these women reveal truths about Iran.

Mohsen Ostad Ali Makhmalbaf is at the forefront of the “new wave’’ of Iranian filmmakers who rose to international prominence over the past two decades. Time magazine selected Makhmalbaf’s 2001 film, “Kandahar,’’ as one of top 100 films of all time. Makhmalbaf, who left Iran in 2005 shortly after the election of Ahmadinejad and now lives in Paris, is represented in this festival by his documentary “We’ll Get Used to It’’ (Jan. 22) which chronicles life inside a Tehran shelter for runaway girls. As five troubled young women tell their stories, a portrait emerges of the wide-ranging social ills in Iran. Baktash Abtin’s 42-minute documentary, “Park Mark,’’ which screens with “We’ll Get Used to It,’’ is about a once-prosperous US citizen, husband, and father who is now a homeless drug addict living on the streets of Tehran.

Mothers, sisters, wives, and daughters are at the center of the powerful documentary “All My Mothers’’ (Jan. 26) by Ebrahim Saeedi and Zahavi Sanjavi, both natives of Iraqi Kurdistan, who were forced to flee when Saddam Hussein launched his vicious campaign against Iraqi Kurds. Combining archival footage with eyewitness accounts, their film details the horrors of the 30-year reign of the Baathist regime. Women, their faces ravaged from time and grief, still carry photographs of the men who disappeared during purges in 1983, leaving the villages populated almost exclusively by females. The discovery of one of the mass graves in the southern deserts of Iraq after 24 years became the basis for this haunting film. “All My Mothers’’ screens with “Molf-e-Gand,’’ Mahmood Rahmani’s intimate account of his childhood memories of the Iran-Iraq War (1980-88). Talking directly to the camera and filling his stories with expressive and vivid detail, Rahmani crafts a monologue that brings to life the enduring traumas of a generation.

Other highlights of this year’s festival include the opening night film, Babak Jalali’s “Frontier Blues’’ (Jan. 14-16), which features a cast of nonprofessional actors and weaves four men’s stories, each set in Iran’s multiethnic region of Turkmenistan; Alireza Davoodnejad’s “Salve’’ (Jan. 21-22) about a girl from a poor family who falls in love with a drug dealer and runs away from home; Mohsen Abdolvahab’s “Please Do Not Disturb’’ (Jan. 19-20), three interweaving stories that take place during a single day in Tehran; Homayoun Asadian’s “Gold and Copper’’ (Jan. 21-22) about a clerical student forced to reexamine his values after his wife develops multiple sclerosis; and Fardin Saheb Zamani’s “There Are Things You Don’t Know’’ (Jan. 28-29), a portrait of Tehran at night through the eyes of a taciturn cab driver.