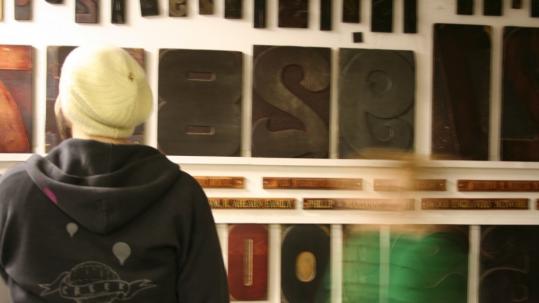 A printmaker looks at a wall of woodblock letters in the new film “Typeface.’’ (Kartemquin Films)
By Wesley Morris Globe Staff / January 7, 2011

The most sideways film in the Art on Film series at the Museum of Fine Arts is a little documentary about the increasingly evaporating art of wood type. It’s called “Typeface’’ and it’s not the filmmaking that’s sideways. Justine Nagan’s filmmaking is straightforwardly basic. But the idea of the series including an hourlong immersion into bygone printcraft is inspired.

The movie holes up mostly at the Hamilton Wood Type and Printing Museum in tiny Two Rivers, Wis., but visits other print boutiques. And what you get from the graduate students who visit the Hamilton and from the men and women who work in the shops is an everlasting awe that the thousands of wood blocks are even extant. Their widespread use in the 19th century, of course, was a casualty of the digitalization of everything in the 20th century.

Purists object to use of polymer-photograuve and computers, and the pleasure they appear to take in cranking giant presses and inking the wheels is somewhat infectious. You want to stop by Two Rivers. “Typeface’’ provides a small history of James Edward Hamilton, who became a sort of print baron and traces how wood types, and, by extension, a lot of manual typesetting, have gone from the way things are to an artisanal practice. Operating a press, one woman in Chicago says that the majority of work her shop gets is for wedding invitations. And in her voice you can hear lament.

At: Museum of Fine Arts (various screenings today through Jan. 14)