Giving it her best shot: Gwyneth Paltrow is country strong, but the script is a lowdown shame 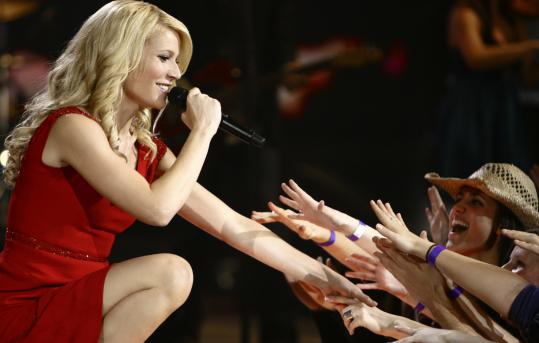 "Country Strong’’ is a title that calls to mind a pickup truck. Only in a work of science-fiction would it suffice as a description of Gwyneth Paltrow. In reality, such a woman would be Gretchen Wilson. But without a trace of self-doubt, Paltrow gives us brief, unanticipated visions of Super Duties and Tundras. She plays Kelly Canter, a major country-music star with six Grammys and a serious drinking problem. If Faith Hill were one of the partiers on just about any reality show, she might be Kelly Canter.

Pushing her words together until they produce a honeyed Texas drawl, Paltrow makes the part look natural. She’s not impersonating an actual singer, so she seems merely like a twangy, alcoholic version of herself. She should be stopped from dancing in enormous arenas, but her thin voice is rather pretty, even in songs with such lyrics as, “If you got it, flaunt it/ Make the cowboys want it.’’

When a fit of relapse sends her braying atop the bar of a dive spot, or teary remorse for other misdeeds stains her face with mascara and eyeliner, Paltrow manages to leave a few stops unpulled. But this peculiar movie, written and directed by Shana Feste, doesn’t know what to think about Kelly or what to do with her. First the tabloids insist she’s crazy. Then the movie joins in, having its heroine insist whenever she can that she’s sane. By the time the film reaches the most absurd and least earned of its many conclusions (if “Country Strong’’ ends once, it ends nine times), it’s fair to assume that Feste has mistaken her protagonist for Lindsay Lohan or Courtney Love.

The film is essentially the story of Kelly’s first tour since a boozy stage fiasco when she was five months pregnant. Her husband and manager, James (Tim McGraw, Mr. Faith Hill), pulls her prematurely out of rehab and puts her back on the road. He hires two opening acts. One happens to be Kelly’s sponsor, Beau Hutton (Garrett Hedlund), who also happens to be Kelly’s lover and happens to think that this is all too much too soon for her. Leighton Meester plays the other act, a squeaky clean beauty queen and aspiring star named Chiles Stanton, which are the two best consecutive words in Feste’s screenplay.

The first few shows are train wrecks. Kelly is either blinkered or AWOL. The problem with her low is that we’ve never seen her at her professional best. We know she’s in rough shape now, but we need to know what the fuss is all about. Are there no music videos, Republican National Convention performances, or “Sunday Night Football’’ intros to show us her brilliance? And is a woman purported to be this much of a mess really fit to give advice that sounds as sensible and insightful as hers does? She might be three or four different people after all.

A lot of the Canters’ antics feel like showbiz-marriage cliches in which two people spend years taking advantage of each other. The cliches aren’t a crime, but Feste applies no psychological depth or simple perception to any of these relationships. It’s a movie that could’ve been made by a gossip blog. To that end, the filmmaker’s best idea is to have her four characters spinning in and out of each others’ arms.

James may have a thing for Chiles, and we already know how Kelly and Beau feel about each other. But Beau merely pretends to dislike Chiles, who’s so virginal, wide-eyed, and star-struck that she’d accept an invitation to the hotel suite of any of the other three. That the movie doesn’t culminate with a scene of these four pawing at each on a king bed constitutes a perverse moral failure. But when Kelly is nastily drunk and bitter about how drinking cost her a child, she suggests that Feste missed an opportunity to make “Who’s Afraid of Shania Twain?’’

McGraw is no Richard Burton. But he lends the proceedings the sort of authenticity needed for any country-music drama starring the wife of the guy from Coldplay. And the long, mostly silent woman by Kelly’s side for many scenes is the singer and songwriter Marshall Chapman. Feste adds more risible stabs at credibility. Before she goes on stage, Kelly opens a gift from celebrity well-wishers, including someone named “Emmylou.’’ And one review swears that Beau is the next Townes Van Zandt. Yet, to be fair, Hedlund makes a case for himself as the kind of sex symbol that failed to materialize in all his stunt work in the current “Tron’’ sequel. Like Paltrow and Meester, he does his own singing. And his voice has a smoker’s depth. When he sings, a cluster of veins spreads like Old-Testament ivy around his Adam’s apple. The effort he makes to achieve the virility missing at the moment from young American movie actors is almost touching.

But Meester is the best thing in the movie. She’s just doing Reese Witherspoon’s June Carter Cash in “Walk the Line’’ with dabs of Miley Cyrus and Kellie Pickler. But it’s not an impersonation; it’s a performance with its own comedy and sweetness. Kelly Canter has seven platinum records. Chiles Stanton says she has seven different smiles. Come the movie’s embarrassing climactic stab at tragedy, you regret that “Country Strong’’ hadn’t been more about the legend of Chiles’s dental work.

Directed and written by: Shana Feste