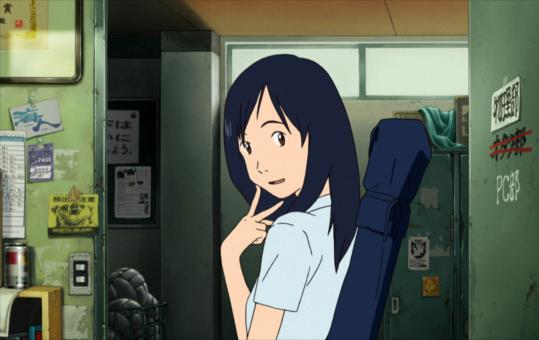 Back in 2006, Japan’s Mamoru Hosoda made one of the best anime features of recent years, a gentle sci-fi head trip called “The Girl Who Leapt Through Time.’’ “Summer Wars’’ is the belated follow-up, fanciful and beautifully drawn but leaning a bit too much on clichés and coincidences to stand with the earlier movie. Anyone interested in Japanimation’s more ambitious urges should still check it out.

“Summer Wars’’ comes complete with a quiet but firm warning: We live in virtual worlds at our peril. Half of the film takes place in an online universe called Oz, where billions of global users pick cartoon avatars, make friends, play games, and transact business. Any similarity to Second Life is strictly intentional.

Out in the real world, a gawky teenage math whiz named Kenji (voiced by Michael Sinterniklaas in this English-language dub) travels with the girl of his dreams, Natsuki (Brina Palencia), to her family’s ancestral home outside the city of Ueda. There, Natsuki passes him off as her fiance to her large, boisterous clan of uncles, aunts, and cousins, hoping to please the matriarch, Granny Sakae (Pam Dougherty), before the old lady’s 90th birthday.

At around this time, a rogue gaming program called Love Machine invades Oz, gaining strength with each avatar it gobbles down; it soon has enough passwords and privileges to gain control of the planet’s infrastructure. Traffic goes haywire, emergency systems flash false alarms, and the global economy shudders to a halt.

Remarkably, almost all the people responsible for creating and combating the renegade AI are part of the Jinnouchi family: prodigal son Wabisuke (Michael Tatum), a lanky rebel for whom Natsuki still carries a torch and who made the mistake of selling his program to the US military (but of course); Kazuma (Maxey Whitehead), a 13-year-old cousin who happens to be the best gamer in all of Oz; two uncles who have deep resources in, respectively, supercomputers and top-secret defense communications. Everything in this planetary crisis comes down to one ancient clan — including a space probe that Love Machine aims at their mansion in the pro forma ticking-clock climax.

As with “The Girl Who Leapt Through Time’’ and the work of Hayao Miyazaki, “Summer Wars’’ is most appealing in its hushed moments — there’s a pan across a porch at sunrise, the extended Jinnouchi family silhouetted along its length, that’s sheer pictorial magic. In its unobtrusive way, the screenplay by Satoko Okudera (who also wrote “Girl’’) stakes a claim for the non-virtual world of history and of family ties that stretch back to Japan’s medieval era. The scenes set in Oz are visually ravishing explorations of white-on-white cyberspace, but the hectic gaming action sequences feel curiously passé. In “Summer Wars,’’ it’s what’s old that’s made to seem refreshingly new.