Mass. natives use clout to carve out a niche for indies 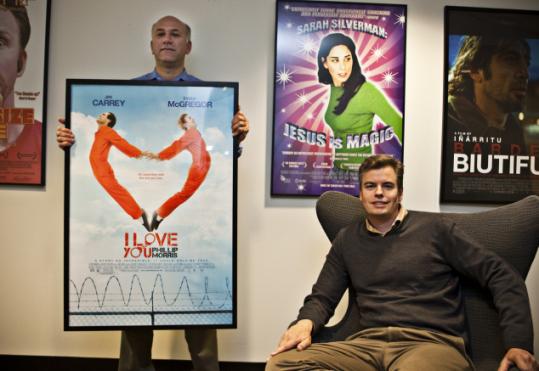 And more. Chatting with the copresidents of independent film distributor Roadside Attractions is part art house, part funhouse, covering an eclectic mix of movies that might well have gone unseen if not for their efforts.

Cohen and d’Arbeloff, personal as well as professional partners, take their responsibilities to the indie world seriously. But they also appreciate a laugh-out-loud movie as much as the next person, especially if it makes audiences think along the way. Morgan Spurlock’s “Super Size Me’’ was Roadside’s first film, in 2004.

In the years since, there has been “Good Hair’’ by comedian Chris Rock, “The September Issue,’’ critical darling “Winter’s Bone,’’ and the Academy Award-winning “The Cove,’’ among others. Recently opened is “I Love You Phillip Morris,’’ starring Jim Carrey and Ewan McGregor as prison inmates who fall in love.

At film festivals these days, Cohen and d’Arbeloff are on the short list of go-to guys for independent filmmakers hoping their work will be seen outside Aspen, Tribeca, or Toronto. And that list is only getting shorter as Roadside’s profile rises.

The reason: a combination of art-house movie closings, fewer specialized film companies, and less interest in indies by major studio units once focused on independents. Plus, everyone is more cautious about taking on marketing challenges in this economy.

“The independent world is a very, very small world, especially now that so many independent [distributors] have washed up,’’ said Louis Psihoyos, director of “The Cove.’’ “To have their stamp of approval is incredibly important in that world to get into theaters that have a good reputation. You’re immediately accepted into this family of films that aren’t going to be the normal Hollywood fodder.’’

Or as Spurlock put it, after noting that he has sent the company project after project since “Super Size Me’’ in hopes of working with Roadside again: “At Sundance, we realized that the studios weren’t going to do this. Bang, bang, bang, one by one, the heads of acquisitions would come up and say, ‘We love this movie,’ but then lean in quietly and say, ‘But we could never put this movie out.’ They said the one who would was Roadside.’’

That sort of talk doesn’t puff up Cohen and d’Arbeloff, who, with decades in the film business between them in a variety of capacities, understand exactly what even top-notch independent films are up against. They have had some solid box office successes with films they picked up at festivals for $1 million, and sometimes much, much less. But even the best advertising campaigns and trailers don’t guarantee ticket buyers will turn out.

“We talk about this a lot,’’ said Cohen (Newton North High like his dad, Harvard undergrad). “If you make a studio movie with big stars and a big budget and an experienced director, if it comes out a B- or even a C+, you can still make money. The same grade with an independent film will lose every dime that was put into it. The target is so small with an independent film that you have to make it an A.’’

Not every film has worked out for Roadside, and it’s rueful smiles all around when they say they can’t always figure out what went wrong. Still, Cohen and d’Arbeloff tend to talk about the movies they distribute the same way enthralled parents talk about their babies: lots of details and a healthy dose of pride.

For instance, d’Arbeloff (Brookline raised, Harvard MBA) has a charming story about walking home from the office the night “Super Size Me’’ debuted on Showtime, after its theatrical release, and seeing it flicker on TV after TV in the homes he passed. He could not believe how well the first movie Roadside had released, together with Samuel Goldwyn Films, had done. The gross-out documentary, about what fast food did to one man in a single month, made more than $11 million

So far “Amazing Grace,’’ about pioneering British abolitionist William Wilberforce and the emancipation of slaves, has done the best box office for Roadside, with $21.3 million in domestic ticket sales. With more than $3.8 million in sales, “The September Issue,’’ about Vogue editor Anna Wintour, was one of the highest-grossing documentaries of 2009.

But it’s “Winter’s Bone,’’ the harrowing tale of an Ozark Mountain girl’s search for her drug-dealing father, that the partners expect to be the most profitable for their seven-year-old company.

The film has taken in about $6 million at the box office after a tightly controlled marketing campaign, and it has received seven Independent Spirit nominations and a Golden Globe nod for star Jennifer Lawrence. They also have high hopes for “Biutiful’’ (nominated for a Golden Globe in the foreign language category), starring Javier Bardem and expected to open locally this month.

“At film festivals, people applaud the performances and the filmmaking and the gritty realism,’’ d’Arbeloff said. “You get points for all that. But does that translate into the public really wanting to see it? We looked at ‘Winter’s Bone,’ and we knew critics would talk about it, but our goal was to make people who are frequent filmgoers, who start the word-of-mouth process, want to go see it.’’

Roadside hasn’t had a huge indie breakout yet, along the lines of “The Blair Witch Project,’’ “Fargo,’’ or “Brokeback Mountain.’’ Still, they have no shortage of films brought to their attention at festivals or when they’re near completion, since Roadside rarely gets involved before then. Most get turned down. Part of Roadside’s business model is to release relatively few films. That strategy, along with a lean staff of 17 and the sale of a minority stake to Lionsgate in 2007, has helped Roadside do more than just weather a weak economy.

“We’re doing films that spring from the most part from independent filmmakers who are making their passion projects,’’ said Cohen, a former agent. “We’re kind of trying to translate those to some commercial viability. What was the intention of the movie when it was made? Can that intention translate to butts in seats? It’s a complex thing.’’

Not every movie they market is to their tastes. But the partners are interested in reaching audiences not typically tapped by the art house world. The already-released “Bella,’’ about a crisis pregnancy, has an antiabortion edge to it. Roadside did heavy religious outreach.

There are other niches of interest to them. “From Mexico with Love,’’ about a boxer in Texas fighting on behalf of his family, was an English-language film for a bilingual audience. That’s the movie Cohen cited as an example of one he promoted, but probably wouldn’t buy a ticket to see. But it tested well with Latino audiences, and Roadside was excited to see what it could make of the movie. It didn’t work out as well as hoped, but Cohen said they learned a lot and will try to tempt that market again.

“We like things that aren’t politically correct,’’ d’Arbeloff said, referring to “I Love You Phillip Morris.’’ “We like to shake it up a bit.’’

Added Cohen, “We’re putting out this movie, which, granted, is about criminality, but it’s also a great love story about two guys, starring two big movie stars. It’s at an important cultural moment, and we’re really proud of that.’’

Together since 1995, and fathers to a 5-year-old boy, Cohen and d’Arbeloff had wide-ranging entertainment careers before Roadside, which they decided to launch about the same time they decided to have a child.

Cohen’s history includes a production company for TV movies, stints at HBO and Paramount Studios, and a move to Los Angeles in 1987 that landed him at Samuel Goldwyn, which he calls the seminal job of his career because it taught him about film distribution, marketing, and publicity. Always on the business side, and in and out of independent film, he made historical epics and was also an agent for the UTA agency for seven years.

D’Arbeloff, who grew up going to the old Nickelodeon and Orson Welles theaters, said he saw his first independent film when his seventh-grade teacher took the class to see Francois Truffaut’s “Small Change’’ at the Coolidge Corner Theatre. A TV internship got him to LA and into reality television shows such as “Cops’’ and “America’s Most Wanted.’’ He’s worked for B-movie director Roger Corman and produced documentaries and small narrative films, among other jobs.

“The exciting and different thing about our world is it’s always about what’s new,’’ Cohen said. “A repeat of what’s old doesn’t really work commercially in our world. Trust me, if it could, we would be happy to do it.’’

Added d’Arbeloff, “We’re where the rubber meets the road. . . . We have to evaluate a movie’s viability in the cold, hard light of day outside of a film festival. It’s not as hard as making movies, but it’s harder than you think.’’