Joel and Ethan Coen: A study in subversion 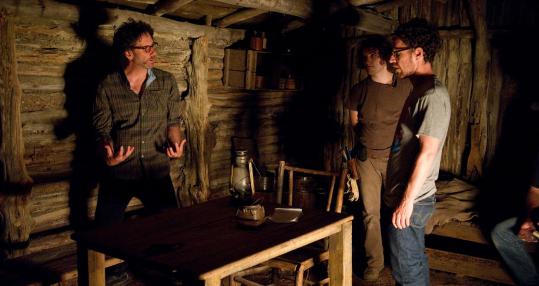 “True Grit,’’ the Coen brothers’ reworking of the Oscar-winning John Wayne western from 1969, is, according to the official records, the directors’ second remake, following in the (mostly undistinguished) footsteps of 2004’s “The Ladykillers.’’

Given the mixed success they had with their first remake, one might be surprised that Joel and Ethan Coen would so readily revisit another beloved older film. “The Ladykillers’’ had been a pallid reworking of the classic Ealing Studios comedy, with Alec Guinness’s murderous mastermind reduced to the level of Tom Hanks’s Southern-fried ninny, surrounded by a patchwork array of dimwitted sidekicks.

And yet, when studied in the proper light — a slightly warped, Coensian light, if you will — their entire career, from their debut, “Blood Simple,’’ to “True Grit,’’ can be seen as a series of stealth remakes, overhauling obscure or overlooked films, often entire genres, in one fell swoop. Immersed in Hollywood history, Joel and Ethan Coen are the mad hatters of the American film, using their intimate knowledge to subvert its well-honed order.

Screwball comedy, film noir, the detective film, the western, the comedy of remarriage: each is less a blank canvas than a jigsaw puzzle waiting to be completed. The pieces are already formed, but where most filmmakers seek to match the picture on the box, the Coens prefer the jumble. Selecting the unlikeliest jumping-off points, their films make a glorious hash of American film history, treating classics and forgettable genre retreads as equally worthy of their drastic, often-comic re-editing.

This tendency dates back to their earliest work, with 1984’s “Blood Simple,’’ a noir infected by a warped sense of humor that treats murder and revenge as punch lines. Their second film, “Raising Arizona’’ (1987), extends and deepens the skewering of genre, a screwball comedy that is itself a parodic evocation of traditional screwball. The underrated “The Hudsucker Proxy’’ (1994) summons the ghosts of Preston Sturges and Frank Capra and has the two titans of screwball — one antic, the other manic — duke it out for supremacy.

“Miller’s Crossing’’ (1990) is a gangster film reflected in a warped mirror, its genre-appropriate somberness undercut by the linguistic trickery of its characters. Its mobsters and henchmen behave in the manner we have come to expect. And yet, Jon Polito’s mob boss Johnny Caspar speaks a bizarre, Yiddish-inflected English that appears to have come from another film entirely: “What is this, the high hat?’’ A loving homage to the genre that birthed “The Public Enemy’’ and “The Godfather,’’ “Miller’s Crossing’’ is also a deconstruction of the gangster film, uncovering the absurdity partially hidden beneath the tommy-guns-and-molls veneer. “Burn After Reading’’ (2008) is a similar dismantling of the spy-film caper, its absurdity far closer to the surface, like “Three Days of the Condor’’ performed by a troupe of inept clowns. “Barton Fink’’ (1991) extended the mockery from Hollywood genre to Hollywood itself, savagely parodying the industry’s pretensions of grandeur.

Many contemporary filmgoers are unfamiliar with the comedies of remarriage, a subset of the screwball comedy that flourished briefly in the late 1930s and early 1940s. Fewer still could imagine the relevance of a comedic style that revolved around the frenzied juggling of past and present spouses in an era of no-fault divorce and rampant infidelity. And yet, “Intolerable Cruelty’’ (2003), the Coen brothers’ most underrated film, revisits the likes of “My Favorite Wife’’ and “The Awful Truth,’’ recasting those films as a romantic pas-de-deux between divorce lawyer George Clooney and gold digger extraordinaire Catherine Zeta-Jones. Where once the stakes had been dead serious — love, happiness — the combat was now the thing, with the supremely attractive leads surrounded by an array of grotesques borrowed from some other film entirely.

Even at their most straight-faced, as with “Miller’s Crossing,’’ 2001’s “The Man Who Wasn’t There,’’ and the Oscar-winning “No Country for Old Men’’ (2007), there is an element of mockery lurking beneath the surface of the Coens’ work, as if all genres — all styles — were equally ludicrous at heart, and equally requiring the jab of their needling aesthetic. “No Country’’ was a classical western, but the openness of its plot, and its insistence on undercutting the audience’s expectations, indicated a desire to expose the western to the elements, and to the Coens’ subtle mockery. The reversals could go either way; “Fargo’’ (1996), at first an overbroad burlesque of the murder mystery, its big Minnesota accents pegging the film as more comedy than thriller, reveals a hidden core of moral rigor one might never have expected amidst the “gees’’ and “ohs.’’ “A Serious Man’’ (2009), too, snuck hidden reserves of terror and uncertainty into the Coens’ nostalgic evocation of their own childhood.

“The Big Lebowski’’ (1998), the Coens’ greatest film, is also their most antic remix, jumbling together Howard Hawks’s “The Big Sleep’’ and Robert Altman’s “The Long Goodbye’’ — old- and new-Hollywood visions of the amoral City of Angels — and seasoning with a mélange of distinctly Coensian elements borrowed from other genres entirely, like the German-nihilist baddies and Polito’s hard-boiled shamus, seemingly on loan from “Miller’s Crossing.’’ “O Brother, Where Art Thou?’’ (2000), their next film, was a cineaste’s fever dream, borrowing the title of the film-within-a-film from Sturges’s bittersweet classic, “Sullivan’s Travels,’’ and lifting shaggy-dog tales from practically everywhere, including Homer and “I Am a Fugitive From a Chain Gang.’’

Occasionally, as with “The Ladykillers,’’ the Coens enjoy stepping out of the shadows to honor particular films in skewed detail. “True Grit,’’ which featured an eye patch-wearing Wayne and a hardheaded teenage girl out to avenge her father’s murder, seems like a strange fit for the filmmaking brothers. The original is too strait-laced, too much a product of the stodgy Hollywood still emitting its dying breaths in the late 1960s, to appear relevant for 2010. Perhaps, though, that is just what attracts the Coens to exhuming the corpse of “True Grit,’’ and by extension, the traditional western. For what calls out for subversion more thoroughly, more desperately, than mediocrity?