Steven Lisberger, creator of the 1982 original, handed down his vision to a team of filmmakers armed with the technology to bring a sequel to life 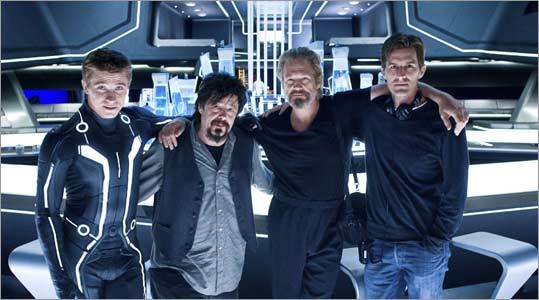 The world of “Tron’’ has evolved a bit in the 28 years between the release of Jeff Bridges’s original outing as Kevin Flynn, a video game designer teleported into cyberspace, and “Tron: Legacy,’’ the ubiquitous sequel opening Friday. Most obvious is the visual upgrade we’re getting on the blocky computer animation of the first film, at the time so cutting-edge that many didn’t know what to make of it — and didn’t buy tickets. Now, when Flynn’s adult son, Sam (Garrett Hedlund), follows his long-lost dad onto “the Grid,’’ he encounters a 3-D rendered digital realm in which the gamer-geared, neon-streaked “lightcycle’’ races and gladiatorial games feel a whole lot closer to real.

“Tron’’ has also morphed from an initially underappreciated title filed away in the cult corner of the vault to a $170 million event movie with full connectivity to today’s established, franchise-launching production and marketing machine. No surprise that some of the machinery is being operated by children of the ’80s who dug “Tron’’ enough to believe in its potential despite all those years in mothballs, not to mention a decade-long sequel-development slog. How relevant is computer animation now, they’ve asked? How relevant is Bridges, with that shiny new Oscar for “Crazy Heart’’ on his mantel? And how cool is that new wall-climbing, remote-controlled lightcycle toy? (Tron: Evolution, a video game bridging the saga, is also part of the blitz, as are “Tron’’-themed snowboard boots, boardshorts, sunglasses, and illuminated sneakers.)

Just as the medium and all that comes with it have changed, so has the message. Where the first movie ambitiously tried to imagine the future of computer culture, “Legacy’’ gets to comment on the here-and-now of a socially networked world. “The story of ‘Tron’ came true — we’re all living it,’’ says Steven Lisberger, a one-time Boston-based animator who directed the original and served as a producer on the sequel. “We’re all involved in cyberspace now, whether we want to be or not. So [‘Legacy’] is really holding up a mirror to reality.

“The aspect the new movie tends to focus on is how human relationships are affected by advancing technology,’’ he continues. “How is technology going to get between Flynn and his son?’’ One answer: the despotism of the elder Flynn’s rogue-program avatar, Clu — also played by Bridges, digitally made over to look as he did three decades ago. (This is the latest version of a scanning process previously used to age Brad Pitt for “The Curious Case of Benjamin Button.’’ Suddenly, Flynn’s importation to the Grid via laser-scan back in ’82 doesn’t seem quite so far-fetched.)

To hear the filmmakers tell it, the established history of “Tron’’ helped them differentiate “Legacy’’ from “The Matrix’’ and other screen dystopias about human connection growing more tenuous, and artificial worlds effectively swallowing our own. “We liked the idea of approaching those themes through the context of a father-son relationship, rather than attacking them head on,’’ Joseph Kosinski, the first-time feature director entrusted with the sequel, says during a recent press conference. “I didn’t want this to be a movie about the Internet or about technology specifically. [Approaching] it through the eyes of a very unique relationship between a father and his two sons — his digital son and his biological son — allowed us to tell a story that I don’t think has been told before.’’

Lisberger knows all about meeting that particular challenge. Back in the mid-’70s, just out of the School of the Museum of Fine Arts in Boston, he aspired to do work patterned on a guerrilla-filmmaking business model: original, creatively driven, corporately unfettered. He founded Lisberger Studios in a Downtown Crossing loft furnished with scavenged work tables, and pulled together a crew of half a dozen artists. Among the group was Roger Allers, who would go on to direct “The Lion King,’’ and Reading native John Norton, today an animator on features like “Cloudy With a Chance of Meatballs.’’ “I had this dream that we were going to be a little Walt Disney, and they would be my Nine Old Men,’’ Lisberger, 59, remembers, speaking by phone from his home in Los Angeles.

The studio took on a variety of work to make a go of things, from Boston Pops TV openers to public service announcements with Mass Electric spokestoon Lester Lightbulb to segments for “Sesame Street’’ and other educational programming. “I spent the Blizzard of ’78 animating the first Bubblicious ad while we were snowed in,’’ Allers recalls. “Steve was [the video reference for] the kid blowing the bubble in the first part of the commercial.’’ Still, Lisberger says, for all the hang-loose creative fun the group had, “there was a sense that this was not sustainable, and that we were going to have to grow or die.’’ And so he increasingly devoted his energy to a potentially more lucrative passion project: “Animalympics,’’ cartoon specials that would tie in to the 1980 Olympics in Moscow and Lake Placid.

As it turned out, the studio’s commercial work and “Animalympics’’ both helped plant the cyberseeds for “Tron.’’ Lisberger was looking for a signature character to feature in animated TV spots for local rock station WCOZ 94.5 and other outlets, as well as in a studio tag that could run with “Animalympics.’’ The crew was excited at the time about a new backlighting technique that rendered animation with a pulsating glow, so Norton used this to doodle an “electronic warrior’’ — syllabic emphasis on the “tron.’’ (The original finished clip is preserved these days as a YouTube posting under Lisberger Studios.) “The tagline on the first commercial was ‘The Music Is the Force,’ ’’ Norton remembers. “I think ‘Star Wars’ had had a huge impact on Steve, not only visually, but also in inspiring the thought that you could write and direct your own movie. But there was no clear sense that those early spots would turn into what they did.’’

Lisberger continued to toy with the concept after successfully pitching “Animalympics’’ to NBC, necessitating the studio’s relocation to LA and its bigger pool of animators. Eventually, a plan developed to use the cash infusion from the cartoon to set up “Tron’’ as an independent, fully animated feature. And then came the US Olympic boycott — “which Jimmy Carter now regrets, but not as much as I do,’’ Lisberger says with characteristic laconic wit. Work on “Animalympics’’ was curtailed, along with the paychecks. With financing “Tron’’ no longer an option, Lisberger ended up selling the creative blueprint for the project — and, in essence, the studio — to Disney.

The movie was reconceived as a hybrid of live-action and animation, with artists overseas hand-painting the electronic-warrior luminescence onto footage of actors in bodysuits. (“Now you read that all of those lighting elements are actually physically built into people’s costumes in the new movie,’’ Allers marvels. “Shows you how far technology has come.’’) For all the ways the creative rejiggering might have ultimately come together, it didn’t translate into blockbuster business in a summer ruled by “E.T.’’ “The biggest regret I have about the first ‘Tron’ not being more successful is that it didn’t enable the group from Boston to go on together,’’ Lisberger says. “Who knows what we could have accomplished?’’

As for the group that worked on “Legacy,’’ Lisberger talks often about how much he enjoyed helping them along in his “Obi-Wan role’’ — but he also acknowledges being continually reminded how much times had changed. “When we did the first film, we really were flying blind with this crazy sort of ’60s energy,’’ he says. “You had to commit to graphics and effects that wouldn’t come through for weeks.

“The new team was so professional, so determined to be ahead of the game, I thought, these guys don’t know what they’re letting themselves in for,’’ he continues. “But then I’d see Joe [Kosinski] on the set with his laptop, and his iPad, and five screens in front of him, and three people looking at other screens having to do with 3-D, just feeding him all this data in real time. I realized that these guys were perfect to make ‘Tron: Legacy,’ because they’re the digital natives ‘Tron’ was always talking about. It was a nice irony.’’

A scene from "The Fight Club."

Survey: What's your favorite movie with a cult following?