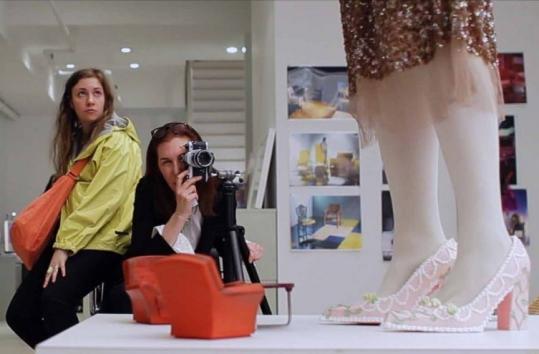 Every couple of years, the movies toss up a new wunderkind — some brilliant Visual Studies toddler who sells his grandma and maxes out his credit cards to make a movie that changes everything, at least for a few months. Sometimes these filmmakers are never heard from again. (Jonathan Caouette of “Tarnation,’’ where are you?) Sometimes the movie is “Pi’’ and they turn out to be Darren Aronofsky.

Dunham has been justly praised for her determination in getting “Tiny Furniture’’ made, but the movie itself has been overpraised as a result. What it is is a pretty good start — a confident first step away from the world of conceptual YouTube videos to the larger challenges of character interaction, long-form narrative, and the subtleties of meaning they bring.

Better yet, Dunham has wit. The filmmaker herself plays Aura, freshly graduated from Oberlin and crash-landing at her mother’s gleaming SoHo loft. What used to be home base is now hostile territory. Her bratty award-winning poet of a teenage sister (Grace Dunham, a natural) has taken over Aura’s bedroom as a “special space.’’ When Aura asks where the light bulbs are, she’s told “in the white cabinet,’’ which means less than nothing since the whole place is white cabinets.

The mom, Siri, is a celebrated art photographer (as is the woman playing her, Laurie Simmons). Dad is not seen, mentioned, or even evident — “Tiny Furniture’’ is concerned with estrogen-based power struggles and the only men in sight are an arrogant bum of a video artist (actor-director Alex Karpovsky), who crashes at the loft without even making a play for Aura, and Keith (David Call), a cynical sous chef who’s hot bad news.

Dunham is more concerned with how a girl without purpose can fare in a world of fierce, focused women. That includes Aura’s mother, who’s loving and distracted (she photographs doll furniture with eerie psychological subtexts, giving the film its name), and Aura’s reclaimed childhood friend Charlotte (Jemima Kirke), one of those downtown darlings who speaks in an indeterminate British accent. Charlotte becomes Aura’s companion in self-destructive behavior, but only Charlotte is able to make it look chic.

The heroine’s shapelessness extends to her own body, which Dunham refreshingly views with something between honesty and masochism. Aura’s a lump — to the point where she takes off her pants to scare her sister’s hard-partying friends out of the loft — and she becomes lumpier as the movie progresses, the borders of her self-esteem melting away until all she wants to do is dissolve into her mother’s bed.

Well, many of us have been here — that first flush of post-college terror, remember? — and Dunham makes it funny and involving before entropy kicks in at the two-thirds mark. (The male analogue to “Tiny Furniture,’’ Azazel Jacob’s “Momma’s Man,’’ kept it up for an entire movie.) Entropy’s the point, but it takes a seasoned filmmaker to structure drift for the long haul. With HBO hiring her to write and direct a series, Dunham’s short-term future is assured, but it’d be nice to think she’ll come back to film with more to say and sharper ways of saying it. Watch this space.