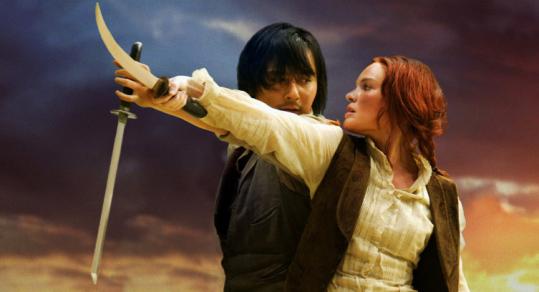 And here the fanboys were thinking they’d have to wait for “Cowboys & Aliens’’ to see some preposterously hybridized western action. Turns out ninjas also spent some time on the frontier, at least in the stylized re-creation cooked up in “The Warrior’s Way’’ by first-time filmmaker Sngmoo Lee and Korean star Jang Dong Gun (“Tae Guk Gi: The Brotherhood of War’’). Jang is cast in dialogue-lite mode as Yang, the top assassin in a martial clan whose name, the Sad Flutes, refers to the sound their targets make after getting their throats sliced.

Cold stuff — but when Yang shows enough warmth to spare the life of a baby, the lone survivor of his clan’s sworn enemies, he’s targeted by his own people and forced into hiding. Yang and the baby land in a dusty American outpost called Lode, less for any logical reason than because mash-up junkies might pay to watch when Yang inevitably clashes with outlaws and his estranged ninja brothers.

Lee collaborated on the movie with a producer from “The Lord of the Rings,’’ shooting the project on a New Zealand soundstage against hyper-stylized green-screen backgrounds. In publicity write-ups, the filmmakers seem eager to draw comparisons to “300,’’ and it’s not a big reach. There’s definite zing to violent flourishes like Yang leaving a slow-mo trail of arterial mist in his wake, or attacking gunslingers through a dynamite-triggered haze, with only the ring of his blade and the gurgles of victims hinting he’s there.

Picture “300’’ striving for a whimsical second act, though, and you’ll understand where “Warrior’s Way’’ goes wrong for a long stretch. Lode might look like a ghost town, but it’s bustling with a host of characters and caricatures. There’s the spunky tomboy (Kate Bosworth, “Superman Returns’’), the boozy layabout (Geoffrey Rush, repurposing his “Pirates of the Caribbean’’ saltiness), and even, ugh, a displaced circus troupe led by ringmaster Eight-Ball (Tony Cox, Billy Bob Thornton’s “Bad Santa’’ sidekick). The only genuinely amusing bits skew dark, particularly Danny Huston’s terrifically squirmy scene-chewing as a rogue Civil War colonel terrorizing the town with his volatility and fetish for gals with good teeth.

While the movie seems designed to be a breakout for Jang, it’s Lee whose work actually makes an impression. You guess he’ll be back — hopefully, playing it straight next time.

Written and directed by: Sngmoo Lee