A close look at a barrier to Israeli-Palestinian dialogue 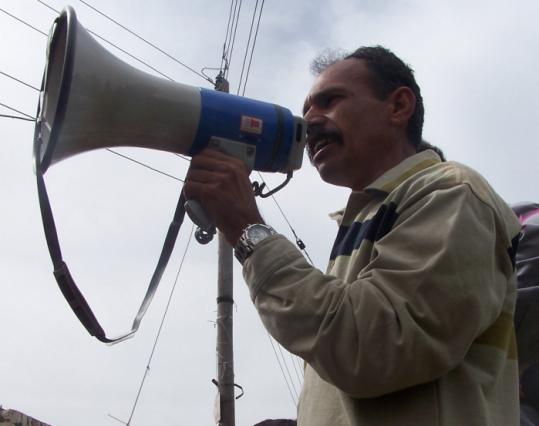 In Julia Bacha’s documentary “Budrus,’’ a stolid Israeli Army spokesman named Doron Spielman describes his country’s protective separation barrier as a “fence.’’ A lot of reporting on the barrier describes it that way, either out of carelessness or simply as a synonym for everything else the barrier is. But “fence’’ is a neighborly word. It’s benign. The partition the movie captures is more hostile than that. Bacha focuses on the section that cut off six occupied Palestinian villages from the rest of the West Bank, one 1,500-person enclave in particular: Budrus.

The installation of the Budrus section of the barrier, which began in 2003, threatened to demolish 3,000 cash-crop olive trees. It also threatened to tear through a cemetery and stand within kickball distance of a schoolhouse. Fed up, Ayed Morrar, a community organizer and family man, decided to organize peaceful demonstrations, which, using gathered footage, the film watches him assemble and enact. Violence, he says more or less, is what the Israelis expect from Palestinians so he holds rallies instead. The rallies unite the town — a schoolteacher and Hamas member, Ahmed Awwad, helps Morrar — and attract international attention.

The nonviolence culminates, nonetheless, in a melee. Intrepid, fully covered Arab women whack at Israeli soldiers. A soldier manages to slap a woman without losing the cigarette in his mouth. The village becomes a war zone.

“Budrus’’ is haphazard. Uncertain which approach to use, the filmmakers try a little of everything: sit-down interviews, in-the-moment footage, sentimental close-ups. A patient, on-the-ground approach would mostly have sufficed. But the movie is fascinating anyway. Once Morrar’s resistance attracts Israeli supporters, the soldiers are in the awkward position of having to club and arrest their countrymen. Bacha provides nightly-news footage of the deputy defense minister telling an anchor that Israelis protesting the barrier alongside Arabs should be put on trial.

The Israeli-Palestinian conflict is maddening and depressing and surreal. It could end at any moment yet never does. And this movie captures the grass-roots entrenchment that makes rapprochement seem so difficult. It faults Israel. (Bacha’s big get on that front is a former soldier, a woman, whom both her Israeli comrades and the Arab women taunt. Her situation is a movie unto itself.) Obviously, the conflict and its history are far more complicated than that. Budrus is a microcosm of Palestine, not Palestine itself.

But all you can think about while watching “Budrus’’ is that wall. It’s fence-y in sections, sure. (The two-foot clouds of wire that seem to hover above it give the land on either side a penitentiary feel.) It’s concrete slabs in others — brutalism in want of a more inspired architectural calling. Which is to say it’s ugly. Its physical awfulness would breed contempt for anyone who’d erect such an eyesore in a backyard, an olive grove, or a cemetery.

The movie ends with a silver lining. But even that has tarnish. The barriers are moved. But, alas, they’re still there.

CORRECTION: An earlier version of this review misstated the years the film was shot. The years were 2003 and 2004. The review also mischaracterizes the extent of the damage the Israeli separation barrier caused. It destroyed some of the village's olive trees but only threatened to demolish 3000 of them was and was almost in view of a schoolhouse.

In Hebrew and Arabic, with English subtitles