There’s solidarity among sisters, but no surprises 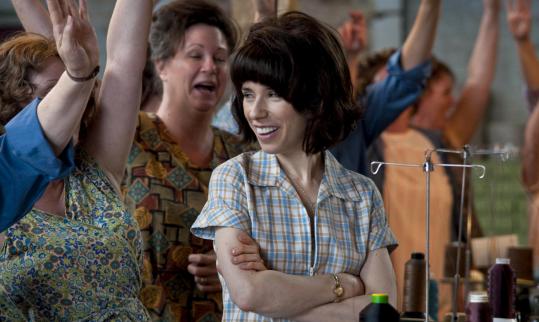 ‘Made in Dagenham’’ is an art-house crowd-pleaser — a piece of topical toffee that’s entertaining, well cast, and predictable every step of the way. The subject is a 1968 strike by 187 female workers at the assembly plant in the London suburb of Dagenham, a three-week walkout that pitted the women against management, their union, and often their own husbands and boyfriends. And it was a success: In 1970, Parliament passed the Equal Pay Act, ending wage discrimination between men and women.

You can guess the kind of tough, unyielding film a firebrand like Ken Loach (“The Wind That Shakes the Barley’’) would make of this story, and it’s easy to see where “Dagenham’’ leans on borrowed “Norma Rae’’-isms. But director Nigel Cole has made his name with films like “Saving Grace’’ and “Calendar Girls,’’ cheeky comedies in which well-behaved British ladies rattle the teacups by growing pot or posing in the nude.

It falls to Sally Hawkins, the motormouth optimist of “Happy-Go-Lucky,’’ to bring their leader to life, which she does without breaking much of a sweat. Rita O’Grady is one of the gang when “Made in Dagenham’’ begins, sewing automobile seat-cushions in a workroom with a leaky roof and no air conditioning; the women cheerfully strip down to their skivvies on hot days. Their designated spokesman, Connie (Geraldine James), is an older woman averse to conflict, and shop steward Albert (Bob Hoskins in fine fettle) needs someone from the ranks. He chooses Rita, and Rita, to her shock, chooses to speak up.

The scene in which she does so — a meeting with management in which the ladies are supposed to sit quietly by while the men do the talking — is delicious, as much for the appalled look on the doughy old unionists’ faces as for Rita’s gathering righteousness. William Ivory’s script makes the essential point that the women had to separate their own dispute early on, since the men just weren’t interested. “Dagenham’’ builds slowly to a pitch of emotional conviction: a national union convention at which Rita shames her audience with the simple facts of the matter.

The movie makes sure she’s supported on all sides by a sisterhood unbounded by class. One of the script’s more far-fetched inventions is the friendship between Rita and Lisa (Rosamund Pike), the willowy, Oxford-educated wife of the plant’s young manager (Rupert Graves). Yet if the friendship seems unlikely, Lisa gets the film’s strongest scene when she tearfully describes the Barbie-doll life her husband expects her to lead. As Barbara Castle, the frosty Secretary of State for Employment, Miranda Richardson gets the biggest laughs by cowing male minions and forging a connection with the striking women over tea (and a little Scotch).

If only “Made in Dagenham’’ didn’t roll along such pat dramatic tracks. Cole directs the film with such conventional storytelling beats that you can tell how each scene will end moments after it has begun. When he holds a camera shot on one of the husbands a second too long, you know that tragedy will arrive on schedule, and so it does. (The man behind me at the screening even guessed the method of demise — good show!) Why is Hoskins’s Albert so empathetic to the strikers? Here comes the monologue about his sainted mum to explain it all.

The movie moves, but it doesn’t breathe. The period details are pleasing down to the Mary Quant hot pants and the Desmond Dekker hits on the soundtrack, and it all feels precisely engineered for our comfort. “Made in Dagenham’’ is a feel-good movie about women who felt so bad they had to strike out. It celebrates their grit and their triumph at the expense of their fury.