Read the list of possible side effects first: can feel potent and pretty 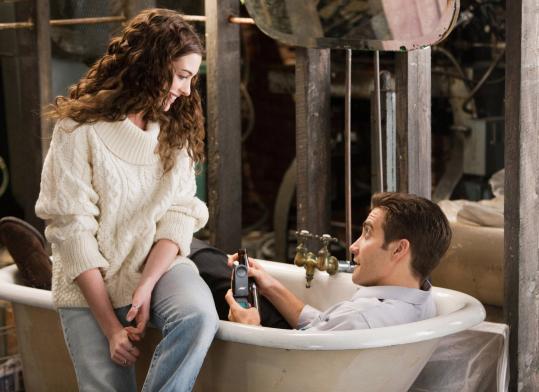 WARNING: Prolonged exposure to “Love & Other Drugs,’’ a romantic comedy-drama about the ups and downs of high-powered pharmaceutical salesman Jamie Randall (Jake Gyllenhaal), may result in the following side effects: Overwhelming sensations of slickness, loss of taste and other critical faculties, waxy plot buildup, severe supporting-character blockage, terminal-heroine syndrome, and impacted chick-flick cliches. Constipation and brain death may ensue.

ADVANTAGES: When used as directed, this product has three primary benefits that may offset the above conditions. Chief among these is Anne Hathaway in the role of Maggie Murdoch, a Pittsburgh free spirit living with stage one Parkinson’s disease. Unlike previous sufferers of Unspecified Movie Wasting Syndrome (also known as MacGraw’s Blight, after the star of “Love Story’’), Maggie has a diagnosis and symptoms, both of which anchor the character in medical reality and allow the actress to create an unexpectedly moving portrait of a young woman coming to terms with infirmity and looming death.

A key component in the efficacy of this ingredient is an organic enzyme known as “star quality,’’ which to date has proven resistant to synthesis in the lab. The chief hallmark is an indefinable glow: Hathaway has it. The complexity of this compound can even be isolated in a single close-up, in a bus-stop scene in which Maggie realizes Jamie is ready to commit, whereupon any number of unidentifiable emotions flicker across her face, including but not limited to: fear. Possible audience reactions may include the minor myocardial infarction known as heartbreak.

A secondary benefit of this product may lie in reminding the user of Gyllenhaal’s qualities as a gifted and inventive actor despite A) chronic underappreciation by many members of the moviegoing public and, indeed, the author of this medical journal, and B) a role that has many of the elements of the now-discredited steroidal stimulant known as Tom Cruise: endemic cockiness followed by third-act comeuppance, humbling romantic speeches, uncontrolled grinning, etc.

Thirdly, the aphrodisiacal nature of the product should not be discounted, inasmuch as it may have post-screening utility. Where most romantic comedies sold by major Hollywood drug companies advertise sex without actually including it as an ingredient (see the author’s monograph, “The Placebo Effect in the Films of Katherine Heigl’’), “Love & Other Drugs’’ allows Maggie and Jamie to fall in bed and reluctantly in love with a refreshingly relaxed depiction of nudity and physical pleasure. Users experiencing shock at characters and actors feeling comfortable in their own skins may need reminding that consenting adults who are attracted to each other often do, in fact, have sex. With their clothes off.

KNOWN DRAWBACKS: Inactive ingredients include Oliver Platt as Jamie’s sclerotic sales mentor, Hank Azaria as a horndog doctor, Judy Greer as a naive hospital administrator, Gabriel Macht as the hero’s Prozac-selling rival, and Jill Clayburgh, now sadly discontinued and available here only in trace amounts as Jamie’s mother. Such components, effective if used in small doses, cancel each other out when deployed en masse. The use of such generics as Josh Gad, an off-brand Jonah Hill, as Jamie’s fat, crass brother, may result in feelings of repulsion and suicidal despair. Aside from Hathaway’s, all female roles are generics.

The failure of this product to fully work as advertised can be attributed to its reliance on slow-release particles of dramatic cliche. Patients who have built up normal immunities over time may experience cynicism, mild nausea, and cramping; in more romantically-inclined users, the product may nevertheless perform as expected. The latter should avoid operating heavy machinery.

More problematically, Edward Zwick Labs, makers of such over-the-counter products as “thirtysomething,’’ “Glory,’’ and “The Last Samurai,’’ has engineered “Love & Other Drugs’’ to appear to attack the cancer of late 1990s Big Pharma, when go-go sales conventions touted the miracle healing powers of Xanax and Viagra and morally compromised the medical community. However, this beneficial purpose turns out to be a masking effect for the product’s actual use as a purely recreational drug.

IN SUM: No genuine ideas were wasted in its making. If product proves especially difficult to swallow, take with a grain of salt and three or more alcoholic drinks, or wait until such time as active ingredients Hathaway and Gyllenhaal have been more effectively utilized elsewhere.

Written by: Zwick, Marshall Herskovitz, Charles Randolph, based on a book by Jamie Reidy