A special kind of love, at an Indian restaurant 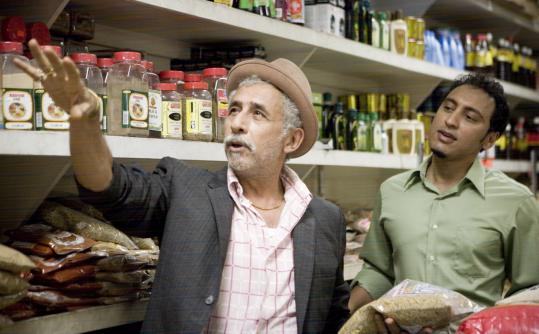 The only thing more worth rooting for at the movies than love, justice, or revenge is food. As predictable as the outcome is, you really want chefs and restaurants to make it. If you see a good meal in a movie, it makes you hungry more than good screen sex makes you horny. More than once during “Today’s Special,’’ a modest but extremely enjoyable movie that opens today, I thought about how many food movies are romantic comedies in their own right. This one, like most food movies, affixes a budding heterosexual relationship. Even though it’s just right, it’s also redundant since, really, “Today’s Special’’ is a comedy of remarriage.

Samir (Aasif Mandvi) is a sous-chef at a good Manhattan restaurant. When he’s passed over for a shot at running a new restaurant, the executive chef who overlooked him explains that Samir doesn’t cook with the soul required for the job. Dejected, he quits and plans to cook in Paris. Then life intervenes. His father (Harish Patel) has a heart attack and puts Samir in charge of his restaurant, a little place in Jackson Heights, Queens, crammed between a beauty supply store and a kebab house.

The dining room is shabby. The kitchen is a sty. The few customers find the greasy food disgusting. Eventually, Samir reluctantly hires Akbar (Naseeruddin Shah), a free-spirit cabdriver who claims he once cooked for Indira Gandhi. Akbar is a godsend for Samir: His food amazes, his unruly technique educates. Shah is a bonus for the movie. This smooth, self-confident, inarguably sexy veteran actor doesn’t steal the film so much as wrap it around his finger.

With Akbar in the kitchen, things start looking up. Samir’s snobbery — part familial, part cultural — recedes, and the smart, blond cook (Jess Weixler) he likes helps open his mind a little further. He and dad even stop bickering and start doing morning prayers together.

No, I don’t believe that a man as concerned with appearances as Samir’s father appears to be — let alone a man played by Patel — would allow a business to fall into such disrepair. Nor do I believe that a man married (also as Samir’s father is) to a woman played by Madhur Jaffrey would be permitted to operate such an unsanitary kitchen. The sight of one of the world’s most regal women and beloved cooks standing in such filth is wrong, wrong, wrong.

But we’ve put up with less plausible stuff in more conventional romantic comedies. “Today’s Special’’ gets by on little cultural details that also seem personal, like Samir’s mother fixating on his finding an Indian wife. Amazingly, she doesn’t overdo it. I’m not even sure she cares that much; it’s just something to keep her busy.

Mandvi co-wrote the movie with Jonathan Bines. David Kaplan directed it. On “The Daily Show,’’ Mandvi affects the put-on nincompoop air that works for the show’s satire. Here, his aggrieved carriage makes real-world sense. He’s resistant to the restaurant (and all that succumbing to it means) until he can resist no longer. Then, it’s love.