‘Jackass’ makes a splash in 3-D 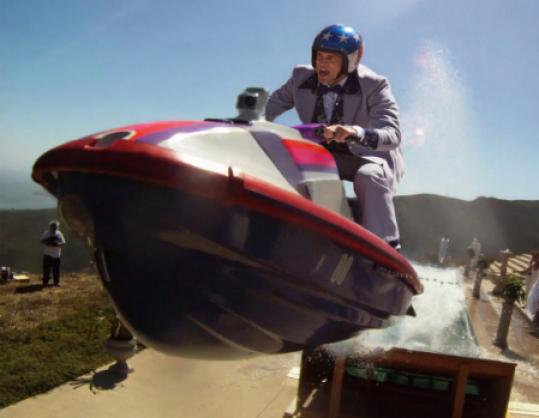 James Cameron has lamented that a drawback of the resurgence of 3-D technology is that too many movies exploit it and too few explore it. I would urge him to head to “Jackass 3D.’’ His spleen might be blown, and, perhaps, his mind. This is the only live-action movie to expand the bounds of the format since “Avatar,’’ and in saying so, I know what you’re thinking. The gulf is wide between flying iguana people and a filthy flying port-a-potty. Neither is anything I had seen before.

Utilizing 3-D is an obvious frontier for “Jackass.’’ The closer it can bring us to secretions, high-impact mishaps, ornery farm animals, and flaccid penises the better. What’s astonishing is that the movie is not a half-baked production. The spectacle now looks spectacular. Much of it was filmed in high-definition video and on several occasions, namely its fabulously combustive bookends, in digital 3-D. The care applied to several of these sequences would have made me cry were I not already laughing while suppressing the urge to vomit. When a prosthetic sex toy flies, in the slowest possible motion, through several different sets and through a glass of milk, the low speed and high definition invite you to savor both the ludicrousness and physics of the stunt until it begins to approach the sensory power of some art.

The television show, its spinoffs, and two previous films have sought to farcify both the ecstasy and agony of stunt work. Within the legacies of Charlie Chaplin, Mack Sennett, Buster Keaton, and, especially, the Three Stooges, the men of “Jackass’’ have either located, extracted, or installed an element of sport: Extremely physical comedy with homosexual tendencies.

This is a bodily enterprise whose best responses tend to be involuntarily sublingual: howl, groan, howl. Led by Johnny Knoxville, the project’s jesters have been at this since the mid-1990s. And judging from their willingness to put on jailhouse stripes and complete an obstacle course rigged with stun guns and the paroxysms of laughter as they stand around a writhing comrade, they’ve lost none of their enthusiasm for their work. Part of what’s so funny is how hilarious these guys find their pranks. Which is to say, that it’s masturbatory, but generously so.

Like Cameron, the “Jackass’’ crew — Jeff Tremaine has directed just about everything “Jackass’’-related — understands that what’s compelling about 3-D is not what it sprays or rubs in your face, but how expanding the depth of field enhances that splendor of the spraying. At a late stage, urine cascades through the air. As it arcs up then down onto an unsuspecting bystander — always a member of the gang, never you, never me — what’s apparent in its trajectory is the crisp beauty of the stream. Light reflects off the droplets. The hang time is Jordanesque. Meanwhile, the rumpled hose that does the spouting occupies a sizable portion of the left side of the screen. At such a swollen size, it’s more like a giant leaky slug than a human penis, and, though it belongs to the small, floridly tattooed Bam Margera, it and its contents are treated as lovingly as Michelangelo treated David’s.