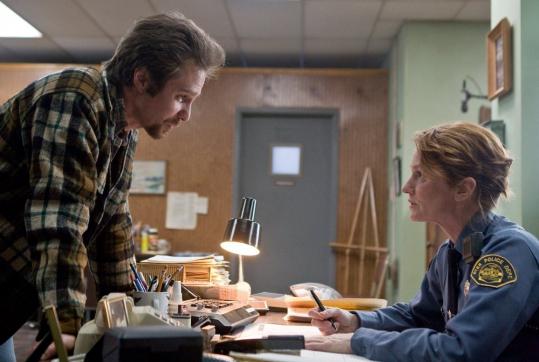 “I want to see somebody go through something,’’ says actor Sam Rockwell. “I like characters that have a journey.’’ In “Conviction,’’ Rockwell (with Melissa Leo) portrays a man imprisoned for murder and later exonerated with his sister’s help. (Ron Batzdorff)
By Farah Stockman Globe Staff / October 10, 2010

As compelling as its true-crime story is, especially in New England, a lot of the early buzz around “Conviction’’ has centered on Sam Rockwell’s performance as Kenny Waters, the man imprisoned for murder and later exonerated with the help of his devoted sister, Betty Anne (played by Hilary Swank).

In town recently to promote his latest film, the veteran actor answered a few questions about the role that some think might earn him an Academy Award nomination.

Q. At last night’s screening, you said you just wanted people to be entertained and moved. Some people see this film as a piece of advocacy. You clearly don’t see it that way; why not?

A. I would love for this to help people out, but at the same time, it’s just a movie. We have to show a little humility here, and we just want to make a good movie and entertain people. It would be really great if it would help get innocent people out of prison. We’ll see what happens. It is a true story, and it’s pretty incredible what Betty Anne did. Hopefully it will bring some attention to the Innocence Project, because they need more money and they need more help.

Q. How much did you research Kenny’s life for this role?

A. “In the Belly of the Beast.’’ I read that while we were filming. That was very helpful. That guy [author and prison inmate Jack Henry Abbott] was not innocent. He had fascinating descriptions. I saw some videotapes, of [Kenny] and Betty Anne walking around. We spent a full weekend hanging out in Bristol and driving through Ayer, drinking beer with [Betty Anne’s] sons. Jackie, her brother, told me some prison stories. I did some research [on prisons] for “The Green Mile.’’ I had a couple friends in prison. I listened to tapes of him talking to his lawyer. You put it all together, like a stew.

Q. What do you think it is about your own history that has cast you in this mold?

A. I am kind of bored with regular, kind of average people. I don’t know if I am so drawn to the yuppies. I want to see somebody go through something. I like characters that have a journey. . . . I went to high school in San Francisco. It was eclectic. There were rich kids who came to the school of the arts. There were middle-class kids like me. My dad and I were sort of broke. He was an actor, then became a union organizer.

Q. It seems like the movie is an anthem for the white working class.

A. It’s a little more universal. Everybody kind of relates to it.

Q. Was it hard to play a real guy?

A. It’s a little bit of a responsibility. I did it in “Frost /Nixon’’ and “Confessions of a Dangerous Mind.’’ Those guys were alive. You just do the best you can. Sometimes you are around the real person a lot. Hilary had that luxury with Betty Anne.

Q. Did playing him change the way you looked at the world?

A. I don’t know enough about the legal system to talk about it. I can say that prison sounds like a really awful [expletive] place to be. I visited my friend Tony in the county jail years ago, just to say hi to him. I think he graduated to San Quentin. I would like to look him up. . . . It’s a whole other culture. It’s really intense.

Q. When Hollywood comes knocking on an ordinary person’s door, what happens?

A. It depends on the person. [Betty Anne] is pretty grounded. Fame, especially in this country, is pretty fickle. That’s why they call it heat; it cools down. If you need it, you are probably going to be up [expletive]’s creek. It ebbs and flows. She is awesome. Her sons are awesome. She has got her feet on the ground. She knows that Kenny really wanted the movie to be made. He really wanted it to be celebrated.