He's on the hunt for lost movie treasures 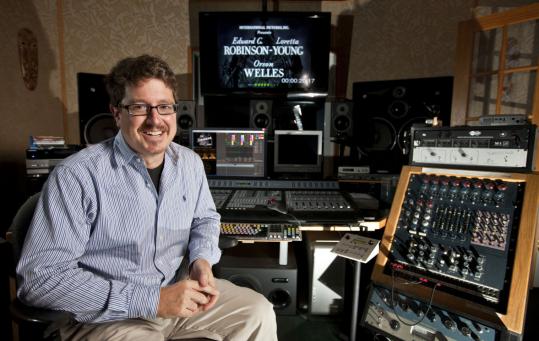 Film Chest co-owner Philip Hopkins at engineer John Keegan’s Gloucester studio, where he restores classic films for re-release. The company’s clients include TCM and AMC, for which they do “detective work’’ finding lost movies, or lost scenes from movies. (Aram Boghosian for The Boston Globe)
By Gerald Peary Globe Correspondent / October 10, 2010

“We are an archive specializing in films thrown away,’’ says Philip Hopkins, co-owner of Film Chest in Rockport. “Our film library, three or four thousand films, comes out of attics, suitcases, the backs of closets. We’ll jump in a van, a plane. We are the Indiana Jones of film-finding.’’

Film Chest was started in 2000 by Hopkins, a devotee of old movies, with Ralph Stevens, a business partner. Their credo is to go anywhere on earth for unwanted 16mm and 35mm films, then store what they purchase in a temperature-controlled vault (65 degrees Fahrenheit, 50 percent relative humidity) in Bridgeport, Conn. When there are no copyright issues, the films are restored, and, these days, converted to HD video. Orson Welles’s “The Stranger’’ is their newest HD release, made feasible because the RKO picture has fallen into public domain. Film Chest’s next major restoration is another Hollywood picture for which copyright protections have ended: “Kansas City Confidential’’ (1952), a tough little heist noir from cult director Phil Karlson.

“We span from Oscar films to curios and cult films,’’ Hopkins says. “Sometimes a company goes bankrupt, sometimes a filmmaker holds rights to his films. We have the Bill Rebane canon. He lives in Saxon, Wis., and he’s a good friend, an iconic filmmaker in the way of Roger Corman. We’re working on his ‘The Giant Spider Invasion’ [1975] and ‘Monster a-Go Go’ [1965], which some consider the worst movie ever made.’’ Hopkins says he expects to release “Monster a-Go Go’’ sometime in the next several weeks, with a director’s commentary, a 24-page booklet, and two previously unreleased short films by Rebane.

Hopkins is especially proud of one rescue that happened in 2008, when films were saved (“days from being in the dumpster, he says’’) from the library of Elvin Feltner, a legendary West Palm Beach, Fla., collector. The Film Chest restoration team found a collection so damaged by improper storage that 60 percent of it had to be thrown away. But among the remains was a feature produced by Feltner, Al Adamson’s “Carnival Magic’’ (1981). “It’s a weird movie, with a talking monkey and vivisection,’’ Hopkins says, “It will have its broadcast premiere on TCM.’’ In fact, TCM and AMC are two clients of Film Chest, for which they do “detective work’’ finding lost movies, or lost scenes from movies.

Given the far-reaching, artistically important endeavors at play, why hasn’t anyone in Massachusetts heard much of Philip Hopkins or his company? “For the past 10 years, I’ve been too busy going to trade shows around the world, and building our collection,’’ Hopkins answers. He plans to take time out to make an appearance at today’s screening of “The Stranger’’ in Rockport.