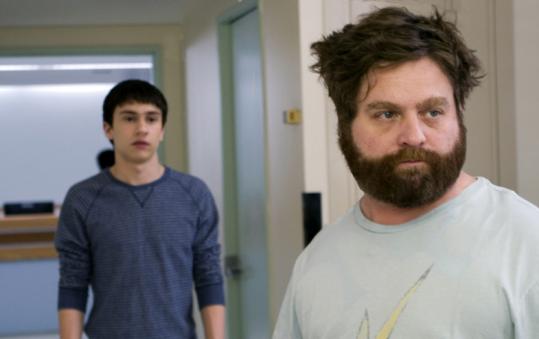 TORONTO — For most of the last 15 years, Zach Galifianakis earned his living doing stand-up in clubs and arenas where it’s hard to say what was the bigger draw: jokes or alcohol. So it’s sort of poetic, in a limerick kind of way, that this performer’s big break came when he did a little movie called “The Hangover.’’ Now he’s an “Oh, thaaat guy’’ brand of star — the kind whom mainstream audiences don’t necessarily know by name, but can identify pretty quickly when words like “bearded,’’ “fat,’’ “sophomoric,’’ and “sloppy’’ are tossed around.

In interviews, the person tossing those adjectives is usually Galifianakis.

For anyone who doesn’t know, this outrageously funny comic-actor is a 41-year-old North Carolina native who abandoned college one class shy of graduation and likes to end his stand-up act dressed as Little Orphan Annie. He played Dave the Bear in “What Happens in Vegas.’’ He’s also played char acters credited as Pathetic Guy (“Flushed’’), Weird Wally (“Below’’), and Homeless Man/Guy (“Zach & Avery of Fergus’’ and “Gigantic’’). On TV, his work ranges from vintage “Boston Common’’ to HBO’s clever “Bored to Death,’’ in which he plays a curmudgeonly cartoonist. “Saturday Night Live’’ fans still talk about the time he shaved off his beard mid-show.

Since “The Hangover,’’ Galifianakis has had appreciated but inconsequential roles in a number of movies, including “Youth in Revolt,’’ “Up in the Air,’’ and “Dinner for Schmucks.’’ With a “Hangover’’ sequel in the works, he might have chosen to lie low and occupy his time grilling fellow celebrities for the hilariously awkward video program “Between Two Ferns With Zach Galifianakis’’ on www.funnyordie.com.

Instead, he’s starring in two films being released this fall: “It’s Kind of a Funny Story,’’ opening Friday, and “Due Date,’’ due out Nov. 5. The first is a black comedy from writer-directors Ryan Fleck and Newton native Anna Boden (“Half Nelson’’), based on Ned Vizzini’s novel about a suicidal teenager (Keir Gilchrist) who meets a life-changing cast of characters when he checks himself into a mental hospital. The second, a road-trip comedy in which an expectant father races to make it to the birth of his baby, costars Robert Downey Jr. and Juliette Lewis.

Galifianakis spent some time promoting “Funny Story’’ during the recent Toronto International Film Festival, where the media circus can be especially tiresome. It wasn’t surprising to find him splayed on a hotel-room couch with one of the seat cushions pulled up behind his back and his sneakers dangling into the void. Rumpled chinos? Check. Pullover? Check. Scruffy beard? Check. The only things missing were a little hair of the dog, a tiger in the bathroom, and a baby in the closet.

A. Sorry, I’m in relaxing mode. I’ve been talking about myself so much that I’ve actually fallen asleep during my interviews. So don’t be surprised if I nod off.

A. Oh, my God. I catch myself sounding like I went to the Tisch School of the Arts.

Q. Well, feel free to do this interview more in the style of “Between Two Ferns.’’

Q. In the name of comedy, of course. Speaking of which, some year you’re having . . .

A. Yeah, it’s been pretty crazy as far as getting work. I got a little lucky and I’m pleased with how it’s all come about, but I would have been pleased if it didn’t, also. It’s kind of a double-edged sword because you get to work but then all of a sudden people want to ask you questions. No one wanted to ask me a question, ever. Now all of a sudden people want to ask me stuff and I’m like: I don’t know! I don’t know how or why I do stuff; I just do it!

A. This interview? Is it going to take that long?

Q. No, if the movie star thing ended tomorrow, would you be just as happy?

A. I like to get a rise out of people. I like watching their responses at screenings. But if it ended, you know, life goes on.

Q. Are you annoyed or flattered by comparisons to Belushi, Murray, etc.?

A. I’m flattered, but I don’t understand them. Those guys have mountains of work, especially Bill Murray. So it’s just unfair to Bill Murray to have my name come up. He’s a legend. And I was never a big Belushi watcher, but I do like what I’ve seen.

Q. Who were your comedy heroes?

A. I was first influenced by Shields and Yarnell. I remember watching them specifically because they did this robotic act and that turned something in me because I started copying them. But I grew up on Bill Cosby and I like “The Andy Griffith Show’’ a lot. I love Eddie Murphy. And David Letterman will always be the funniest person; I don’t even want to go on his show anymore because I just love him so much. It’s a weird thing. I love him so much I don’t want to talk to him, if that makes any sense.

Q. What attracted you to “It’s Kind of a Funny Story’’?

A. I’d seen the directors’ other [features], which I loved, and I really liked where this one took place: in a mental hospital. Also, it was a more grounded story; it wasn’t like an over-the-top comedy, which I’ve gravitated toward.

Q. How do you think your fan base will respond to it?

A. I don’t know if I have a fan base. I have some underground fans who are all comedy nerds and who do not like when you become mainstream. Then there’s the frat-boy “Hangover’’ fans, whom I heavily try to avoid. So, selfishly, I’m doing what turns me on, and hopefully people will like it. That’s all you can do.

Q. There’s been some online chatter about how you’d be a great replacement for Steve Carell on “The Office.’’ Is that anything you want, or is it a nonstarter because you have another TV show?

A. I do have another television show, but I didn’t know that was something people were talking about. I mean, I love “The Office.’’ Those would be heavy shoes to fill. That might freak me out. I don’t know what I think about that.

Q. Did your stand-up career help prepare you for acting in film?

A. What stand-up did for me is it gave me confidence. I stopped caring about what I thought people wanted and learned to let the audience follow you — you don’t cater to them. I guess I should care more about what people think, but it’s kind of helpful that I don’t.

A. Yeah, that movie is a pretty tried-and-true comedy formula where you take a guy who’s anal and a guy who’s a bit of an idiot and you put them together on a road trip. But it’s a lot more emotional of a movie than you would think. It actually has a very heartwarming through-line that you wouldn’t expect from a Todd Phillips movie. It was a lot of work, and Robert is a pretty intense guy — I couldn’t believe I was acting with this kind of legend guy — but I learned a lot from him and he was very gracious. It was a lot of laughs. And a few screams.

Q. Did you ever think you’d have this level of success?

A. It wasn’t really my goal to be like this — whatever this is. I just wanted to make a little bit of a living and not have to go to an office. It’s been very gradual. It’s 15 years.

A. Yeah, for me that probably was good because I probably have matured a little bit, hopefully. If I were 25 and this kind of thing had happened I might have believed the hype. Now, I’m too cynical to think that I’m that special. Also, my girlfriend’s not impressed with me, and I kind of surround myself with the opposite of sycophants. My friends all still insult me. The only thing that’s changed is there’s more people yelling stuff at me.

Q. What are they yelling?

A. It’s never good. It’s always “Hey, aren’t you the fat guy from ‘The Hangover’?’’ I don’t know why they have to put that part in there. You never win. People think this fame thing is a lot of fun; it sucks! But I wear headphones to ignore it. And even then, when you’re in a restaurant, people just sit down with you.

Q. They really do that? What do you do?

A. I try to be polite, But inside my head, I’m furious. I don’t know what you can say. . . . I’ve tried “I don’t speak English’’ with no accent. That doesn’t work. I’ve tried saying “I’m not that guy.’’ That doesn’t work. I’ve tried — oh God, this was the worst one — I was at a bar in Philadelphia and these people were bugging me, so I told them there was a death in my family and I didn’t want to be bothered. Oh God. I know: awful. And I’m sure they didn’t believe me. . . . I felt guilty and ended up telling my mom.

Janice Page can be reached at jpage@globe.com.