Another case of progeny for the devil 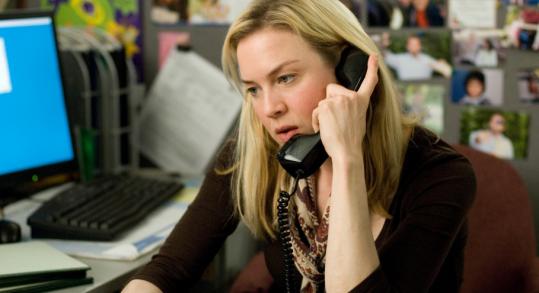 Renée Zellweger plays Emily Jenkins, a harried social worker in a big city trying to stay on top of her caseload. She lives alone. Each night she drives her Volvo home to her television and her fish tank. As in many other horror movies, all is unremarkable, until . . .

In one of many plot barriers that the stunt car of your disbelief must jump, Emily becomes the shell-shocked girl’s foster mother. Zellweger has already said, “I’m not mom material’’ — her own mom died when she was young — to which the girl replies, “How do you know if you’ve never tried?’’ This parental trial run seems to signal a heady theme.

But director Christian Alvart (“Antibodies’’) veers away from it as a series of creepy incidents unfold. For example, Emily’s co-worker Bradley Cooper (“The Hangover’’) succumbs to swarms of hornets crawling from his ears, mouth, and other orifices. People die gruesomely, according to their personal “idea of hell.’’

Is the girl not who she appears to be? Perhaps her name, Lilith, should have tipped off Zellweger. Or when she says, “I have bad thoughts.’’ It’s a bummer when the audience is smarter than the protagonist. After the first reel — or even watching the trailer — you’ll guess the girl is linked to the killings. Which leaves only one mystery: How will the devil spawn be stopped?

Like “Rosemary’s Baby’’ and the “Omen’’ and “Exorcist’’ movies, “Case 39’’ preys on a fear of parenthood. Does a poisoned psyche prevent you from being a good parent? What if you don’t love your children enough? If Lilith wants ice cream for supper, you better hop to it.

Introduce the supernatural, and anything goes. Here, everything does. And that’s a problem no one can solve.