Bunny and the Bull

Flashing back to a whimsical road trip 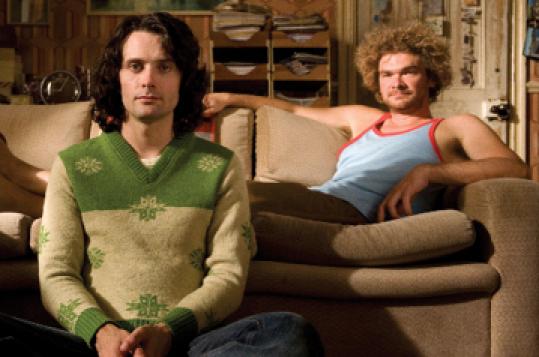 A typical strategy for cracking the windows on the inherent staleness of buddy road-trip movies is to pair actors on a roll — Robert Downey Jr. and Zach Galifianakis, say, or Jonah Hill and Russell Brand. With “Bunny and the Bull,’’ filmmaker Paul King tries something in keeping with his work on the British sitcom-for-stoners “The Mighty Boosh’’: a road trip recounted entirely in whimsical-looking flashbacks by a mopey young Londoner who never leaves his house.

Edward Hogg plays Stephen Turnbull, a fluttery-voiced sensitive guy who’s fallen into an obsessive-compulsive, agoraphobic funk that abates only when a stray photo or some other bit of shut-in flotsam starts him reminiscing. Rewind (and rewind again) to a year earlier, when Stephen is nursing a broken heart, and his kooky best mate, Bunny (Simon Farnaby), declares that it’s time for them to take a cross-continental holiday. For Stephen, traveling is all about boy-scout preparedness and hitting itinerary-mandated stops like the Museum of Spectacles in the Netherlands. For Bunny, it’s about getting drunk, getting lucky, and betting on anything: horses, swimming endurance, how many crabs he can snarf down at a suspect Polish seafood joint.

The pair find a buffer — and a wedge — in their amusingly foul-mouthed, prawn-costumed waitress, Eloisa (Verónica Echegui). Soon they’re driving her to a bullfighting festival back home in Spain, with Stephen shyly hoping that he’s found new love, and Bunny angling to play matador — in more ways than one. Poor, dissed Stephen is left with a taste about as sickening as the one he gets from dog milk he’s uproariously served by a tramp (“Boosh’’ trouper Julian Barratt) they meet along the way.

Hogg and Farnaby have some very funny interplay, but the dynamics of the characters’ friendship are thoroughly familiar. The original touches are in the semi-animated visuals, which do owe a bit to Michel Gondry but feel uniquely repurposed. When Stephen and Eloisa have a heart-to-heart, it’s atop a stalled Ferris wheel — but one made out of clockworks. A train interior is somehow a cheesy-props fusion of a Eurorail car and Stephen’s loo. You’ll read Freudian significance into some of these cinematic doodles; others seem incorporated just for fun.

Finally, though, the movie has to veer off its fantastical road to nowhere and focus on its destination — and characteristically, it’s easy to guess how things turn ugly. Same for the cause of Stephen’s not-so-unreadable malaise. It’s actually spelled out, in caps, right off the top.

BUNNY AND THE BULL