There’s no reason not to bury this gory ‘Hatchet’ 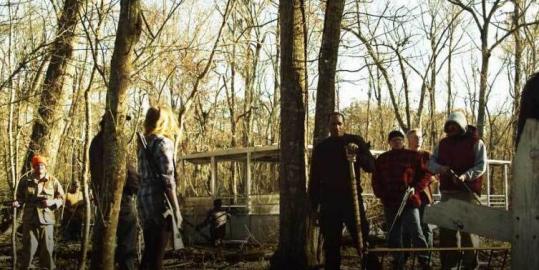 Danielle Harris leads a charge into the swamp to retrieve the bodies of her father and brother.
By Wesley Morris Globe Staff / October 1, 2010

Adam Green’s “Hatchet,’’ from 2006, was schlock with a few good comic flourishes and some bad ideas, including the door left cracked for “Hatchet II,’’ which opens today.

The first film wanted to be an old 1970s slasher movie while parodying what were, at the time, ripe targets, such as the drunken breast-baring of “Girls Gone Wild.’’ Eventually, the movie ditched gags for straight horror-movie clichés, but Green lacked the skill for useful suspense.

As an indication of the sequel’s priorities, the film’s website boasts that it’s being released with no MPAA rating. So if Victor Crowley, the movie’s deformed madman played by Kane Hodder, wants to strangle someone using the victim’s intestines, there’s nothing a censor can do. In the first movie, passengers on a haunted boat cruise tried to survive Crowley and only Marybeth (Danielle Harris) made it. And now this grubby-looking sequel is all hers.

Marybeth prevails upon the Reverend Zombie (Tony Todd), a voodoo man and con artist, who operated the cruise, to help her retrieve the bodies of her dead father and brother, whom Crowley killed. The reverend recruits a bunch of locals to venture with him and Marybeth into the swamp. The movie provides a labored explanation for Crowley’s killer urges (he’s a bastard mulatto who was burned alive). Despite having a curse placed on him, Crowley’s being such a brainless maniac makes only a little sense. But Hodder has played Jason Voorhees, during the “Friday the 13th’’ franchise’s more desperate years, so he’s not unfamiliar with killing and gore for the sake of killing and gore.

In any case, with both movies Green remains indifferent to his own comic touch. Why devise comedy or craft suspense, when you can show a jaw being ripped off a mouth? The movie is never as cheeky or as fun as Green thinks it is, but he tries with all his might. Still, every boogeyman and slasher cliché this movie borrows was better somewhere else. Although it probably wasn’t grosser.