Aaron Sorkin reached out to Web surfers, other sources to fill in the blanks of ‘The Social Network’ 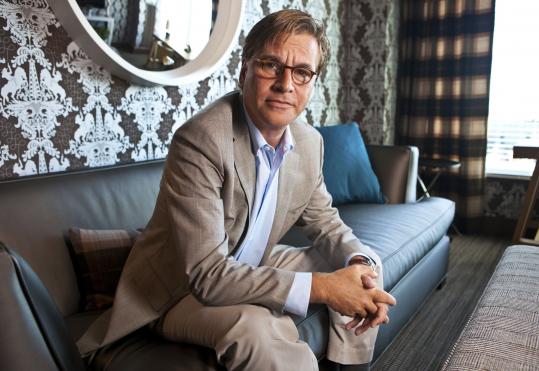 When Aaron Sorkin started researching the screenplay that would become “The Social Network,’’ one of the first things he did was set up a Facebook page, titled “Aaron Sorkin & The Facebook Movie.’’ People joined quickly, shared their Facebook stories, asked Sorkin questions about his other projects. And before long, a few of them became online friends, creating a bona fide social network so cohesive that Sorkin heard they traveled to New York to meet in person and attend the premiere.

He’s sitting in an armchair at the W Boston, hours before a screening of the film for college students, and he’s on a tear. No, he isn’t charmed by Facebook or the Internet. No, he isn’t heartened by the way it has connected people. “Of course, there’s nothing wrong with that,’’ he says. “That’s a fine, fine thing. But I don’t believe that this has brought us closer together. I think it’s pushed us farther apart.’’

It’s against this skepticism that Sorkin, 49, has spun his version of the Facebook origin story, which opens Friday. The playwright, screenwriter, and TV showrunner, who may be best known for creating “The West Wing,’’ says he was instantly drawn to Boston-based author Ben Mezrich’s book proposal for “The Accidental Billionaires.’’ It promised the tale of Mark Zuckerberg, who created Facebook in his Harvard dorm room and later faced two bitter lawsuits: one from a pair of wealthy twins who claimed he stole their idea, and the other from his former best friend, who was edged out of the company.

“It was the fastest I’d said yes to anything,’’ Sorkin says. “The themes in the story were as old as storytelling itself — of friendship and loyalty and betrayal and class and power.’’

Besides, he thought Zuckerberg embodied an archetypal, dark Internet spirit that he finds both intriguing and sad: a brand of social awkwardness that, more and more these days, is channeled into cyberspace.

“What I see out there,’’ Sorkin says, “are a lot of people who are just angry. And instead of doing what Paddy Chayefsky told them to do, which is throw open their window and shout, ‘I’m mad as hell and I’m not going to take it anymore,’ they’re doing it from the anonymity . . . of a dark room. They’re either being angry or they’re reinventing themselves as someone else.’’

Facebook, he said, facilitates that reinvention. When he first dabbled on the site, he was stunned at the posts his friends put on their walls, snappy status updates that were artifice, not truth. “They would write, ‘Had a girls’ night last night, four different desserts, better hit the gym this morning!’ ’’ Sorkin says. “I’d think, ‘You’re writing yourself as Ally McBeal. Really. You’re writing yourself as a sitcom character.’ ’’

That’s what Facebook is, he says: A cynical illusion, a version of reality that’s more pointed, more scripted, more calculated than the real thing.

This is, of course, the way Facebook officials are trying to portray “The Social Network’’ itself — as a cynical, Hollywood version of a story that, in real life, was far less dramatic. Zuckerberg, now 26, didn’t participate in the book or the movie, despite repeated pleas from Mezrich, producer Scott Rudin, and Sorkin himself — who, like Zuckerberg, grew up Jewish in New York’s Westchester County. When Sorkin met some of Zuckerberg’s lieutenants at the Hotel Bel-Air, his pitch was, “If this thing had ever gone to trial and I was in the jury pool, Mark’s lawyers would want me on the jury.’’

Still, Sorkin says Zuckerberg was wise to decline: “Now he gets to do what he’s doing, which is say it’s all fiction.’’ Indeed, the Facebook apparatus has been on a campaign to spin its own version of the story, and to point out Mezrich’s reputation for conjured scenes, rearranged timelines, and rampant speculation. A recent profile of Zuckerberg in the New Yorker reads a bit like a refutation of the Sorkin/Mezrich vision.

Sorkin says his screenplay was based on Mezrich’s proposal, but not his book: The two conducted interviews separately, compared notes periodically, and wrote simultaneously. (According to the New York Post, they also toured some Harvard final clubs together, in the name of research.)

Some catchy phrases turn up in both versions of the story. (“The Internet’s not written in pencil . . . it’s written in ink.’’) But Sorkin points out that the book and the movie, partly set and filmed in the Boston area, take vastly different approaches. Mezrich writes in chronological order, largely from the point of view of Zuckerberg’s former best friend, Eduardo Saverin. Sorkin uses flashbacks, spun out during a pair of depositions — to make it clear that the story of Facebook is disputed, and the movie isn’t taking sides.

Sorkin says he showed the script to Facebook representatives, who raised no fundamental complaints; they mostly corrected details about the mechanics of hacking.

Both Sorkin and actor Jesse Eisenberg, who plays Zuckerberg, said they also strived to channel the true psyche of the world’s youngest billionaire, a man neither has met. Eisenberg, by phone, says he read and watched everything he could about Zuckerberg and took fencing lessons, since Zuckerberg was captain of the fencing team at Exeter. His wardrobe in the film — mostly hoodies and Adidas flip-flops — was re-created from photographs and video clips of Zuckerberg in public.

And Sorkin said he learned about Zuckerberg’s motivation by talking to anonymous sources and culling the public record — including one dark, bitter blog post that turns up, nearly verbatim, in the script. Sorkin insists that Zuckerberg wasn’t driven by money; he had too many chances, untaken, to cash in along the way. Instead, he believes it was longing — to be part of Harvard’s moneyed, patrician final clubs, which were generally off-limits to geeky Jewish kids; to connect with a girl who didn’t understand him.

That’s the way the movie starts: with an argument in a bar between Zuckerberg and his girlfriend, a painful breakup that sends Zuckerberg into a fit of drunken hackery that leads, indirectly, to Facebook. The New Yorker story notes that Zuckerberg has had the same girlfriend since his sophomore year. But Sorkin says he knows, from his sources, that a dispute with a girl really happened that night.

And he says he knew, almost as soon as he started the script, that “that was going to be the last straw for Mark — that this switch was pulled that sets him down this path.’’

It sounds like the kind of epiphany that happens in the movies. But Sorkin thinks Zuckerberg saw Facebook as a proxy for his social life, an artificial world that he could finally control. And Eisenberg says he saw the character as Sorkin did: a kid who wanted to belong, and could do that best online.

“I think he feels excluded by greater society, by the way people casually interact with each other,’’ the actor says. “He feels like he’s been banished to the periphery of that. So I think he creates this environment where he feels comfortable interacting.’’

It’s a safe place, a lucrative place, this online world — though, by the movie’s end, it turns out to be a lonely place, too. And it definitely isn’t real.