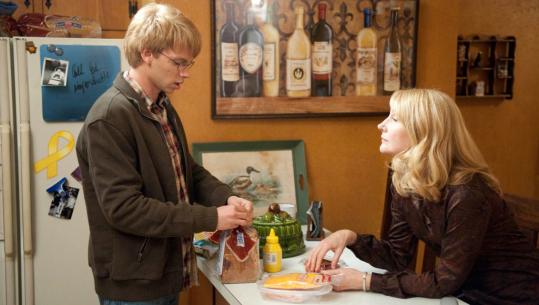 How good is Patricia Clarkson? When her big, teary monologue comes around toward the end of “Legendary,’’ an otherwise forgettable high-school wrestling movie, you realize with some astonishment that the celebrated indie actress is rousing something in you that the rest of the film has struggled in vain to evoke: genuine emotion.

John Cena looks pretty amazed, too. He’s the square-jawed, Massachusetts-bred pro wrestler who plays Mike Chetley, Clarkson’s prodigal son and the older brother of the film’s main character, 135-pound teenage weakling Cal Chetley (Devon Graye). “Legendary’’ is a product of Vince McMahon’s WWE Studios, so Cena is representing the team; he’s a massive side of beef but he looks properly cowed whenever he has to share the screen with Clarkson. And why not? She’s doing the heavy lifting here.

Interestingly, “Legendary’’ stays out of the pro-grappling sideshow to focus on amateur wrestling (also known as “real wrestling’’ to those of us who did it in high school). Cal is a bookish sort — he looks like a young Richard Thomas — who lives alone with his mom, Sharon; after getting knocked down by bullies, he signs up for the mat squad, seeking connection with his dead dad and estranged older brother, both former state champs. Screenwriter John Posey plays the coach with easygoing generic professionalism.

Unfortunately, Posey’s dialogue is generic, heavy on the inspirational platitudes and quirky one-liners from Cal’s annoyingly wacky wannabe girlfriend Luli (Madeleine Martin of TV’s “Californication’’). “Legendary’’ proceeds on well-greased rails to its expected scenes of confrontation and resolution, including revealing why Danny Glover is hanging around the background of so many scenes as a wise old fisherman who befriends Cal. The film even builds some hard-won feelings in its final scenes, thanks to Clarkson and a climactic twist that awkwardly but sincerely turns sports-movie cliches on their head.

It’s still a pretty woebegone little B flick, and journeyman director Mel Damski does absolutely nothing to make this particular sport work for the camera — he could just as well be filming badminton. 1985’s “Vision Quest’’ is still the best movie on the subject, and that isn’t saying much. Aside from a little chitchat about “reverse cradles,’’ you’ll come away from “Legendary’’ with no sense of what amateur wrestling is about. Based on what’s onscreen, the title should refer to Clarkson.