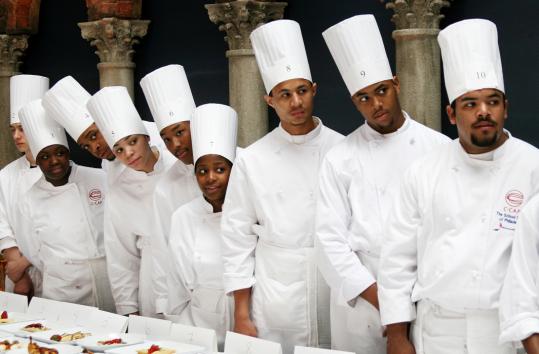 America’s most famous tough-love arts teacher is probably Ms. Grant, the dance instructor Debbie Allen played in “Fame.’’ But I really wouldn’t want to see what Wilma Stephenson would do to her. Stephenson is the culinary arts instructor at Frankford High School in Northeast Philadelphia and the core of Mark Becker and Jennifer Grausman’s “Pressure Cooker,’’ a very entertaining documentary about a year in her program. She’s a chic, light-skinned black woman with a short, sharp haircut, and of apparently small stature, although most of her male students could play a professional sport. What she lacks in height is made up for in volume.

Stephenson is various parts drill sergeant, den mother, comedian, and rogue cop. Sample: “You better [run], you lowlife punk! Run fast!’’ Every year she’s handed a group of kids — who show up presumably because they need an elective — to train for a culinary scholarship competition, and every year, she appears to have been successful. The previous year (this movie was shot in 2007) her students won about $750,000, she tells her new class. And the movie gives you a vivid sense of her devotion and tenacity.

It also illuminates how food service, at the training and entry levels, can be tedious and stressful. I never knew that those carved carrots and potatoes you have at, say, banquets have been “tournéed’’ by hand. We know this because a not-insignificant portion of “Pressure Cooker’’ is devoted to the students’ perfection of the technique. (This is a world where presentation is as important as how the food tastes.)

A great deal more of the film, which has some terrific beats by the great hip-hop producers Don Newkirk and Prince Paul, is devoted to three very different students: two charismatic women — Erica and Fatoumata, from Western Africa — and a large young football player named Tyree Dudley. Like most movies of its kind, “Pressure Cooker’’ sets out to affirm aspirations. But it doesn’t go out of its way to be inspirational. What it could have done more of is question the eating habits of these kids and whether Frankford’s culinary arts program has any effect on them. Philadelphia is a mecca of fried foods, and one of Stephenson’s mantras urges her students to free themselves of the tyranny of McDonald’s.

A lot of these young men and women harbor dreams of opening their own restaurants, but those tournéed potatoes offer a sobering reality. They aren’t the emblems of great restaurants, or even really good ones. They’re the stuff of cruise ships and room service. The movie’s sense of inspiration is realistic. It never implies a future of glamour, only hard-won success. In interviews, Stephenson has said that many of her students go into the travel-and-tourism and hospitality industries. That’s hard, unflashy, underappreciated work. But the experts know art when they see it. When Fatoumata wins a scholarship, it’s noted that her tournées looked like gems. It’s true.

Unrated (one student gets a boo-boo using a deli slicer.)