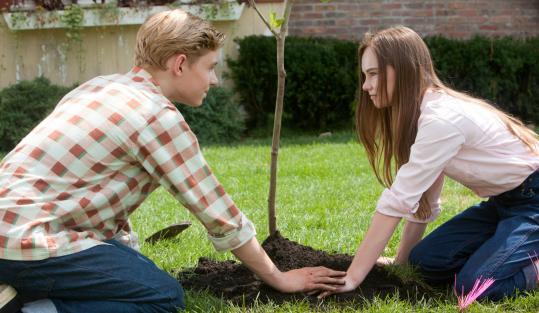 Sweet, smartly acted, and charmingly old-fashioned, “Flipped’’ is a minor pleasure that will strike a lot of moviegoers — those who think no one makes movies for them anymore — as a major treat. It’s a middle-school romance with appeal on both ends of the age spectrum and it represents a collision of early- and late-period Rob Reiner: The filmmaker with a knack for achingly life-sized Hollywood humanity (“The Sure Thing,’’ “Stand By Me,’’ “When Harry Met Sally. . .’’) and the man who can’t direct his way out of a paper bag (“Rumor Has It . . .,’’ “The Bucket List’’).

Two relative newcomers play the leads: Madeline Carroll (“The Spy Next Door’’) as Juli Baker and Callan McAuliffe as Bryce Loski, middle-schoolers and neighbors in a deceptively perfect 1963 suburbia. Juli, a nonconformist with a weekend-painter dad (Aidan Quinn), has carried a torch for Bryce since second grade, and all that time Bryce has been running from her cooties as fast as he can. But it’s eighth grade and perspectives are about to get turned on their heads, sparked by Bryce’s discovery of Juli’s moral courage and his own teenage spinelessness. Could he — horrors! — have feelings for her?

Like its source, Wendelin van Draanen’s popular 2001 young-adult novel, “Flipped’’ alternates narrators, showing us events from both Bryce’s and Juli’s points of view. It’s a gimmick that’s pithier and more insightful on the page, but in Reiner’s hand it’s cute enough, and it does allow him to access the story’s darker aspects. Juli’s parents have money troubles, since dad’s paying to keep his mentally challenged brother (Kevin Weisman, unconvincingly going the full . . . oh, never mind) in private care. Bryce’s dad (Anthony Edwards) is an embittered jerk whose sarcasm his son must learn to reject if he’s to be his own person. There are lessons here that roll out well past childhood.

So why does Reiner work so hard to keep the movie in a toothless period playground? The book was set in the present, but putting the story in the Wayback Machine for 1963 allows the director to crank up the jukebox hits (“Teenager in Love,’’ obviously, and a lot of Everly Brothers) and film everything with an over-honeyed glow. “Stand By Me’’ is a work of stark realism in comparison: When Juli climbs a patently fake-looking tree and stares dreamily out at the sunset, the vista looks like Norman Rockwell’s vision of Teletubbyland.

At its worst, this is theme-restaurant nostalgia rather than the real thing, resting on shared affection for old pop songs and fins on cars without getting at the actual emotions beyond those memories. At its best — which is often enough and more than plenty for some — “Flipped’’ is a lumpy but interestingly tough tale of young love and growing up, with a solid cast of veterans surrounding the leads. The mothers are played by Rebecca De Mornay and Penelope Ann Miller — an ’80s-movie siren and sweetie pie both gone domestic — and Bryce’s wise old granddad is given flesh and substance by a frail-looking John Mahoney (“Frasier,’’ “Moonstruck’’).

For his part, McAuliffe holds the screen well enough, but Carroll has the assurance and down-to-earth grace to mark her as something special. A lot of parents, grandparents, and older kids will love this movie, although you should probably leave the cynical teens and college crowd at home — there’s not a tattoo nor piercing in sight. (There is a little a bit of cussing, though, and one extremely weird close-up of a snake swallowing an egg.) “Flipped’’ has a warmly beating heart encased in plastic, and if you can get past the packaging, you may feel oddly, if generically, at home.

Written by: Reiner and Andrew Scheinman, based on the novel by Wendelin van Draanen