‘Centurion’ doesn’t go for the kill 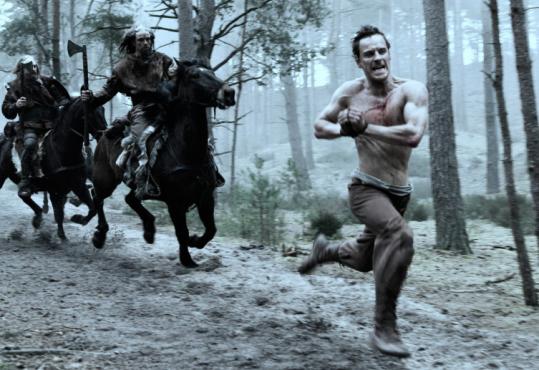 You want a movie in which starving second-century Romans dine on the contents of a dead elk’s stomach to be equally ravenous. But “Centurion,’’ a chase film written and directed by Neil Marshall, is a tame venture. Oh, there is blood and gore. Flaming arrows, spears, and knives have no problem finding their way to the back of a mouth. The profanity is delightful. And the general atmosphere is grim. The movie just isn’t terribly inspired.

“Centurion’’ takes us back to the days of the Roman conquest of Britain. The Roman Ninth Legion was looking to expand the empire into territory now known as Scotland. When an insurgent group of native tribesman, the Picts, captures one General Virilus (Dominic West), a handful of his soldiers attempt a rescue. The leader of this operation is a centurion named Quintus Dias (Michael Fassbender). Quintus has a high threshold for pain — he’s a gladiator’s son.

Tensions intensify between the Romans and this somewhat barbarous set of Picts after a soldier kills a Pict leader’s boy. From there, it is, as they say, on. The Picts sic on the Romans their top huntress (Olga Kurylenko), a mute warrior who leads a well-armed, well-pelted caravan to track them down. How a woman this physically slight manages to be so hard to kill is a mystery. But taking a page from the Milla Jovovich “Resident Evil’’ playbook, Kurylenko furrows her brow to convey that she intends to hurt you.

Along the way, a betrayal occurs, bodies pile up, and clichés are spoken (“We live united or die divided’’). And Marshall brings it all off with relentlessness and humor. The laughs are spent mostly on West’s macho general. (David Morrissey plays a Roman soldier, and Imogen Poots plays a woman with a bone to pick with the Picts.) Marshall tosses in a good joke concerning Hadrian’s Wall and even displays a flash of restraint (I, at least, was OK being spared the details of the wolf attack). What you miss from “Centurion’’ is the sense of spirit and thrill of surprise of his previous films, which include “Dog Soldiers,’’ “The Descent,’’ and “Doomsday.’’

No vampires lurk in the heather of the film’s Caledonian moorlands, as they did in the caverns of “The Descent.’’ And the kinetic and referential mayhem of the too-easily-dismissed “Destroyer’’ fails to turn up. “Centurion’’ is Marshall unplugged — and unsaturated. The movie has been made to look colorless and dry — this is one of the few action films to call out for lotion. The predominant grays and faded blues do make one urination scene theoretically funny.

You just wish there was a degree of subversion to save the film from reminding you of certain Uwe Boll productions. (Allusions to the affairs of current military superpowers feel tenuous at best.) Marshall’s movie is far more competent than, say, Boll’s “In the Name of the King’’ but less fun. Barring the occasional hurtling spear, there’s no more to “Centurion’’ than meets the eye.

Correction: An earlier version of this review misstated the name of a film. It is called "Doomsday."

Written and directed by: Neil Marshall