A formula take on heist movies 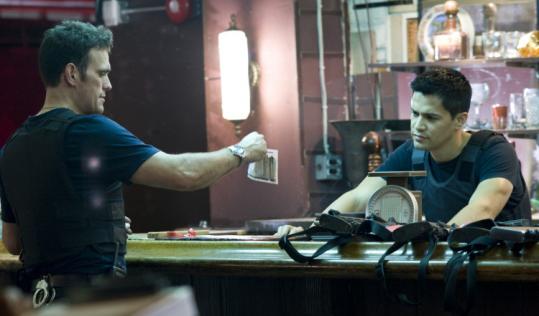 “Takers’’ might have made a perfectly decent little B heist movie, but someone had to go and forget to give the cameraman his Ritalin. Since the film is about 45 percent chase scene and 45 percent frenzied shootout — the other 10 percent is strained macho posturing — that’s an awful lot of blurry, whip-pan action defying you to make visual sense of it. Who’s zooming who? Where’s Waldo? Where’s the script?

Too bad, as some decent actors are lost amid the cross-cutting. “Takers,’’ directed by John Luessenhop and written by him plus a committee, pits a preposterously high-rolling crew of Los Angeles bank robbers against a raspy-voiced LAPD detective who loves his job too much (to the point of taking his daughter along on a high-speed chase). Matt Dillon’s the cop and he leaves his sense of wit at home, knowing there’s nothing in his dialogue that calls for it.

The gang is headed up by Gordon, whom the British actor Idris Elba plays with the solid, leonine grace of a natural leader. Michael Ealy (“Barbershop’’) and R&B star Chris Brown play brothers, the latter acquitting himself acceptably in his first major movie role (he does more running than acting, when all is said and done).

Hayden Christensen, the former Lord Vader himself, is the crew’s designated strategist and hipster, noodling jazz piano chords under a porkpie hat. Paul Walker plays Gordon’s second in command; nine years after “The Fast and the Furious’’ made him a star, he remains an actor in search of a personality.

As a group, they love expensive suits, fine Scotch, and high-end cars; the opening scenes of “Takers’’ are more like an Centurion Card commercial than a movie. The reappearance of a former partner sets things in motion: “Ghost’’ (rapper Tip “T.I.’’ Harris) has been in jail planning a major armored truck robbery — or maybe revenge against his old friends — and he enlists the help of some slavering, deracinated Russians. In a movie like this, never trust the Russians.

You would never guess that Zoe Saldana, costar of the most profitable movie of all time (“Avatar’’), is in “Takers,’’ since she gets two scenes as Ealy’s girlfriend and isn’t mentioned in the marketing. And, mercy, is that onetime Oscar nominee Marianne Jean-Baptiste as Gordon’s crackhead sister? But this movie is mostly just about men sneering and flexing at each other, occasionally breaking out into fits of heavy artillery. The climactic shoot-out in a hotel room, pillow feathers and Russians flying every which way in slow-motion, is hands down the most ridiculous action sequence of the year.

All told, it is formula stuff, tricked up with over-edited attitude and worth watching only for Elba’s smolder, Dillon’s professionalism, and T.I.’s odd anti-charisma; he’s so repellent you can’t take your eyes off him. Otherwise, “Takers’’ is a tough-guy bore. I’ll stick with the Expendables; at least they know they are a joke.

Ty Burr can be reached at tburr@globe.com. For more, go to boston.com/movienation.